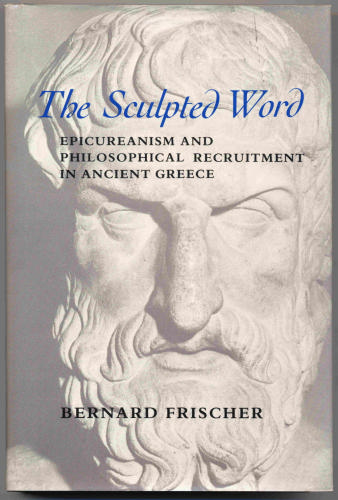 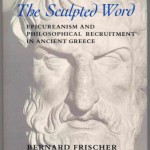 The topic of memorable rings has come to my attention today, and that reminds me to discuss another aspect of Epicureanism:  the use of images of Epicurus and Epicurean inscriptions on rings, cups, and other mementos.

Bernard Frischer’s book “The Sculpted Word” provides an excellent background into the use of images by the ancient Epicureans as both a self-help device and a device for recruitment of new converts to the philosophy (the very idea of recruitment being contrary to the view of Epicureanism as hermitic).  The Sculpted Word focuses largely on the monumental seated sculptures of Epicurus himself, a number of which survive at least in pieces from antiquity.  In addition, Cicero records the use of rings and cups apparently used in a similar way.

The question I would like to pose today is the title of the post “What Would You Like Inscribed On Your Epicurean Ring?”  An image of Epicurus is the first obvious choice.  Munro records in the overleaf to his translation of De Rerum Natura the existence of an oval ring bearing an image that appears to be marked as that of Lucretius.

We also have busts of Metrodorus and Hermarchus that survive from Herculaneum, so images of those important Epicureans are also available.

But what if you wanted a more simple ring inscribed with only a particularly meaningful phrase?  What would that phrase be?  Any number of the Authorized Doctrines or the Vatican Sayings lend themselves to this, but selecting one short enough to use is a little trickier.  Here are a couple that come to mind:

At present I think my favorite would be one of the first two, as I think of those as starting points on which the rest of Epicureanism is erected.  Nothing can be created from nothing because a ring is something physical that can be touched, something which has a clear and certain reality, a tangible example that nothing is created from nothing, which leads to all the other physical observations about the universe.  Death is nothing to us, as a constant reminder that all the pleasure we seek must be experienced while we live, and that it is worse that folly to worry about a past or future existence of the soul.

I would be interested to know your thoughts and suggestions!

Previous ArticleMysticism, The Gods, And the Epicurean Rules of Evidence
Next ArticleA Useful Recent Translation of Lucretius’ “On The Nature of Things”