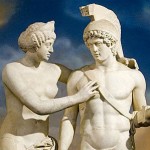 Ceremonies, monthly observations of the Twentieth in honor of Epicurus, portraits, rings, cups, artwork, etc., are all useful devices for reminding ourselves about these aspects of the universe.  Such methods may seem to some like crossing over into “mysticism,” but this would not be true.  Recall the opening of Book I of De Rerum Natura.  The lengthy “hymn to Venus” is often considered un-Epicurean, but the above observations support the view that it is our own misunderstanding, not Lucretius, which is to blame for the confusion.  It is not un-Epicurean to hold firmly to the view that gods exist. It is not un-Epicurean to personify Nature by considering a goddess of love (Venus) to be the driving force of all living things. It is not un-Epicurean to consider, as in the opening of Book VI, that we are able to receive beneficent images of the gods if we simply understand their true Nature.

Some argue that these kind of references were either (1) a “sugar-coating” to appeal to the common people enamored with mythology or (2) a protective device to protect the Epicureans from being labeled as atheists and persecuted under anti-atheism laws.  Both arguments suffer from the fatal flaw of failing to take seriously the whole of Epicurean theory.  It is not a sound objection to say that Epicurean allusions to the gods are vague or overly-broad; instead, they are best viewed as the logical conclusions of Epicurus’ “rules of evidence.”  In compliance with those rules, Epicurean observations about the gods go further than the evidence allows, but the fact that they are limited in scope takes nothing from the seriousness and earnestness with which they were held.
Previous ArticleA Few Comments On An Excellent Introductory Article
Next ArticleWhat Would You Like Inscribed On Your Ring?