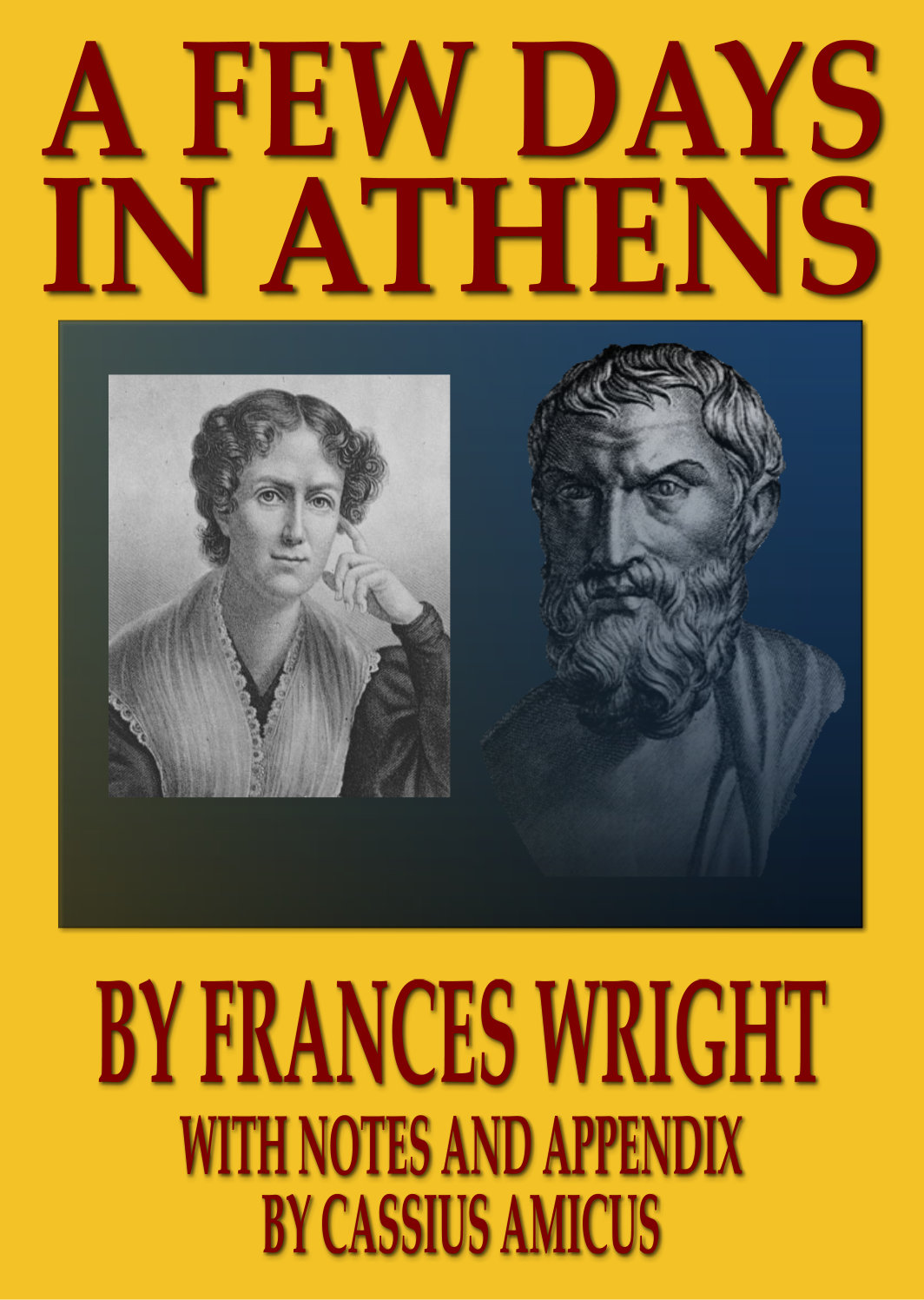 One of the great benefits of studying online is to receive the assistance and suggestions of others, and I am indebted to Ed Lee for directing my attention to what I now consider one of the most important books on Epicurus ever written. I am embarrassed to say I had never heard of it previously, especially since Thomas Jefferson is recorded to have called it “a treat to me of the highest order.” The only excuse I can offer is that the title, A Few Days In Athens, does not reveal that the subject is not ancient Athens in general, but Epicureanism in particular. I also have to plead ignorance in failing to recognize the name Frances Wright as a contemporary and friend of Thomas Jefferson and Lafayette, or as a writer on any particular subject whatsoever.

When Ed asked me eleven days ago if I had ever heard of the book, and I saw this link where it is available free on the internet, I immediately 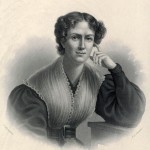 was amazed by what I was reading. I am going to tone down my enthusiasm here, but A Few Days in Athens is the a brilliant dialogue, in the style of Plato or Lucian, that presents in sweeping and engaging form a full defense of Epicureanism that really does seem worthy to have been written by a Lucretius or a Metrodorus. I am still amazed (and admit to harboring some doubt) that someone only twenty-six years old at the time could have written such a mature explanation of Epicurean thought. Thomas Jefferson raved over it, and if you have never heard of or read this book, I urge you to read it, as I believe you will rave too.  [For a biography of Frances Wright see here.]

A Few Days In Athens needs to find a place in your library of Epicurean books, and I will be blogging much further about it and Frances Wright (a fascinating character!) in the future. But I have to note a couple of problems I have with it, where it appears to me that Wright put words in Epicurus’ mouth that are more consistent with eighteenth and nineteenth century views of materialism than with the ancient texts. It’s for that reason that I did not blog about the book immediately when I read it. I think this book deserves a close reading and close study by every fan of Epicurus, but – like me – I think you will find a couple of points that need explanation, if not correction.

So before posting this entry, I wanted to write an “introduction” to the book. Then, since I found that the epub version available on the internet is full of scanning errors, I decided to re-transcribe the original text, wrap it into an introduction and appendix, and release it as a separate epub. I am still in the final editing stages, and too many errors remain, but the ebook has reached the point where I can’t hold back from releasing it any longer. I very much want others who study Epicurus, and who may not know about this book, to have a chance to read it and offer their commentary. Much research needs to be done into Frances Wright and how this book came to be about. We need to know what was the reaction to it, and whether or not Wright followed up with any further Epicurean writing – and if not, why not!

A Few Days In Athens is an experience you won’t forget. And to make it more unforgettable, I have converted it to a speech-to-text edition available at the links below. Now you can spend over four glorious hours immersed in a fictional but faithful version of the ancient Garden, and hear not only Epicurus, but also Metrodorus, Hermarchus, Leontium! and others speak for themselves. And from there it gets better, as we hear Epicurus face down the mighty Zeno and the Stoics, put a stinking Cynic in his place, and denounce the outrage of religion in words that you will long remember! Yes, the text is fictional, but with the caveats I note in my introduction, I still have to call it brilliant.

I have begun moving my epubs to Amazon, and a version of this is available there. But a free version of A Few Days In Athens will always be available here, as:  (1) Standard EPUB, and (2) Kindle MOBI.

Also, below are links to the audio MP3 files so you can download to your music player, plus in a form that may be more convenient, I have produced a video version (that is mostly audio) at Vimeo at the link below.

A Few Days In Athens – Chapters 1 – 4 from NewEpicurean on Vimeo. Other chapters may be found by following this same link)

Here is my “Introduction”:

INTRODUCTION BY CASSIUS AMICUS
Frances Wright was born in Dundee, Scotland, on September 6, 1795, one of three children of a wealthy linen manufacturer. She became an orphan at age three, and was raised by an aunt in England. At age sixteen, she returned to Scotland to live with her great-uncle, a professor of Moral Philosophy at the University of Glasgow.
In 1818, Wright traveled to the United States, where she published and produced a play on the subject of Switzerland’s struggle for independence. After returning to Scotland in 1821, she published the work for which she became well known, a story about her travels entitled Views of Society and Manners in America.
In 1821, Wright published A Few Days in Athens, supposedly at the insistence of the Marquis de Lafayette, who later became her travel companion when she returned to America. Lafayette forwarded a copy of this work to Thomas Jefferson, who replied to him in 1823, with the following:
I thank you much for the two books you were so kind as to send me by Mr. Gallatin. Miss Wright had before favored me with the 1st edition of her American work: but her ‘Few Days in Athens’ was entirely new, and has been a treat to me of the highest order. The matter and manner of the dialogue is strictly antient; the principles of the sects are beautifully and candidly explained and contrasted; and the scenery and portraiture of the Interlocutors are of higher finish than any thing in that line left us by the antients; and, like Ossian, if not antient, it is equal to the best morsels of antiquity. I auger, from this instance, that Herculaneum is likely to furnish better specimens of modern, than of antient genius; and may we not hope more from the same pen?
Wright gave A Few Days In Athens the subtitle “Being the translation of a Greek manuscript discovered in Herculaneum,” and she referred to herself in the introduction as “translator.” This was but a literary device, however, as the work was entirely modern.
A Few Days In Athens is composed in the style of an ancient dialogue by a Plato or a Lucian. As Thomas Jefferson stated, the story is “beautifully and candidly explained,” but the text is deep with allusions to the views of competing schools of philosophy. These allusions give the work much of its charm, but will be unfamiliar to many modern readers. It is therefore worth spending a few moments to review the general background and nature of the disputes between the major schools of philosophy – disputes that continue little changed to this very day.
The setting of Wright’s story is ancient Athens, and the main character is Theon, a young man from Corinth, whose father has sent him there for an education. Theon’s father favored the school of Plato, known as “the Academy,” but after arriving in Athens, Theon’s loyalty has been won by the school of Zeno, known as “the Stoics,” and also referred to by its nickname of “the Porch” or “the Portico.” Also mentioned are the school of Aristotle and Theophrastus, known as the “Peripatetic” or “the Lyceum,” and the schools of Pythagoras and of the Cynics. Each school has unique characteristics, but they are united in their common contempt for Epicurus, the son of Neocles, also referred to as “the Gargettian,” and whose school was known as “the Garden.”
A truly satisfactory review of the disputes between these schools is beyond the scope of this introduction, but readers should be aware that, in general, and to a greater or lesser degree, each of the non-Epicurean schools held the following:

Epicurus disputed each of the above points with vigor, but often with subtlety, in a way readers both ancient and modern find to be unfamiliar and challenging. For example, in regard to the existence of gods and fate, Epicurus did not simply deny that these existed. Instead, Epicurus determined that the “rules of evidence” that men were following were incorrect, and that the evidence in fact pointed in another direction. He concluded that words such as “gods” and “fate” and “virtue” need not be discarded, but should rather be cleansed of their inaccuracies, while the elements of truth that they held should be retained and described with greater accuracy. This process led him to the following conclusions:

Notes:
(1) Footnotes added by the current editor are preceded with a “CA:” to indicate that they were not in the original text.
(2) Some spellings have been modernized, such as “dropped” for “dropt,” but otherwise the text has been altered as little as possible. All such changes have been compared to my personal copy of the Boston edition published in 1877, but scans of the original editions are readily available on the internet for comparison.
(3) I want to note my particular thanks to a friend, Ed Lee, for first making me aware of the existence of A Few Days In Athens.