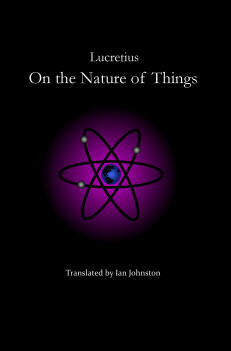 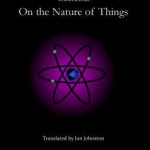 Until today I was unaware of a 2010 edition of On The Nature of Things produced by Ian Johnston and available at the website linked here.  That site states:  “Ian Johnston’s new poetic translation brings out the full emotional range of this great work and captures the restless and intense urgency of the original text. The English is an accurate rendition of Lucretius in a fluent modern idiom, so that it makes this important vision of the world accessible to the modern reader. The translation includes notes to assist the reader who is encountering Lucretius for the first time.”

The thing that immediately impresses me is that this translation states that it is based on the Latin text of  H.A.J. Munro.  My initial review is that though there are significant differences in their versions, Johnston also chose to follow Munro’s lead in preferring understandability over preservation of a lyrical form.  Munro’s edition is available in original form on the NewEpicurean website here and on Google Books.  (Note:  I came across this information about the level of Munro’s scholarship.  Wow – just wow.  I suspect that it is very unlikely that we have many modern scholars who can afford to devote the lifetime of work is classical studies to equal what someone like Munro was able to achieve.)

One of the great virtue’s of Munro’s classic edition is that he did not sacrifice clarity and fidelity of meaning for the sake of shoe-horning the English text into a forced lyrical form.  Thus Munro preserved the meaning better than most versions which are readily available on the internet, such as that of William Emory Leonard.  On first glance it appears that Johnston’s version also favors clarity over poetry.

This Johnston version is also available as an audiobook read by Hugh Ross here.  For me, the definitive voice of Lucretius will always be Charlton Griffin, and I am not sure how I am going to warm up to Hugh Ross’ “refined” English accent.  The version read by Griffin, however, was the translation by Rolfe Humphries, and in my personal view Humphries’ version, though more clear than most, takes needless liberties with important portions of the text that are best understood in as close to the original meaning as possible.  Munro’s mission seems to have been accuracy above all, and to the extent that Johnston followed Munro in this choice as well, I am hopeful that we have here a valuable new English version of Lucretius’ text.

As a test to compare the versions, here is one of the key sections from Book I, first in the Munro edition (I have not preserved the line breaks):

When human life to view lay foully prostrate upon earth crushed down under the weight of religion, who showed her head from the quarters of heaven with hideous aspect lowering upon mortals, a man of Greece ventured first to lift up his mortal eyes to her face and first to withstand her to her face.  Him neither story of gods nor thunderbolts nor heaven with threatening roar could quell: they only chafed the more the eager courage of his soul, filling him with desire to be the first to burst the fast bars of nature’s portals. Therefore the living force of his soul gained the day: on he passed far beyond the flaming walls of the world and traversed throughout in mind and spirit the immeasurable universe; whence he returns a conqueror to tell us what can, what cannot come into being; in short on what principle each thing has its powers defined, its deep-set boundary mark.  Therefore religion is put underfoot and trampled upon in turn; us his victory brings level with heaven.

Here’s the same selection, from the Ian Johnston version:

When to all eyes men’s life lay foully crushed throughout the land beneath the heavy burden  of religion, who, from heavenly regions would show her head, menacing mortal men with her hideous face, a Greek man was the first who dared raise his mortal eyes against her, the first one to oppose her, undeterred by stories of the gods, by lightning strikes or menacing rumbles from the heavens.   Instead, with even greater eagerness  he roused his spirit’s keen intelligence,  to answer his desire to be the first to break the narrow bolts of nature’s doors.   And so the living power of his mind  won out, and he moved forward, far beyond the flaming bulwarks of the world, and then, in his mind and spirit, made his way through the boundless immensity of all things.  From there, triumphant, he brings back to us what can come into being and what cannot, and finally the processes by which the power of each thing has boundary stones, a deep-set limit.  And so religion, in its turn cast down, is thrown underfoot. This victory makes us heaven’s equals.

As I write this I can certainly observe significant differences in the two versions.  While I defer to Munro on scholarship in absence of evidence to the contrary, Johnston’s version seems to me to preserve much the same meaning, and succeeds in doing so in a way that is much more understandable than that of Leonard.  Here is the same section by Leonard, this time preserving the line breaks, since Leonard emphasized the poetic form at the expense of literal meaning:

Whilst human kind
Throughout the lands lay miserably crushed
Before all eyes beneath Religion – who
Would show her head along the region skies,
Glowering on mortals with her hideous face-
A Greek it was who first opposing dared
Raise mortal eyes that terror to withstand,
Whom nor the fame of Gods nor lightning’s stroke
Nor threatening thunder of the ominous sky
Abashed; but rather chafed to angry zest
His dauntless heart to be the first to rend
The crossbars at the gates of Nature old.
And thus his will and hardy wisdom won;
And forward thus he fared afar, beyond
The flaming ramparts of the world, until
He wandered the unmeasurable All.
Whence he to us, a conqueror, reports
What things can rise to being, what cannot,
And by what law to each its scope prescribed,
Its boundary stone that clings so deep in Time.
Wherefore Religion now is under foot,
And us his victory now exalts to heaven.

In my own case, I came across the Leonard edition several times over the years, and always put it aside as hopelessly obscure.  It was not until I listened to the Charlton Griffin audiobook version of Rolfe Humphries’ version that I broke through to seeing the depth of the material.  Here, in comparison is the Humphries version of the same text:

When human life, all too conspicuous,
Lay foully groveling on earth, weighed down
By grim Religion looming from the skies,
Horribly threatening mortal men, a man,
A Greek, first raised his mortal eyes
Bravely against this menace. No report
Of gods, no lightning-flash, no thunder-peal
Made this man cower, but drove him all the more
With passionate manliness of mind and will
To be the first to spring the tight-barred gates
Of Nature’s hold asunder. So his force,
His vital force of mind, a conqueror
Beyond the flaming ramparts of the world
Explored the vast immensities of space
With wit and wisdom, and came back to us
Triumphant, bringing news of what can be
And what cannot, limits and boundaries,
The borderline, the bench mark, set forever.
Religion, so, is trampled underfoot,
And by his victory we reach the stars.

Certainly Humphries takes his own liberties with the text, but in my view he preserves the meaning with a force and style — and a choice of words — that seems true to the original.  Humphries’ version not only reads well to the eye, but in the voice of Charlton Griffin the meaning jumps out even more clearly.

I hope to supplement this post with additional commentary as I listen to the audiobook and review the text of the Ian Johnston, but at least at this point I see this work as a valuable addition to the library of anyone interested in the study of Epicureanism.

Previous ArticleWhat Would You Like Inscribed On Your Ring?
Next ArticleIn Memory of the Great Classical Translator of Lucretius: Hugh Andrew Johnstone Munro