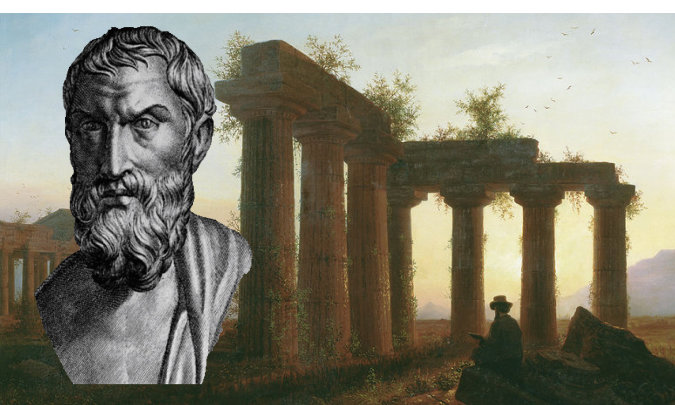 In a recent discussion a friend wrote: “Cassius’ fictional man who suggests suicide to prevent desires is, as Elli Pensa said, a very ridiculous man.”

Consider also another statement from Epicurus:  “When we say, then, that pleasure is the end and aim, we do not mean the pleasures of the prodigal or the pleasures of sensuality, as we are understood to do by some through ignorance, prejudice, or willful misrepresentation. By pleasure we mean the absence of pain in the body and of trouble in the soul.“  Does this not mean that Epicurus held “absence of pain” to be the very meaning and content of pleasure?

In answering both questions, the Epicurean thinker must never commit the error of losing the full context of the discussion: the “healthy living” of a human being.

We cannot and should not take single ideas and isolate them in the abstract, as if we are in a Platonic world of forms.  Healthy bodies and souls are not disembodied ideas – they are bodies and souls that are functioning according to their design and capacity.  Every aspect of Epicurean philosophy presumes that what we are discussing is the art of living – the art of human beings functioning according to the capacities for which Nature designed them.  As Torquatus argued to Cicero:

You are pleased to think [Epicurus] uneducated. The reason is that he refused to consider any education worth the name that did not help to school us in happiness. Was he to spend his time, as you encourage Triarius and me to do, in perusing poets, who give us nothing solid and useful, but merely childish amusement? Was he to occupy himself like Plato with music and geometry, arithmetic and astronomy, which starting from false premises cannot be true, and which moreover if they were true would contribute nothing to make our lives pleasanter and therefore better? Was he, I say, to study arts like these, and neglect the master art, so difficult and correspondingly so fruitful, the art of living?  (De Finibus)

One of the designs and capacities of a human being that is most essential to our art of living is desire. Contrary to what eastern religions and some philosophies suggest, there is nothing wrong with desire.  So long as the desires are functioning according to the design and capacity of the organism for living in a state of health, desires are essential, and lack of desire is the threshold of death.

Closely related to desire is pleasure. Contrary to those same anti-Epicurean religions and philosophers, there is nothing wrong with pleasure.  Epicurus held that all pleasure is “good.” But he also held that pleasure, like desire, must function in accord with the design and capacity of the organism if that organism is to continue in a state of vigorous health.

In all life, the desire for pleasure continues so long as the organism survives. But does that fact – that more pleasure can always be added – mean that pleasure is not itself the highest goal of life? Prominent pre-Epicurean philosophers argued just that, but said Epicurus said “No – it doesn’t mean that.”  Epicurus observed  that human beings are designed to function in a certain way, and with certain natural capacities.  This design entails the goal of desiring the maximum of mental and physical pleasure in its total experience, and the minimum of pain.  The goal of Nature – the highest and most vigorous functioning of a human being – is therefore to live at “full steam ahead” of both mind and body – experiencing all of innumerable mental and physical pleasures which can be experienced while unhindered by any degree of pain.  Pleasure does have a natural limit, and Epicurus made the point with extreme precision:  “The magnitude of pleasure reaches its limit in the removal of all pain. When such pleasure is present, so long as it is uninterrupted, there is no pain either of body or of mind or of both together.”  (PD3)  Stripped from its context, this statement is puzzling at best.  But seen as the answer to the Platonic / Aristotelian objection that “because pleasure can never be quenched, pleasure cannot be the ultimate goal of life,” it is extremely clear.

The goal of a living being is not to struggle towards an anesthetized catatonic state of zero, where neither pain, nor joy and delight can any longer be felt.  If that were true, who could argue against suicide as the proper course? Epicurus saw this clearly, and wrote to Menoeceus: “Much worse is he who says that it were good not to be born, but when once one is born to pass quickly through the gates of Hades. For if he truly believes this, why does he not depart from life? It would be easy for him to do so once he were firmly convinced. If he speaks only in jest, his words are foolishness as those who hear him do not believe.”

The goal of a living being is the experience of continuous pleasure – an active state of full vigorous health of body and mind.   I summon you to continuous pleasures, and not to vain and empty virtues which have but a desperate hope for rewards.  (Fragment of Epicurus to Anaxarchus)

Active, full, vigorous health is characterized by the experience of every pleasure within reach of the organism that can be experienced without generating an amount of pain that offsets the benefit of that pleasure.  Therefore Epicurus never labeled any pleasurable activity as intrinsically bad.  Instead, Epicurus held “No pleasure is a bad thing in itself, but the things which produce certain pleasures entail disturbances many times greater than the pleasures themselves.” (PD8)

Even fame and political power, which modern commentators opine incorrectly that Epicurus flatly condemned, are to be evaluated by the same standard.  Epicurus did not say that we should never seek fame or political power, only that fame and power generally – but not always – bring more pain than they are worth: “Some men want fame and status, thinking that they would thus make themselves secure against other men. If the life of such men really were secure, they have attained a natural good; if, however, it is insecure, they have not attained the end which by nature’s own prompting they originally sought.” (PD7)

Epicurus named the principle to apply with striking clarity in this saying: “Question each of your desires: “What will happen to me if that which this desire seeks is achieved, and what if it is not?”  (VS 71)

What about the much-trumpeted claim that Epicurus was  so devoted to such simple living that his example would make a Stoic blush?  The truth is otherwise, for Epicurus said:  “There is also a limit in simple living, and he who fails to understand this falls into an error as great as that of the man who gives way to extravagance.”   (VS 63)  Simple living is not always good, nor is luxurious living always bad.  What is always true is that the goal is net maximum pleasurable living, and it is necessary to examine every “choice and avoidance” to see whether the particular activity at the particular time under the particular circumstances will lead to greater or lesser net happiness.

We are not – nor should we aspire to be – mindless Aristotelian robots, mercilessly (and mercinarily) working to calculate artificial formulas toward an imaginary “eudaemonia.”  Nor are we mystic Pythagorean mathematicians, intent on chanting our way to discerning the meaning of life in the number “53.”  We are human beings with a physical and mental nature set by Nature, of which the desire for pleasure is the guiding component. It is our responsibility to look to Nature as our example, and to see to it that our minds and bodies are “healthy” rather than “unhealthy.” Dux vitae, dia voluptas – Guide of Life, Divine Pleasure. (Lucretius)

To embrace suicide as a means of eliminating desire and pain would be no less folly than to embrace a definition of pleasure as consisting of nothing more than the absence of pain. Neither pain nor pleasure, nor simple or extravagant desires, have any meaning except in regard to the goal of healthy vigorous living.

Computers and dialecticians have no vision of pleasure as their overriding goal, so they cannot see the forest of healthy living from living trees that compose it.  Platonists and Aristotelians and Stoics can play logical “dialectical” games as long as they wish, but they reject the true meaning of human health, so they can never serve as competent doctors.

It is time to look deeper into what Epicurus really taught, and to let misguided modern religions and false philosophies – including those which seek only “absence of pain” – wander off into the twilight from which they came.

As Epicurus said, “It is not the pretense but the real pursuit of philosophy that is needed; for we do not need the semblance of health, but rather true health.”  (VS 54)

Previous ArticlePeace and Safety For Your Twentieth of February: Epicurus vs. Aristotle and Plato on Pleasure
Next ArticleOf Mice, Syllables, Thermometers, and The Complete Life