The usefulness of every bullet-point list has to be judged by its context and its target. The 40 Authorized Doctrines, for example, were clearly compiled for people who had a significant prior understanding both of Epicurean theory and general philosophical issues. The key Epicurean principles of physics that are necessary to the conclusions were not included at all, and canonics / epistemology is mentioned only briefly. With that background I want to prepare a graphic that summarizes in very brief but very clear terms some of the most important take-aways that a person who knows nothing about Epicurus would find most important. I have prepared this draft list as a start. Each item needs to be short but clear, and that’s why I have not used any words like “canonics” or “anticipations” or even “truth,” which are ambiguous at best and bewildering to most people.

As an example of my thinking, I have been considering including: “The Universe Is Eternal and Infinite, and Life Does Not Exist Only on Earth.” However such a statement is long, not necessarily related to “ethics,” and would probably appeal to more of a “geeky” audience (like myself maybe) rather than to a general reader.

There’s no magic number, and I will probably mix and match lists according to the context in which I use them, but your thoughts and suggestions for pithy statements of key points would be appreciated! Think about the points that are most meaningful to you.

1- There Are No Supernatural Gods.
2- There Is No Life After Death.
3- The Goal of Life Is Happiness.
4- Happiness Is The Consciousness of Feelings Of Pleasure Predominating Over Feelings of Pain.
5- Pleasure and Pain Are Both Physical And Mental, Of Which The Mental Is More Intense.
6- Pleasure Is To Be Pursued And Is The Guide of Life.
7- Pain is To Be Avoided But Is To Be Accepted For the Sake of Happiness.
8- All Actions Are To Be Judged By The Total Pleasure Or Pain Which They Bring Over Time.
9- Actions Are Not Subject To Absolute Standards Of Reason, Virtue, Piety, Or Justice.
10- Actions Are Reasonable, Virtuous, Pious, Or Just Only Insofar As They Lead To Happiness. 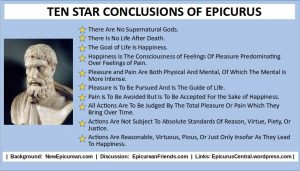