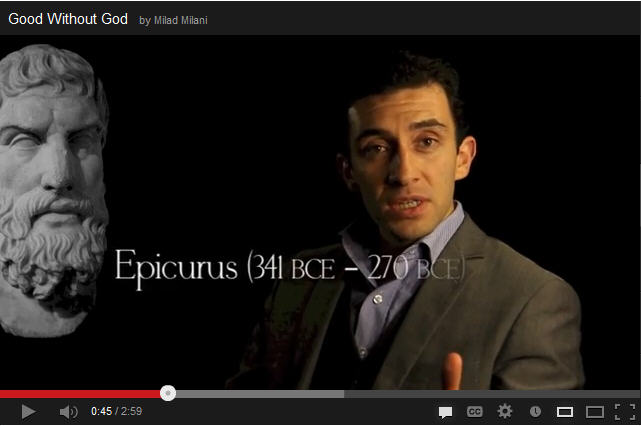 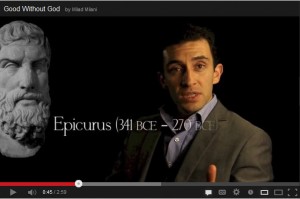 Today I received a very nice email from a reader of the blog who resides in Australia, and he provided me a link to a video series he produced entitled “Good Without God.”   He is Dr. Milad Milani from the University of Western Sydney, and the theme of his series is how it is very possible to be “good” without the traditional idea of “god.”  Here is the blurb which describes the concluding video of his series:

‘Good without God’ is a new series from Inside Religion compiled in conjunction with Allied Media Australia. The series looks at what it means to be good without being religious or believing in God. The program explores religious, atheistic and humanist themes, asking about the future of religion in the life of ordinary people. In the final segment of the program, the idea that religion is a natural by-product of the human species comes full circle. Yet it may be that religion is a pre-modern utility that only sticks around by virtue of sentimentality and superstition.”

Dr. Milani’s video series is very well produced and I highly recommend it!   I have no criticisms (as if I were qualified to give any 😉 ) but I do have a suggestion for viewers of the video and perhaps for Dr. Milani’s future videos:

As you watch this, I suggest you ask yourself:  “What do you presume the meaning of “good” to be?  What do you presume the meaning of “god” to be?”  Dr. Milani proceeds through the series as you would expect, accepting the ordinary definitions and reaching excellent conclusions based on those definitions.   He of course concludes that there can be “good” without “god,” and in the ordinary context he is certainly correct and the videos are very useful.

What I am finding as my own research into Epicureanism proceeds, however, is that it is essential to define what we mean by both of these two — both “good” and “god.”  And it seems to me now that the fight over the meaning of these two terms goes right to the heart of Epicurus’ challenges to the orthodox academics and religionists.

It is not necessary to belabor the point on “god” — Epicurus was very clear that he was not an atheist, and he did believe in “gods” — but his definition of god did NOT include “supernatural,” “all-powerful,” or any other attribute that would place a god outside or above Nature.   For those who want to complain that “this is not the standard definition,” I simply will cite Epicurus himself, who cared more for truth and accuracy than for satisfying the crowd:  “VS 29. To speak frankly as I study nature I would prefer to speak in oracles that which is of advantage to all men even though it be understood by none, rather than to conform to popular opinion and thus gain the constant praise that comes from the many. “  In short, Epicurus conformed his definitions to the truth as established by the evidence of Nature, not to the consensus of the crowd, the schoolteachers, or the conjurers.

And the point about “good” is equally important.  “Good” is like “virtue” — it does not exist.  This is a topic  that is permeating much of my recent work and many recent posts, so I will not belabor it here.  I’ll leave the point with one of my recent favorite quotes, the last words of the dying Brutus after the battle of Phillipi:  “O wretched Virtue, thou wert but a name, and yet I worshipped thee as real indeed; but now, it seems, thou were but fortune’s slave.”  Do I need to expand on this?  “Virtue” and “good” are only names; they exist only in the minds of the priests and false philosophers.  Your challenge as an Epicurean is to see how important it is to rid your mind of nonsense words such as these!

Previous ArticleExplaining the True Nature of Life as a Pleasure: The Example of the Statue’s Hand
Next ArticleOn Long And Short Arguments, Vatican Saying 26, And Lucretius