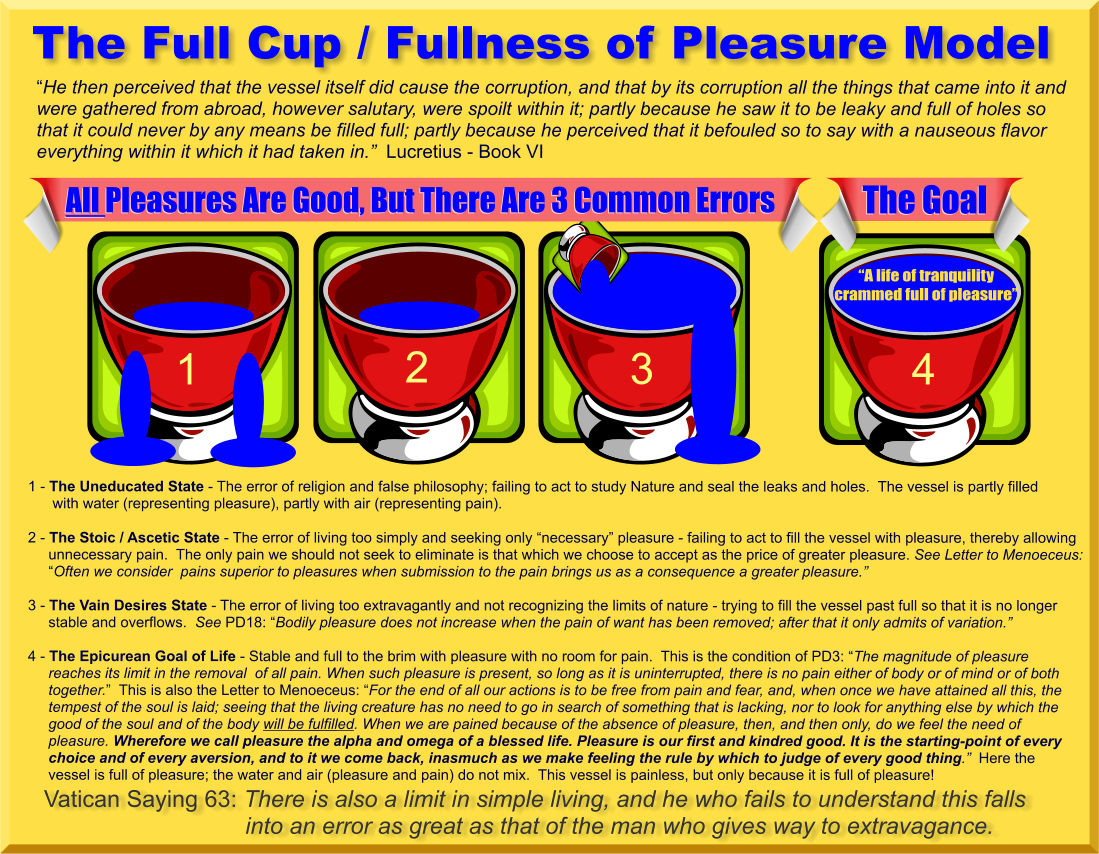 PD3: The limit of quantity in pleasures is the removal of all that is painful. Wherever pleasure is present, as long as it is there, there is neither pain of body nor of mind, nor of both at once.

It is my view that the key to understanding this doctrine is to understand the argument to which it and PD 18 appear to be addressed. Epicurus advocated pleasurable living as the goal of life as against those who advocated “virtue.” The proponents of “virtue” liked to argue virtue cannot be made better, but pleasure can, and that a thing that can be made better cannot be the highest good. Here is the argument as stated by Seneca in letter 66 of his letters to Lucilius:

Therefore the power and the greatness of virtue cannot rise to greater heights, because increase is denied to that which is superlatively great. You will find nothing straighter than the straight, nothing truer than the truth, and nothing more temperate than that which is temperate. Every virtue is limitless; for limits depend upon definite measurements. Constancy cannot advance further, any more than fidelity, or truthfulness, or loyalty. What can be added to that which is perfect? Nothing otherwise that was not perfect to which something has been added. Nor can anything be added to virtue, either, for if anything can be added thereto, it must have contained a defect. Honour, also, permits of no addition; for it is honourable because of the very qualities which I have mentioned. What then? Do you think that propriety, justice, lawfulness, do not also belong to the same type, and that they are kept within fixed limits? The ability to increase is proof that a thing is still imperfect.

“The ability to increase is proof that a thing is still imperfect.”

PD 3 and PD 18 provide the answer. Both of these point out that pleasure cannot be increased past the point where pain and turmoil are removed from life. But this is not the end of the story. The wider picture is the analogy (given explicitly at the beginning of Lucretius’ Book 6) that life is like a vessel that is leaky and full of holes and cannot be filled (all air cannot be expelled) due to those leaks and holes. The vessel of life is filled to its highest capacity – perfection – when that vessel has been filled with pleasure (the liquid content) and emptied of all pain (the air in the top of the vessel below the rim).

The implication of this analogy is that absence of pain (aponia) and absence of turmoil (ataraxia) are not mystical undefined states that are so esoteric that they can only be expressed in Greek words of negation. Rather, these words simply describe the state of the vessel of life when it is filled with ordinary pleasures (so that no more can be added) and not destabilized (so that its contents spill and must be replenished).

A vessel which is full of liquid and from which air (pain) and instability (turmoil) have been removed cannot be increased in fullness. Yes, such a vessel can be described as aponic and ataraxic, but it must never be forgotten that the key characteristic of such a vessel is that it is full of liquid in order to be in such a state in the first place.

Discussion of “absence of pain” and “absence of turmoil” without reference to the vessel being first full of pleasure rips all meaning from the analogy and buries the original point (the goal of life is pleasurable living) in obscurity.

Much more on this topic can be found here. 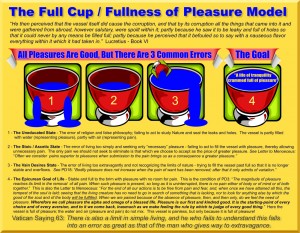 Previous ArticleA Comparison Chart on “The Goal of Life”
Next ArticleHappy Twentieth of June! – Born To Seek Pleasure And To Overcome Pain