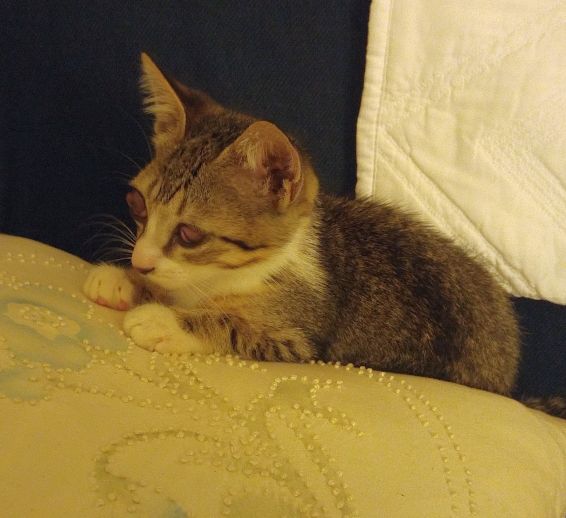 On this Twentieth of June I want to introduce you to the newest member of the Cassius family, pictured nearby.  He (as yet unnamed) brings with him the unusual feature that he is blind.  We found him three weeks ago among the mostly-feral barn cats that run near where we live, with his eyes already in terrible shape.  When we took him to the vet we were told that he might well not live, and he certainly wouldn’t live if we returned him to live outside.  We also knew that with his blindness he’d be next to impossible to adopt out, but we made the decision to nurse him back to health and let the future take care of itself.

I expect to learn a lot from the new addition.  It is amazing to see how well he gets around, and it is certain that he seems to enjoy life as much as any other cat. The vet thinks he was probably blind from birth, but nevertheless he pursues pleasure and avoids pain just like any other cat.  In fact, in almost every way he acts much as any other cat would act, even without the benefit of having watched his mother or his siblings.   That reminds me of “instincts” as described here at wikipedia:

Instinct or innate behavior is the inherent inclination of a living organism towards a particular complex behavior. The simplest example of an instinctive behavior is a fixed action pattern (FAP), in which a very short to medium length sequence of actions, without variation, are carried out in response to a clearly defined stimulus. Any behavior is instinctive if it is performed without being based upon prior experience (that is, in the absence of learning), and is therefore an expression of innate biological factors. Sea turtles, newly hatched on a beach, will automatically move toward the ocean. A kangaroo climbs into its mother’s pouch upon being born. Honeybees communicate by dancing in the direction of a food source without formal instruction. Other examples include animal fighting, animal courtship behavior, internal escape functions, and the building of nests.

And that of course leads to a discussion of Epicurean “preconceptions.”  On this topic I regularly think about whether Norman Dewitt is correct to consider this faculty to be a human form of an instinctive faculty.  The majority of commentators take the opposite position.  They argue that preconceptions are the result of conceptual reasoning, and they often prejudge the issue with their translations.  Here, for example, is the translation of a key section of Diogenes Laertius by Cyril Bailey, which employs the English word “concept” rather than “preconception” or “anticipation:”

The concept they speak of as an apprehension or right opinion or thought or general idea stored within the mind, that is to say a recollection of what has often been presented from without, as for instance ‘Such and such a thing is a man,’ for the moment the word ‘man’ is spoken, immediately by means of the concept his form too is thought of, as the senses give us the information.  Therefore the first signification of every name is immediate and clear evidence.  And we could not look for the object of our search, unless we have first known it.  For instance, we ask, ‘Is that standing yonder a horse or a cow?’ To do this we must know by means of a concept the shape of horse and of cow.  Otherwise we could not have named them, unless we previously knew their appearance by means of a concept.  So the concepts are clear and immediate evidence.  Further, the decision of opinion depends on some previous clear and immediate evidence, to which we refer when we express it:  for instance, ‘How do we know whether this is a man?’

I don’t think it’s unfair to Bailey to summarize his version as follows:  A preconception is a concept, and a concept is what we form after reasoning about what we have seen and experienced.  As we grow up we see numerous horses, and we file away their shapes and characteristics in our minds and call the result a word named “horse.”  Thus we give the word “horse” a clear definition, and this definition becomes clear and immediate evidence for our future reference.

Is that what Epicurus meant by the Greek word that most translators render as preconception or anticipation?  Did Epicurus mean that we create our own standard of truth by defining words based on what we reason for ourselves to be the important characteristics? And this result of the reasoning process is as canonically correct as anything we are told by our faculties of seeing and hearing, or feeling pain and pleasure?  If the issue is so neat and tidy as Bailey suggests, why did Epicurus not simply use a word that would have been more recognizable as “concept,” or “idea” or “conclusion after reasoning,” rather than a word that appears to focus on the “pre-” aspect of the observation?

As I watch our new cat, and observe its instinctive behaviors even under adverse circumstances of loss of sight, I think about how Epicurus himself learned from the example of newborn animals.  If pleasure and pain as  guides to life are inborn and precede experience, and if the operation of the five senses is inborn and precede experience, can the Bailey and others really be correct that preconceptions acquire their canonical status only after birth and after experience?    I don’t think so.  Yes the conceptual process of reasoning is powerful, and in this case I am continuing to study the issue and will draw the most accurate conclusion I can.  But does any conclusion of my mind, reached after reasoning and deliberation, have the immediate force of a sensation which comes from a faculty that is inborn and precedes experience, like seeing and hearing or feeling pain and pleasure?  It seems to me that the two processes are very different – both exist and are important, but it is at the inborn level, preceding experience, that I believe Epicurus was focusing our attention.  I believer our new cat is going to lead me even more firmly into the DeWitt camp on this issue! 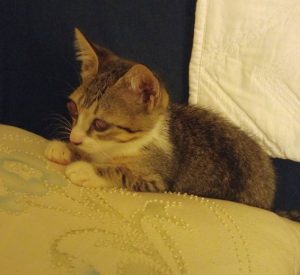 Previous ArticleHow Do We Meet Seneca’s Stoic Argument: “The ability to increase is proof that a thing is still imperfect.”
Next ArticlePeace and Safety For Your Twentieth of July – “Conceiving The Good”