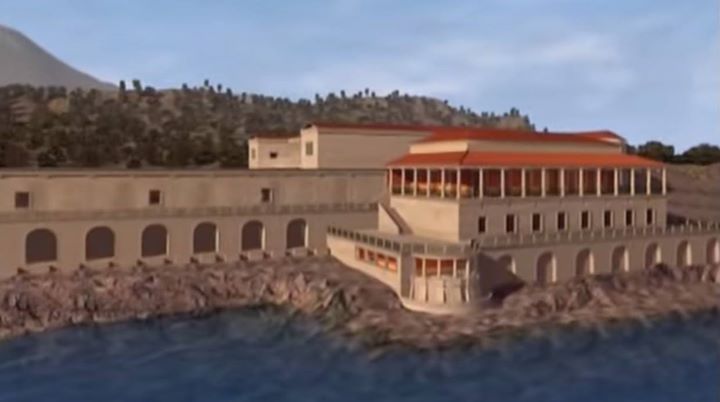 Wikipedia informs us that the tetrapharmakon comes down to us from a parchment found in the papyri of Herculaneum that it is attributed to Philodemus.  Wikipedia also informs us of the following translation, which apparently comes from D.S. Hutchinson:

Don’t fear god,
Don’t worry about death;
What is good is easy to get, and
What is terrible is easy to endure.

What is missing from the record is any explanation or context in the papyri itself, so we cannot know what Philodemus intended to convey through or about these lines. What I will argue here, in brief, is that taken as they are today as a summary of key Epicurean doctrine, they are *absysmally* bad.

(1) “Don’t fear god” is a woefully incomplete summary of PD1, which reads in full: “1. A blessed and indestructible being has no trouble himself and brings no trouble upon any other being; so he is free from anger and partiality, for all such things imply weakness.” Far from simply not “fearing” the gods, PD1 tells us that we are equally not to look to them for reward (“partiality”) or any intervention from them whatsoever. To say simply that we should not “fear” gods is to omit the key foundation of Epicurean theology – that perfect beings bring no interference **of any kind** to lesser beings. Gods do not create universes; gods do not destroy universes; and gods ask nothing of us and offer nothing to us whatsoever – certainly not a heaven or any reward whatsoever for our actions. “Fear” is only a small component of this key insight.

(2) “Don’t worry about death.” Don’t *worry* about death? Epicurus stressed the importance of making the most of the present life, because he knew that there was no other. Quite the opposite of not thinking about the issue of death, Epicurus stressed the importance of spending time wisely, enjoying life to the fullest extent possible, and thinking about death explicitly as a way of savoring the present and preparing for the future.  Seneca recorded “Wait for me but a moment, and I will pay you from my own account. Meanwhile, Epicurus will oblige me with these words: “Think on death…”  And so what Epicurus emphasized was neither a “devil-may-care” attitude nor an attitude of benign neglect, but instead that we regularly remind ourselves that the shortness of life is in large point what makes life worth living: the fact that we only go around once and get no other chances encourages us to savor the time we do have. So thoughtful examination – the very reverse of the point superficially made in the tetrapharmakon, is what we are to derive from the facts clearly stated in PD2: “Death is nothing to us; for that which has been dissolved into its elements experiences no sensations, and that which has no sensation is nothing to us.”

(3) “What is good is easy to get” is a superficial cliche that has turned more people off to Epicurean philosophy than any other (except for the next cliche in the tetrapharmakon, which follows immediately). Everyone knows how much effort is required to live happily, and how the slightest slip can lead to disaster. And when “everyone” knows something, that means Epicurus knew it too. And so when we check the text we find this clumsy cliche bears no resemblance whatsoever to the full text of PD3: “3. The magnitude of pleasure reaches its limit in the removal of all pain. When such pleasure is present, so long as it is uninterrupted, there is no pain either of body or of mind or of both together.” Legions of stoics jump to the opportunity to argue that Epicurus held that “removal of all pain,” and nothing more, is the complete definition of the good life. The trouble is that this interpretation ignores the philosophical background of why “limits” were held to be important. As Seneca recorded in discussing Epicurus, “Natural desires are limited; but those which spring from false opinion can have no stopping point. The false has no limits.” Epicurus knew this was a carryover from Plato (see Philebus), and that those who argued against pleasure held that pleasure could not be the guide of life because it had no limits, and thus could never be satisfied. With this context in mind the meaning of PD3 is clear – Pleasure DOES have a limit, and it is reached when we succeed in filling our lives so full of pleasure that no room is left for pain of any kind. Cicero expressed this Epicurean doctrine concisely, “nothing [is] preferable to a life of tranquility crammed full of pleasures.” PD3 has nothing to do with “good” being “easy to get.” Stripped of its Stoic misinterpretations, PD3 can be seen to be of the same level of profundity as the discussion of gods and death: it is a statement that PLEASURE is the guide of life, and that this guide of life can be achieved by those who follow pleasure intelligently.

(4) “What’s terrible is easy to endure” is even more outrageously false than the third line of the tetrapharmakon, and no amount of dancing around the point is enough to convince an honest student that a man to whom such a doctrine was attributed could be wise. Epicurean texts are full of appreciation for the difficulties and pains of life, and for the tragedy of those “hearts in darkness” who live in fear and doubt. Yet some would have us believe that the same Lucretius, who was compassionate enough toward animals to describe at length described the pain felt by a cow on loss of her calf, would advocate a philosophy where the pains of human life are held to be “easy” to endure. Once again the fault is in the summary, and in its interpretation, and not in the doctrine of Epicurus.  Doctrine four reads: “PD4. Continuous bodily pain does not last long; instead, pain, if extreme, is present a very short time, and even that degree of pain which slightly exceeds bodily pleasure does not last for many days at once. Diseases of long duration allow an excess of bodily pleasure over pain.” This statement has little or nothing to do with “what’s terrible is easy to endure,” and for good reason. The numbering of the Principle Doctrines was not introduced by the ancient Epicureans, and there has never been any reason to separate the intent of PD3 from PD4. Taken together, these two doctrines fit hand in glove to establish not only that Pleasure DOES have a limit (the essential structure necessary to defeat the Platonic anti-Pleasure argument), but also that Pain is not to be considered as something to be avoided at all costs. How many times today do we see fans of Epicurus act as if “avoidance of pain” is far more important than pursuing pleasure? If Epicurus had in fact taught such a doctrine, he would have emphasized the severity of pain and the overriding necessity of avoiding it. But Epicurus knew what tricks the ascetic other-worlders were up to – he had the texts of Plato himself from which to learn.  Thus Epicurus elevated to nearly the top in importance the observation that pain is NOT to be dreaded, and NOT to be allowed to cause us to shrink back from pursuing pleasure. The meaning of PD4 is not that pain is easy to endure, but that pain is WORTH enduring compared to the reward of Pleasure.

Perhaps one day more context will be readable from the papyri and we will know what Philodemus was thinking when he included these lines in his text. In the meantime, we know far too much about Philodemus to think that intended the Tetrapharmakon to be interpreted as it is today.  The current text and interpretation does more harm than good, and creates more confusion than light, and as such would have been an abomination to Epicurus, the man who wrote “In the first place, Herodotus, you must understand what it is that words denote, in order that by reference to this we may be in a position to test opinions, inquiries, or problems, so that our proofs may not run on untested ad infinitum, nor the terms we use be empty of meaning. For the primary signification of every term employed must be clearly seen, and ought to need no proving; this being necessary, if we are to have something to which the point at issue or the problem or the opinion before us can be referred.“