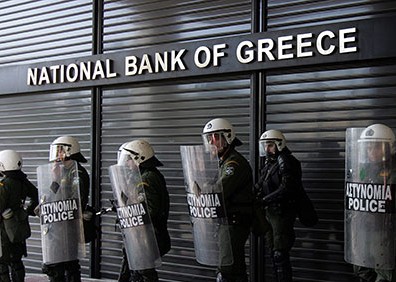 At present the Greeks are focused on the actions of three institutions that are referred to as the “troika” – the European Commission (EC), the European Central Bank (ECB) and the International Monetary Fund (IMF).  For further info on these, check here.

(1)  The religious viewpoint that “god” is sovereign and that “all things work together for good for those who love god.”  Romans 8:28   This attitude counsels “acceptance” and leads people to accept whatever happens with resignation, out of the belief that whatever happened had to happen because it is god’s will.  This attitude is closely related to belief in “fate” and in various forms of determinism, and it is worse in some religions than in others.  But whatever the religious basis, this idea of the sovereignty of god was born at the same time the idea of a single god commanding the universe was born, and it will not pass away until the universe is seen to operate according to Nature.  The natural universe which operates according to the real principles embodied in the elementary particles was most famously explained by Epicurus, and only this insight can eventually bring freedom from the tyranny of the “supernatural.”

(2)  The philosophical viewpoint that “virtue” is the end of life, and that happiness means living “virtuously.”  This attitude also counsels “acceptance” as the go-to response to every problem.  Call it Stoicism, call it Platonism, call it Aristotelianism, or call it by any other name that declares virtue or another such ambiguous word as the goal of life. Regardless of the name, the purpose of any philosophy that extols “virtue” is to attack “pleasure,” and to put in the place of pleasure some substitute guide to life erected by “logic” or “reason” or transcendentalism.  Abstractions such as these are held to be more important than pleasure or pain, and in fact the suppression of these feelings – especially pleasure – is generally preached as well. Any method of abstraction at all will do the trick, so long as it intimidates the individual into thinking that he or she was born with some purpose to fulfill higher than his or her own happiness.  Even defining pleasure as “absence of pain” will accomplish the same goal, if one does not understand the true teachings of Epicurus:  “For I at least do not even know what I should conceive the good to be, if I eliminate the pleasures of taste, and eliminate the pleasures of sex, and eliminate the pleasures of listening, and eliminate the pleasant motions caused in our vision by a visible form.”  (For the background of this and similar quotes click here.)

(3) The false social ideal that abstractions such as the “group” have interests which are more important than the happiness of each individual.  From this point of view, the larger the abstraction, or the more powerful the group, the more important are held to be its interests.  This can be illustrated in many ways, but the present illustration is the call to “internationalism” or “European solidarity.” This is the meaning of the call by the Troika to enforce asceticism and austerity in Greece, supposedly for the goal of supporting the interests of other Europeans.  Years ago, this technique was made explicit in the wording of the theme song of ascendant communism – the “Internationale“ .  The naming of this song betrays that internationalism (rather than simple communism as a theory) was the technique by which national and local and family interests were to be obliterated.  “The Internationale unites the human race.”  Later versions of the song made this more explicit:  “The International Union shall be the human race. ”  But are the interests of Greeks the same as those of Italians or Germans or Spaniards or the Irish?  Individuals have individual interests, and their true friends extend only in a limited circle of people who know them – a circle that certainly does not extend internationally or to powerful international institutions.   In the case of Greece, are the people of Greece really at odds with the people of the other countries of Europe? Or is this a crisis that has been manufactured by the international institutions which pursue power and influence over ever-widening spheres regardless of whether those spheres are composed of friends or enemies?

By citing the Internationale I do not mean to focus on the communists as the only perpetrators of abstractions over real people.  The current political Troika is more properly seen as an arm of International Corporatism.  Article after article (more below) is being written today to point out that the current Greek debt crisis did not arise purely by the actions of individual Greeks, but by the workings of private banks to profit from loans which the creditors knew could not and be repaid by the people to whom the money was lent. Those same banks then manipulated the banking systems of entire countries to convert what was formerly their own private exposure into group sovereign exposure.  These powerful international interests thus kept their profits but transferred their costs and risk of loss to entire nations who gained little or nothing from the game.   Epicurus taught that “freedom is the greatest fruit of self-sufficiency” (VS77) and that “the study of nature does not create men who are fond of boasting and chattering or who show off the culture that impresses the many, but rather men who are strong and self-sufficient, and who take pride in their own personal qualities not in those that depend on external circumstances.” (VS45)  In each case the benefit of freedom and self-sufficiency and personal strength is not “virtue” in and of itself, but the pleasurable living that comes from employing particular procedures in particular situations.  As the ancient Epicureans shouted to the world, the goal must always be pleasure, never a procedure.  Whenever you hear a procedure being extolled you are hearing an enemy of Epicurus.   Diogenes of Oinoands said it this way:  “I shall discuss folly shortly, the virtues and pleasure now. If, gentlemen, the point at issue between these people and us involved inquiry into ‘what is the means of happiness?’ and they wanted to say ‘the virtues’ (which would actually be true), it would be unnecessary to take any other step than to agree with them about this, without more ado. But since, as I say, the issue is not ‘what is the means of happiness?’ but ‘what is happiness and what is the ultimate goal of our nature?’, I say both now and always, shouting out loudly to all Greeks and non-Greeks, that pleasure is the end of the best mode of life, while the virtues, which are inopportunely messed about by these people (being transferred from the place of the means to that of the end), are in no way an end, but the means to the end. Let us therefore now state that this is true, making it our starting-point.”

The calls to asceticism we hear today ring not with the happiness of the Greek people as their goal, but with the planted axioms that all that happens is caused by god and should be accepted as good, and that the goal of life is to live virtuously, not happily.  These false ideas do not exist on their own, however.  These false ideas emanate from people who promote them for their own interests.  The Troika that threatens the world, just like it threatens Greece, does not rely primarily on guns and armies.  The Real Troika relies on false ideas promoted through false religion, false philosophy and false social ideals.  The philosophy which holds the antidote rose today rose in the ancient would because it was a true antidote, and not just a variant of Stoicism, as many today would have you believe.  That’s why the ancient Stoics, as well as the rest of the religious and philosophic establishment, have always sought to destroy it, and why modern Stoics seek to redefine it.  That philosophy is the philosophy of Epicurus.

Zero Hedge –  The Biggest Winner From the Greek Tragedy

Forbes:  Five Reasons Why The Greeks Were Right

Brisbane Times:  William Hague – Why I Was Right To Oppose the Euro From the Start