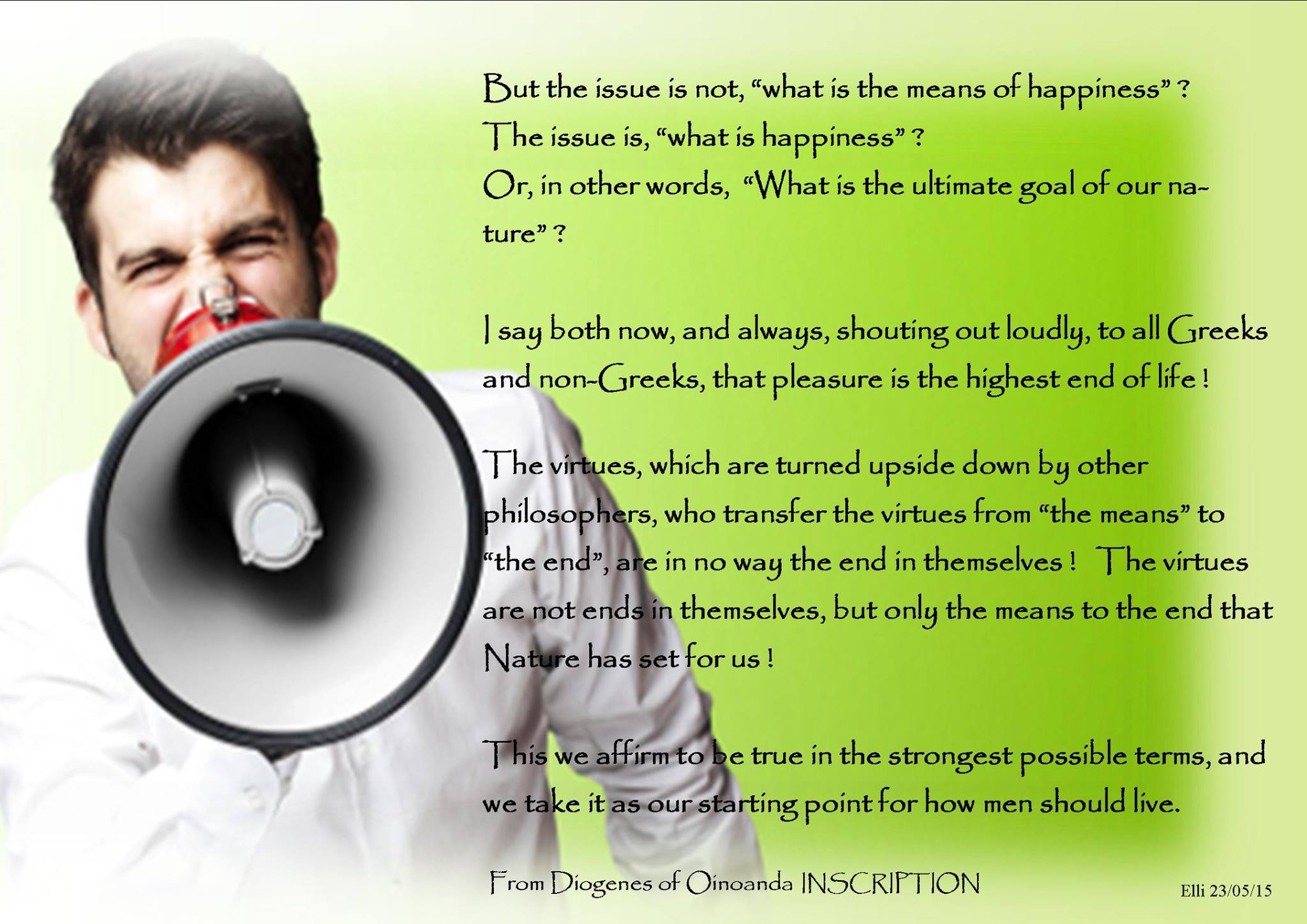 Here is a pattern I am seeing over and over: Some people just cannot or will not admit that “why” must come before “how” in deciding how to live one’s life. In any field of science or other human endeavor, it would be foolish to discuss “how” to reach a goal unless one first identified what the goal is. Why some people think that they can focus on “how” to live before being clear about the “goal” of their living is really a very interesting phenomena.

This point is the focus that was not only addressed at length by both Torquatus in Cicero’s On Ends, but also by Diogenese of Oinoanda in his passage about shouting to all Greeks and non-Greeks that the end of the best form of life is pleasure. In each case, the error being committed is to confuse “the means” of life with “the end” of life, and attempting to substitute the “means” in place of “the end.”

Why is that such a common issue? Answers could fill a book, but for the present, it’s simply important to observe the phenomena. Whether the person adopts some other philosophy of life entirely, or simply likes to use words that have no clear meaning, it seems that some people cannot avoid being seduced by the temptation of thinking that their particular pet “means” is the guaranteed way to achieve some self-evidently true goal. But there IS no self-evidently true goal in life, except the pursuit of pleasure, because it is pleasure alone that is intrinsically good. Whenever ANY “means,” no matter how high-sounding, is substituted for the goal that NATURE has set, the end result is going to be the setting up of that chosen “means” as the purpose of life, when it is manifestly not so.

Over and over again we have seen it in discussions of Epicurus, and over and over again in the future we WILL see it such discussions. We can – and we should – kindly, compassionately, and at length explain this issue in great detail. But in the end, not everyone is going to agree with us on this core issue. As for those of us who have chosen to follow the guidance of Epicurus, we seek to live happy lives above all. What is one implication of that? It is that no “means” – not even the means of compassion, of kindness, and of tolerance for those who simply *refuse* to “get it,” or *cannot* get it, can be allowed to supercede the overall goal of living happily. Sad as it might be to observe, the world has never fully embraced Epicurus, and it very likely will not fully embrace Epicurus, at least in our lifetimes. That means we have to act in our own interest, under the principle set out in PD39, to make sure that our happy living is not compromised unnecessarily by those who are not friends of Epicurean philosophy.

And a corollary point to keep in mind with this same subject is that the virtue/anesthesia worshippers want you to think that “pleasure” is defined as, and limited to, sex, drugs, and rock-n-roll. That is the furthest thing from the truth. It is entirely dependent on your own personal context whether sex, drugs, and rock-n-roll are pleasurable to you or not. The point is that Nature has given you a faculty with which you are to work intelligently, and “intelligently” does not mean overthrowing, suppressing, and demeaning the faculty. It means using it and following it wisely to maximize pleasurable living with as little accompanying pain as possible. Every one of these attempts to substitute a means for the end does the same thing – it attempts to “reason” its way to some other goal other than the one Nature gave us.

“Diogenes of Oinoanda: If, gentlemen, the point at issue between these people and us involved inquiry into «what is the means of happiness?» and they wanted to say «the virtues» (which would actually be true), it would be unnecessary to take any other step than to agree with them about this, without more ado. But since, as I say, the issue is not «what is the means of happiness?» but «what is happiness and what is the ultimate goal of our nature?», I say both now and always, shouting out loudly to all Greeks and non-Greeks, that pleasure is the end of the best mode of life, while the virtues, which are inopportunely messed about by these people (being transferred from the place of the means to that of the end), are in no way an end, but the means to the end. Let us therefore now state that this is true, making it our starting-point.”

PD39: “The man who best knows how to meet external threats makes into one family all the creatures he can; and those he can not, he at any rate does not treat as aliens; and where he finds even this impossible, he avoids all dealings, and, so far as is advantageous, excludes them from his life.”