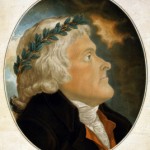 In his letter to William Short, Thomas Jefferson left us a useful outline of major points of Epicurean doctrine.  I have long admired that list, and now that recent studies have reinforced in my mind that a proper understanding of Epicureanism demands an understanding of the way critical words are defined, it’s time to turn to an exercise of developing an “Epicurean Dictionary” of Key terms.  We have some  good examples to start with in the ancient texts, and we have Epicurus stating in the letter to Herodotus:

“In the first place, Herodotus, you must understand what it is that words denote, in order that by reference to this we may be in a position to test opinions, inquiries, or problems, so that our proofs may not run on untested ad infinitum, nor the terms we use be empty of meaning. For the primary signification of every term employed must be clearly seen, and ought to need no proving; this being necessary, if we are to have something to which the point at issue or the problem or the opinion before us can be referred.  Next, we must by all means stick to our sensations, that is, simply to the present impressions whether of the mind or of any criterion whatever, and similarly to our actual feelings, in order that we may have the means of determining that which needs confirmation and that which is obscure.

It is my view that ideas similar to those held by Epicurus are well developed by Jackson Barwis, and what follows is a passage from his “Fourth Dialogue on Liberty” that I think is particularly on point.   It seems to me that this is a perceptive development of a point made by Epicurus, explained and applied in regard to use of words such as “sovereignty” and “will of the people”:

For moral and political words, continued he, are so indefinitely used that men do not easily understand each other.  Hence that eternal writing and reasoning on the same subjects:  and hence too false eloquence derives her authority, and rules with magic force the illiterate and gaping multitude.  But in the search for truth, her falsities must be detected and exposed, and her florid and delusive vanities must be thrown aside, not merely as worthless, but as destructive to the native simplicity of truth.

Amidst the fanciful and endless imaginations of the mind, unsubdued and uncorrected by a pure affection for nature, and for truth; every moral and political word has a thousand shades of meaning, and admits of innumerable combinations; which, under the direction of a vain and disingenuous wit, throws a perpetual and almost impenetrable obscurity around the plainest and most undeniable truths.

Certainly, said I; but proceed.

There can be no just reasoning, continued he, where this variegated verbosity prevails.  If we desire to obtain any real knowledge, our ideas must be founded on some real existences in nature; our words must be accurately defined, and all epithets, similes, allusions, and figurative expressions of every kind must be read with a very jealous eye:  if it were not that most readers like amusement much better than knowledge, words could not pass so currently and with so little attention to their relative signification.

A few words which have been employed by the several competitors in the present great controversy concerning Liberty, from the want of being accurately defined or from being totally incapable of definition, on account of their representing no ideas derived from any existence in nature have been the causes of much error and falsehood, and most certainly tend to much practical mischief.

I am all attention, said I.

The word Sovereignty, continued he, as used by a late French writer to signify the supreme power, or will of a whole nation collectively, and as perceived, felt, and understood by a whole nation, as if it had but one mind, has doubtless not the least foundation in nature, and is a most ridiculous and fanatical imagination.

To endeavor to prove its falsity any otherwise than by desiring any cool-headed man of common sense to consider only the many thousands of men that must have fallen under his own observation, who never had the least thought, or idea, of this imaginary sovereignty, were only to waste his time, and exercise his mind on a mere metaphysical non-entity.

It seems so indeed, but I will not interrupt you at present, said I.

Several English writers and talkers use the word, the People, in the same, or very nearly the same sense; as if there really did exist a sort of mental union, and a superiority in the people, to whose wisdom, and knowledge of human interests, the best and the greatest men that ever assisted in the government of nations, ought to think  themselves so much inferior, as always to submit not only to the wisdom, but to the will of the people.

The words, the People, when thus employed, convey no idea derived from any thing really existent in nature.  For the minds of millions of men of various capacities, from the lowest degree of understanding to the highest, never can be so concentered, nor their thoughts so nearly identical, as to form united, correct, and perfect ideas concerning the general interests and happiness of nations.

Those who entertain such wild and extravagant notions must be regardless of facts unchangeable in human nature, and of every moment’s experience; and the contradictory evidence of the histories of all nations and ages.  Where have we read, or where do we now find, any confirmation of any such notions founded on facts?

Our daily and continual experience cannot but impress our minds with a conviction of the real inability of the generality of men to undertake and execute, with propriety and energy, with judgment and success, the great moral and political interests of nations and of mankind.

Is not a great capacity in the sciences, and in the arts, considered as extraordinary and above the reach of common men?  And is not true genius, exerted in beautiful and laudable pursuits, so rare as to be the subject of continual admiration and praise of all those who are capable of feeling the full force of its powerful influence?  And how few are they who are so capable!

If these things be true, and if great abilities be so uncommon, and true genius so rare, and yet so necessary in the comprehension and successful conduct of the greatest of human affairs; how can it be reconciled with any degree of common sense to contend that the whole body of the people collectively, in any nation, are more capable of judging and acting for the interest and felicity of the whole nation than those among them of the most distinguished understanding and integrity?  But, as we have shown before, the notion of such a collected wisdom in nations, or of a collection of the minds of a whole people, politically capable of thought, or of unity of mind, or of rational consent in action, is a total impossibility in our nature, as it has been formed by infinite wisdom.

Therefore the words Sovereignty, and the People, when thus employed, are contradictory to nature, and clearly defective in point of truth; and can have but a merely imaginary signification.

Yet they have been so employed by men whose abilities will not be disputed, and to the most mischievous and cruel purposes; and we cannot but lament (what would be ridiculous, if it were not for the fatal consequences) that they have suffered their enthusiastic zeal to run so high as, like the combatants in religious controversies, to carry them out of all sight of truth or possibility; and have exhibited to the world that raging fanaticism among philosophers and politicians will shortly, perhaps, be no less common that it has been formerly among divines.  But, it should seem, Heaven has so ordained it that men must always be fanatical about something.

Well, said I; but what is the conclusion you mean to draw from all this?

I mean, answered he, to show that these words not only represent no ideas derivable from any facts in nature, but that what notions their authors intend them to represent are false and impossible:  and we must conclude also that all reasonings and conclusions founded on them, so intended to be understood, must be false; and must have a pernicious tendency in the search of political truth; and prove ultimately destructive of that true Liberty which, it is hoped, they were intended to establish.

Returning now to the task at hand, here is the list of words, properly understood in an Epicurean context, that Thomas Jefferson left us in the letter to William Short:

I intend to devote a page here to the “Jeffersonian Dictionary of Epicurean Terms”, named in his honor, but going beyond Jefferson’s  list to cover as many important terms as possible.  Suggestions for terms to be included, and potential definitions, would be appreciated.

Previous ArticleWhat Is Happy Living?
Next ArticleRecent Thoughts On Anticipations, The Canon, and Reason