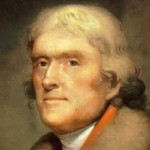 Thanks to some excellent suggestions from a reader in Poland (three cheers for Kosciouzko!)  I have taken the initiative to reorganize my Thomas Jefferson page.

In doing so, I came across this quotation which I will incorporate in my discussions of “Anticipations,” and add to the Jackson Barwis material which makes the same point.   This appears to me to be a clear statement of the nature of Anticipations, as elaborated on by DeWitt in Epicurus and His Philosophy.  If readers are aware of similar quotes to add here regarding “the moral sense,” please let me know!  In the meantime, for your reading pleasure, a fascinating paragraph which I entitle with some poetic license, “Thomas Jefferson on Anticipations.”

He who made us would have been a pitiful bungler if he had made the rules of our moral conduct a matter of science. For one man of science, there are thousands who are not. What would have become of them? Man was destined for society. His morality, therefore, was to be formed to this object. He was endowed with a sense of right and wrong merely relative to this.  This sense is as much a part of his nature, as the sense of hearing, seeing, feeling; it is the true foundation of morality and not the to kalon [beautiful], truth, &c., as fanciful writers have imagined. The moral sense, or conscience, is as much a part of man as his leg or arm. It is given to all human beings in a stronger or weaker degree, as force of members is given them in a greater or less degree. It may be strengthened by exercise, as may any particular limb of the body. This sense is submitted indeed in some degree to the guidance of reason; but it is a small stock which is required for this: even a less one than what we call Common sense.  State a moral case to a ploughman and a professor.  The former will decide it as well, and often better than the latter, because he has not been led astray by artificial rules.  In this branch, therefore, read good books, because they will encourage, as well as direct your feelings.  The writings of Sterne, particularly, form the best course of morality that ever was written.  Besides these, read the books mentioned in the enclosed paper; and, above all things, lose no occasion of exercising your dispositions to be grateful, to be generous, to be charitable, to be humane, to be true, just, firm, orderly, courageous, &c. Consider every act of this kind, as an exercise which will strengthen your moral faculties & increase your worth.
—Thomas Jefferson to Peter Carr, 1787. ME 6:257, Papers 12:15

Note:  In the “to kalon” reference, Jefferson is apparently disagreeing with Aristotle.  I need further references to link here, but here’s one (see end of article).

And for comparison purposes:

When we are told that benevolence is pleasing; that malevolence is painful; we are not convinced of these truths by reasoning, nor by forming them into propositions: but by an appeal to the innate internal affections of our souls: and if on such an appeal, we could not feel within the sentiment of benevolence, and the peculiar pleasure attending it; and that of malevolence and its concomitant pain, not all the reasoning in the world could ever make us sensible of them, or enable us to understand their nature.
…
But the truth or falsehood of moral propositions must be judged of by another measure; through a more interesting medium:  we must apply to our internal sense; our divine monitor and guide within; through which the just and unjust, the right and wrong, the moral beauty and deformity of human minds, and of human actions, can only be perceived.  And this internal sense must most undoubtedly be innate, as we have already shown; it could not otherwise have existence in us; we not being able, by reasoning, or by any other means, to give ourselves any new sense, or to create, in our nature, any principle at all.

Now whoever reflects on the rashness and absurdity of [false ideas about the gods] must inevitably entertain the highest respect and veneration for Epicurus, and perhaps even rank him in the number of those beings who are the subject of this dispute, for he alone first founded the idea of the existence of the gods on the impression which Nature herself hath made on the minds of all men.  … Epicurus calls this preconception; that is, an antecedent conception of the fact in the mind, without which nothing can be understood, inquired after, or discoursed on; the force and advantage of which reasoning we receive from that celestial volume of Epicurus concerning the Rule and Judgment of things.

– Marcus Tullius Cicero, On The Nature of the The Gods