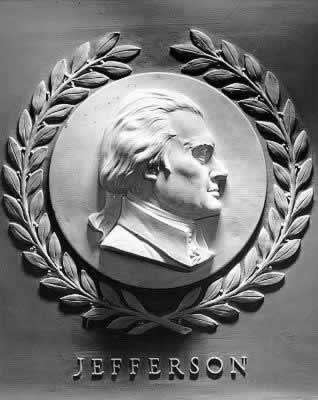 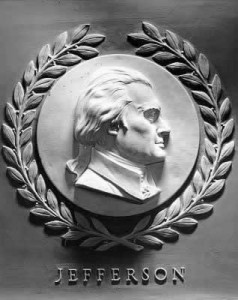 Two recent internet blogs have afforded an unusually good opportunity to “strike a blow for Epicurus.”  The two blog entries are “Epicureanism and Regret in Modern Culture” at TheAmericanConservative.com and The Importance of Marcus Tullius Cicero at TheImaginativeConservative.com.  Both blogs appear to have reasonably wide readership, and the latter article on Cicero comes from a professor at Hillsdale College, which is widely reputed among American conservatives as having the best modern scholarship of the classics.

The misinformation contained in those two blogs about Thomas Jefferson, and through him Epicurus, is profound.  The article on Cicero sees the Roman lawyer as do most academics, in his Stoic role as a reflector and transmitter of Platonism, and in that observation they are correct.  (The article makes the side point that Cicero considered himself a member of the New Academy, rather than a proper Stoic, but both were essentially Platonists and the differences are minor for our present conversation.)  What I hazard to wager, however, is that at least 90% of the readers of these articles have no clue that Cicero’s major service to mankind has been his preservation and transmission of Epicurean ideas – in the process of arguing against them!

The opportunity to strike a blow for Epicurus comes from the fact that many of the readers of these blogs also hold Thomas Jefferson in high regard.  Other than the vaguest of ideas that Jefferson was not a standard Christian, however, they know nothing of his deeper philosophic and religious writing.  Those that have any inkling of the content of his letters generally, like the Hillsdale professor, seek to lump Jefferson with Cicero as a “deist” who certainly believed in “God” as creator of the world and lawgiver for the ages.  And thus generation after generation is miseducated, and has concealed from them, Jefferson’s true philosophical brilliance.

But of course this is far from the truth, as easily seen from the writings of Jefferson that are collected here and other places.   The contrast between the truth about what Jefferson believed, and the standard academic line, is amazing.  Amazing enough, in fact, that we good reason to hope that significant numbers of young people can detect the truth for themselves once they are exposed to the shock of encountering how much what they have been taught about Jefferson is false.

And exposing them to these falsehoods today comes at a particularly good time, as many of them are searching for answers to what they know in their hearts is a crisis in both conservative and liberal American views.  Those who take the time to reflect on the challenge of the rise of Islam cannot fail to see the parallel between the decline and fall of the Roman Empire after the rise of Christianity.  Those who are willing to pursue the truth can refer to the famous Chapter 15 of Gibbon’s “Decline and Fall of the Roman Empire.”  There and throughout his work, Gibbon dissects traces the  breakdown of Roman society back to the corruption of the older, more world-embracing, and in many ways, more Epicurean, values that had been popular at the time Virgil composed his Aeneid.

But back to the point of the title of this post.  Those who choose to “strike a blow for Epicurus” by joining in on-line debates are well advised to heed the advice of Epicurus himself about how to conduct themselves.  The remaining letters directly from Epicurus are limited, but combining them with the fragments of Philodemus’ “On Frank Criticism,” we can reconstruct as did Frances Wright in A Few Days In Athens the attitude and methods that Epicurus recommended.   Here again is a fine passage with Wright’s fictional reconstruction of these recommendations.   The context is a discussion of Epicurus’ advice on how to respond to those who hold opinions we consider to be vicious, and whether we should confront them with (1) indignation or (2) contempt:

“And for the ears of a third,” interrupted Leontium.  “I was fairly driven into exile.”

“What was the subject?” asked Epicurus.

“Whether the vicious were more justly objects of indignation or of contempt: Metrodorus argued for the first, and I for the latter.  Let the master decide.”

“He will give his opinion certainly; but that is not decision.”

“Neither! I had no idea the question had more than two sides.”

“It has yet a third; and I hardly ever heard a question that had not. Had I regarded the vicious with indignation, I had never gained one to virtue.  Had I viewed them with contempt, I had never sought to gain one.”

“How is it,” said Leontium, “that the scholars are so little familiar with the temper of their master?  When did Epicurus look on the vicious with other than compassion?”

“True,” said Metrodorus. “I know not how I forgot this, when perhaps it is the only point which I have, more than once, presumed to argue with him; and upon which I have persisted in retaining a different opinion.”

“Talk not of presumption, my son.  Who has not a right to think for himself?  Or, who is he whose voice is infallible, and worthy to silence those of his fellow men?  And remember, that your remaining unconvinced by my argument on one occasion, can only tend to make your conviction more flattering to me upon others.  Yet, on the point in question, were I anxious to bring you over to my opinion I know one, whose argument, better and more forcible than mine, will ere long most effectually do so.”

“No other than old hoary Time,” said the master, “who, as he leads us gently onwards in the path of life, demonstrates to us many truths that we never heard in the schools, and some that, hearing there, we found hard to receive.  Our knowledge of human life must be acquired by our passage through it; the lessons of the sage are not sufficient to impart it.  Our knowledge of men must be acquired by our own study of them; the report of others will never convince us.  When you, my son, have seen more of life, and studied more men, you will find, or, at least, I think you will find, that the judgment is not false which makes us lenient to the failings — yea! even to the crimes of our fellows.  In youth, we act on the impulse of feeling, and we feel without pausing to judge.  An action, vicious in itself, or that is so merely in our estimation, fills us with horror, and we turn from its agent without waiting to listen to the plea which his ignorance could make to our mercy.  In our ripened years, supposing our judgment to have ripened also, when all the insidious temptations that misguided him, and all the disadvantages that he has labored under, perhaps-from his birth, are apparent to us — it is then, and not till then, that our indignation at the crime is lost in our pity of the man.”

“I am the last,” said Metrodorus, a crimson blush spreading over his face, “who should object to my master his clemency towards the offending.  But there are vices, different from those he saved me from, which, if not more unworthy, are perhaps more unpardonable, because committed with less temptation; and more revolting, as springing less from thoughtless ignorance than calculating depravity.”

“Are we not prone,” said the sage, “to extenuate our foibles, even while condemning them?  And does it not flatter our self-love, to weigh our own vices against those of more erring neighbors?”

The scholar leaned forwards, and stooping his face towards the hand of his master, where it rested on the table, laid the deepening crimsons of his cheek upon it. “I mean not to exculpate the early vices of Metrodorus.  I love to consider them in all their enormity; for the more heinous the vices of his youth, the greater is the debt of gratitude his manhood has to repay to thee.  But tell me,” he added, and lifted his eyes to the benignant face of the sage, “tell me, oh, my friend and guide! was the soul of Metrodorus found base or deceitful; or has his heart proved false to gratitude and affection?”

“No, my son, no,” said Epicurus, his face beaming with goodness, and a tear glistening in his eye. “No!  Vice never choked the warm feelings of thy heart, nor clouded the fair ingenuousness of thy soul.  But, my son, a few years later — a few years later, and who shall say what might have been! Trust me, none can drink of the cup of vice with impunity.”  But you will say, that there are qualities of so mean or so horrible a nature, as to place the man that is governed by them out of the pale of communion with the virtuous.  Malice, cruelty, deceit, ingratitude — crimes such as these, should, you think, draw down upon those convicted of them, no feelings more mild than abhorrence, execration, and scorn.  And yet, perhaps, these were not always natural to the heart they now sway. Fatal impressions, vicious example, operating on the plastic frame of childhood, may have perverted all the fair gifts of nature, may have distorted the tender plant from the seedling, and crushed all the blossoms of virtue in the germ.  Say, shall we not compassionate the moral disease of our brother, and try our skill to restore him to health?  But is the evil beyond cure?  Is the mind strained into changeless deformity, and the heart corrupted in the core?  Greater, then, much greater will be our compassion.  For is not his wretchedness complete, when his errors are without hope of correction?  Oh, my sons! the wicked may work mischief to others, but they never can inflict a pang such as they endure themselves.  I am satisfied, that of all the miseries that tear the heart of man, none may compare with those it feels beneath the sway of baleful passions.”

If we keep this advice mind, it is possible to engage in internet debates in ways that both reinforce our happy living, and actually accomplish something in terms of educating others about Epicurus.  Of course it is obvious that the pleasure we get from discussing the truth is worthwhile in itself.  Further, if we gain new friends in doing so, then we pursue the course that Epicurus recommended above all as the best method of securing a happy life.  But let’s close this post by recalling the motivation of the great Lucian, who used these words to explain why he wrote Alexander the Oracle-Monger:

My object, dear friend, in making this small selection from a great mass of material has been twofold. First, I was willing to oblige a friend and comrade who is for me the pattern of wisdom, sincerity, good humor, justice, tranquility, and geniality. But secondly I was still more concerned (a preference which you may be far from resenting) to strike a blow for Epicurus, that great man whose holiness and divinity of nature were not shams, who alone had and imparted true insight into the good, and who brought deliverance to all that consorted with him.