Unfortunately at this moment I do not have time for much more than what I’ve already written in the title, but here is the gist of it. 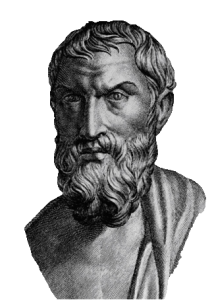 Tonight, thanks to good friends in a group discussion on Facebook, we came across the article linked here by Mathew Wenham.

Fans of Epicurus, this is an important and well-argued article.  Please read it and keep an open mind to the possibility that the “standard” interpretations of katastematic pleasure are not what they’re cracked up to be!  The full text is here.

Thank you Mr. Wenham for an article that seems to me compelling and tremendously helpful for understanding this difficult subject!!

“Absence of pain” does not, considered as standing alone as a Platonic concept, constitute pleasure. (This is a typical hazard of Platonic-Aristotelian conceptualizing – reality becomes distorted through a lens which is unclear or fails to incorporate a relevant fact.) Pleasure is better understood as a “sense” analogous to sight or hearing. Pleasure is experienced and felt, along with pain (collectively referred to as “the passions”) as part of the exercise of being conscious and alive. The refutation of Chryssipus’ argument about the hand (in the same passage of Cicero) points the way to seeing this more clearly. So long as the hand is alive and not in pain, it experiences a state of pleasure. Perhaps differently from the sense of sight, however, which feeds off a particular type of external stimulus, the sense of pleasure has no need of constant new outside stimulus. Our mind can pleasurably exercise itself with grateful and pleasant recollections even when it is receiving no outside stimulus of sight or sound. Thus Epicurean pleasure does not require the constant external stimulus of luxury. What it does require is an active and engaged mind – something that the dead, who might also be thought of as having no pain, cannot provide.

I tend to agree with Mr. Wenham also that the confusion here does not necessarily stem from malice on Cicero’s part. To be charitable to Cicero, the confusion seems more the result that inevitably follows from viewing Epicureanism through false Platonic and Aristotelian paradigms. This is an ever-present hazard for we who live in a world steeped in religious and academic anti-Epicurean dogma.

Update 04/03/15.  I have done a lot more reading, and I was too charitable to Cicero in what I wrote above.  This is a very important topic.  Readers on this issue should refer not only to this article, but also to:

1) Norman DeWitt, “Epicurus and His Philosophy,” Chapter 12, the New Hedonism (e.g.:  Even at the present day the same objection is raised. For instance, a modern Platonist, ill informed on the true intent of Epicurus, has this to say: “What, in a word, is to be said of a philosophy that begins by regarding pleasure as the only positive good and ends by emptying pleasure of all positive content?”  This ignores the fact that this was but one of the definitions of pleasure offered by Epicurus, that he recognized kinetic as well as static pleasures. It ignores also the fact that Epicurus took personal pleasure in public festivals and encouraged his disciples to attend them and that regular banquets were a part of the ritual of the sect. Neither does it take account of the fact that in the judgment of Epicurus those who feel the least need of luxury enjoy it most and that intervals of abstinence enhance the enjoyment of luxury. Thus the Platonic objector puts upon himself the necessity of denying that the moderation of the rest of the year furnishes additional zest to the enjoyment of the Christmas dinner; he has failed to become aware of the Epicurean zeal for “condensing pleasure.”)

2) Gosling & Taylor, “The Greeks on Pleasure,” Chapter 19, “Katastematic and Kinetic Pleasures” (“Plato’s and Aristotle’s intellectual feats can only win one’s admiration, but a cool look at the results enables one to understand how Epicurus might have seemed more in contact with the subject. For if we are right, Epicurus was not advocating the pursuit of some passionless state which could only be called one of pleasure in order to defend a paradox. Rather he was advocating a life where pain is excluded and we are left with familiar physical pleasures. The resultant life may be simple, but it is straightforwardly pleasant.”)

3) Boris Nikolsky, “Epicurus on Pleasure” (“The paper deals with the question of the attribution to Epicurus of the classification of pleasures into ‘kinetic’ and ‘static’. This classification, usually regarded as authentic, confronts us with a number of problems and contradictions. Besides, it is only mentioned in a few sources that are not the most reliable. Following Gosling and Taylor, I believe that the authenticity of the classification may be called in question. The analysis of the ancient evidence concerning Epicurus’ concept of pleasure is made according to the following principle: first, I consider the sources that do not mention the distinction between ‘kinetic’ and ‘static’ pleasures, and only then do I compare them with the other group of texts which comprises reports by Cicero, Diogenes Laertius and Athenaeus. From the former group of texts there emerges a concept of pleasure as a single and not twofold notion, while such terms as ‘motion’ and ‘state’ describe not two different phenomena but only two characteristics of the same phenomenon. On the other hand, the reports comprising the latter group appear to derive from one and the same doxographical tradition, and to be connected with the classification of ethical docrines put forward by the Middle Academy and known as the divisio Carneadea. In conclusion, I argue that the idea of Epicurus’ classification of pleasures is based on a misinterpretation of Epicurus’ concept in Academic doxography, which tended to contrapose it to doctrines of other schools, above all to the Cyrenaics’ views.“)