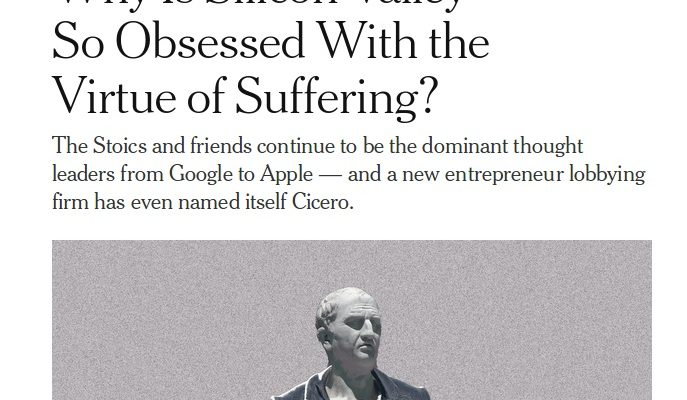 This article lays out a very concerning aspect of Silicon Valley – and a reason that Epicurean platforms should not depend on Big Tech.

(1) “An ancient Greek school of thought, Stoicism argued that the only real treasures in life were inner virtues, like self-mastery and courage. The Stoics offered tactics to endure pain and pleasure without complaint.”

Tactics to ENDURE PLEASURE WITHOUT COMPLAINT???? This writer admits more than he realizes!

At least to my quick reading he does not count Epicureans as among the “friends” of the Stoics.

(2) “Its landing page is adorned with a quote from Cicero, a Roman philosopher-statesman who embraced much of Stoicism’s ethical systems while remaining skeptical of its metaphysics: “I have always been of the opinion that unpopularity earned by doing what is right is not unpopularity at all but glory.””

(3) Wow – this guy gets a lot right – including that Stoicism is the philosophy of establishmentarian power-lust!

“But tenets of Stoicism — which can be interpreted to argue that the world and its current power structure are correctly set as they are — fit right in.”

Also: “Instead, Stoics believed that everything in the universe is already perfect and that things that seem bad or unjust are secretly good underneath. The philosophy is handy if you already believe that the rich are meant to be rich and the poor meant to be poor. The new popularity of Stoicism among the tech crowd is, in my view, strikingly similar to Stoicism’s popularity among the powerful elites of ancient Rome,” Dr. Palmer said. “As Rome took over, it surged in popularity because it was the one system of ethics that worked well for the rich and powerful.”

Also:  ​”The Cicero Institute comes at a time of tension in Silicon Valley, from a person with a complicated history there. Joe Lonsdale, who founded the institute along with his wife, Taylor, is also a founder of Palantir, the data analytics firm long mired in controversy for its work supporting surveillance and predictive policing.”​
​

(4) Yes he is right again! Frauds of a feather, flock together! “Elizabeth Holmes, the founder of the disastrous health diagnostics start-up Theranos and star of a new HBO documentary about its collapse, would often cite “Meditations,” by Marcus Aurelius.”

(5) Not the writer’s issue, but he quotes someone who get’s it wrong:

“It’s very interesting to see their sort of sad lethargy,” Dr. Palmer said. “When you’re 37, rich, retired and unhappy, it’s very perplexing.” To her, it makes sense that they then turn to Stoicism. She called Stoicism “a wonderful therapy against grief and the blinders of the rat race.”

Wrong – Stoicism is the guarantee that they will never EMERGE FROM the grief and the blinders of the rat race. And why would they? They are pursuing their goal accurately by mucking around in the grief and the maze!

(6) ““So much of Stoicism is about achieving interior tranquillity,” she said.” << And thus we see for the 900th time the danger in failing to think about what “tranqulity” really means –and that the right view is that your life is filled with pleasures, experienced without disturbance. If only these guys would in fact listen to what Cicero said about Epicureans, even if he said it in jest/derision:

Cicero, In Defense of Publius Sestius 10.23: “He {Publius Clodius} praised those most who are said to be above all others the teachers and eulogists of pleasure {the Epicureans}. … He added that these same men were quite right in saying … that nothing was preferable to a life of tranquility crammed full of pleasures.

(7) To the extent this was intended to refer to Epicurus, it is only partly correct and substantially inaccurate, so it is good that Epicurus was not named: “Other schools of thought during Stoicism’s ancient rise had warned that politics and the pursuit of wealth would lead only to stress and risk, Dr. Palmer said, and some encouraged retiring from active life and even renouncing property. But Stoicism did not.”

(8)   Maybe Cicero deserves credit for fighting Cataline, but this final quote is only partly right — ultimately when the time came for action against Caesar, it was not Cicero, or a Stoic, but an Epicurean and a Platonist who collaborated, with the Epicurean at the head at least as much as the Platonist. There is a good article by Sedley on this (“The Ethics of Brutus and Cassius”) –

“Of the institute’s mascot, Dr. Palmer said: “They’ve chosen the one who comes out of inaction when there’s a crisis to try to prevent a coup.”

Previous ArticleWhat Type of Epicurean Are You?
Next Article“We And The Stoics Today” – New Translation of An Article From The Thessaloniki Garden: