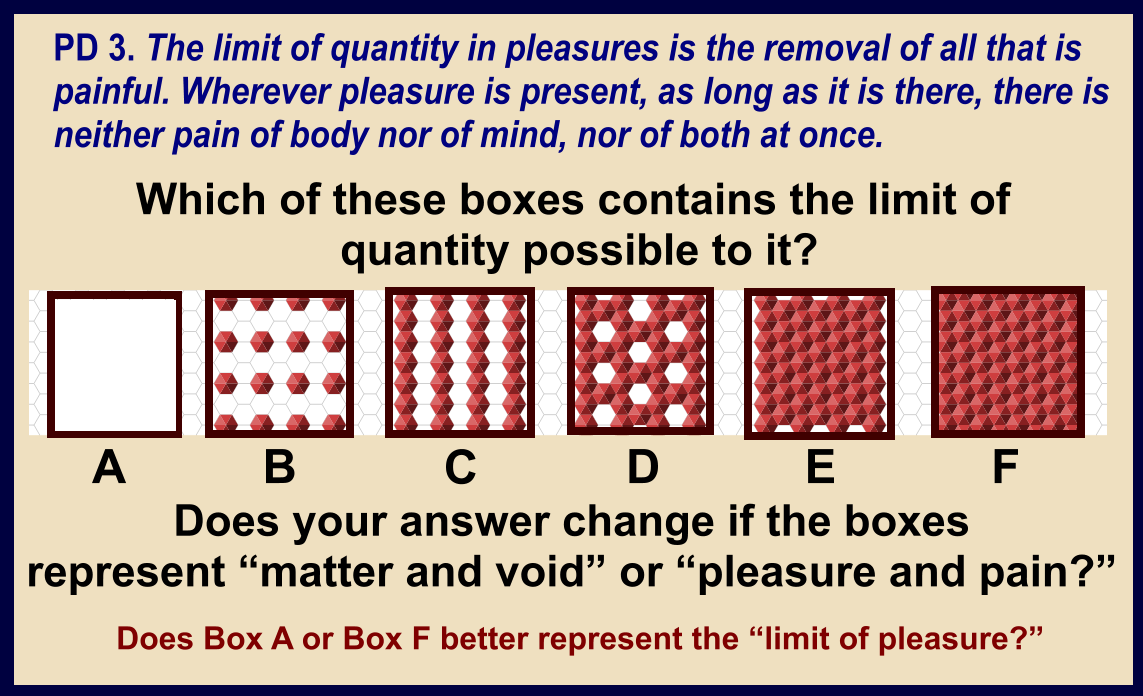 The diagram associated with this post is intended to dramatize the question:  Does any quantity of a thing ever change that thing into its opposite?

When Epicurus stated that there are only two feelings, pleasure and pain, it seems to me that he was making a direct analogy to matter and void. And when discussing matter and void, it is seems clear beyond doubt that absence of void is a *measure* of matter, not a type of matter itself.

IF no quantity of a void is ever sufficient (or small enough) to change void into matter.

THEN likewise, absence of pain is not a type of pleasure, but a measure of a quantity of pleasure (the largest quantity which any given thing is capable of containing).

To consider void – the absence of matter – as identical to matter would be the grossest violation of Epicurean physics.

To consider absence of pain to be a type of pleasure – in fact the “best” type – would be the grossest violation of Epicurean ethics.

[Note: The conscious feeling of “well being” which sometimes is suggested as a definition of “absence of pain” would almost certainly be a positive mental pleasure of the active state of thinking such as anyone can understand as a normal pleasurable emotion that goes along with living well and experiencing normal pleasures of living. As such, it’s the equivalent of one of the red hexagons in the boxes shown in the diagram. In other words, a feeling of well being is a normal feeling just like any other pleasure, not a mysterious equivalent of one of the white “empty” locations. The problem to be avoided is to define “absence of pain” as a new and apparently mysterious type of pleasure that we can evoke by eliminating all normal pleasures, as in Box A.  Box A – where all normal pleasures are absent – neither a substitute for pleasure nor the highest state of pleasure, but the equivalent of death.]

Now to repeat:
The nature of everything is dual – matter
And void; or particles and space, wherein
The former rest or move. We have our senses
To tell us matter exists. Denying this,
We cannot, searching after hidden things,
Find any base of reason whatsoever.
Next, if there is no place, or space, our so-called void,
Bodies could nowhere be, and nowhere move.
I proved this not so long ago, remember.
Also, there’s nothing else which you can call
Distinct alike from matter and from void,
Some kind of, maybe, third alternative.
No. What exists is something in itself,
Susceptible to touch, however frail,
However tiny, and capable of growth,
Of increase after its fashion. But a something
Touch cannot reach, a thing that cannot keep
Another thing from simply passing through it,
This kind of thing must be our so-called void.
Besides, if something has its own existence,
It will either act itself, or, being passive,
Will suffer other things to act upon it,
Or yield a space where things can be, or happen,
But nothing without substance has the power
to act, or to be acted on, and nothing
Can proffer space except the void and empty.
Therefore, except for void and substance, nothing,
No third alternative, no other nature
Can possibly exist in the sum of things,
Perceptible to any of our senses
Or apprehended by the reasoning mind.

The internal sensations they say are two, pleasure and pain, which occur to every living creature, and the one is akin to nature and the other alien: by means of these two choice and avoidance are determined. 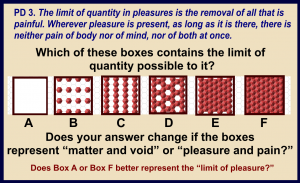