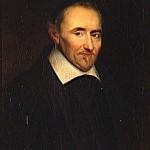 From Page 130 of the Stanley translation of Gassendi’s “De Vita & Moribus Epicuri:”

For this reason, a wise man will neither hearken to the Fables of Poets, nor will himself labor in composing fabulous poems; nay rather, he will have an aversion from the juggling tricks & sophistications of Oratours; and as he exacts no more from Grammar than congruity,  so neither will he exact more from Rhetorick than perspicuity of speech, but will use a plain familiar style; whether he profess to teach or write books, or, explicate to the multitude any thing already written, he will be wary the he do it not panegrically and hyperbolically.

But seeing that, of Philosophers, there are some who assert nothing certain of truth, but doubt all things; others, who imagine that they know all things, and assert without any distinction:  A wise man ought not to behave himself so, as that he assert not all, but only maintain some positive Maxims which are indisputable.

For when there are divers ways whereby some things may be performed, as the eclipses of the starrs, their rising, setting, and other superior things, so to approve one way as to disapprove the rest is certainly ridiculous.  But when we speak of things that cannot be any way but one (such as are these Maxims:  Of nothing is made nothing; the Universe consists of body and vacuum; The principles of things are indivisible, and the like, then it is very absurd not to adheare firmly to them.

Hence it is proper for a wise man to maintain both the manifold ways in those, and the one single way in these, and not to stagger nor recede from science once obtained; not like those, who as if prescribed by a law, Philosophize concerning Nature,  not in such a manner as the things themselves require,  but goe out of the right way and run into fables, never considering that to vent, or vainly boast about our own opinions, conduceth nothing to happy life, but disturbeth the mind.

For if those things , which we suspect and dread from the Superior bodies & even from death it selfe, breed no disturbance in us, as things unconcerning our condition; if also we could sufficiently comprehend what are the just bounds of our desires, and to what degree the grief which springs from them is so, be assuaged, there were no need of Physiology, or the explication of Nature.

But because it is not possible that we should arrive at so great a good without having first surveyed the nature of things, but, as children in the dark tremble and are afraid of every thing; so we miserably groping in the darkness of ignorance, fear things that are fabulous, and no more to be dreaded than those which children fear in the dark, and fancy to themselves will happen.  It is therefore necessary that this terror and darkness of the minde be dispelled, not by the beams of the Sun, but by impressions from Nature and Reason, that is by Physiology.  Whence also Physick is to be esteemed as part of Philosophy.

Dialectick, which some add as a third part, is to be rejected, because as ordinarily taught, it doth nothing but beget thorny questions, being an empty bubbling, and forge of cavills.  Moreover, because it is superfluous to that end which they propose, that is, to the perception and dijudication of the reasons of Naturalists;  for there needs no more thereto, then, like the natural Philosophers themselves, to use terms ordinary and perspicuous.

Note:  I am preserving the original spelling and formatting wherever possible.