In preparing my recent synopsis of the Inscription of Diogenes in Oinoanda, I was confronted with yet another, and very clear, Epicurean denunciation of the folly of believing that virtue is its own reward. Diogenes expressed the point essentially this way:

“Here is the point at issue between the other philosophers and the Epicureans. If we were both inquiring into, “what is the means of happiness?” and the other philosophers wanted to say, “the virtues,” (which would actually be true), it would not be necessary for us to take any other step than to agree with them.

I say both now, and always, shouting out loudly, to all Greeks and non-Greeks, that pleasure is the highest end of life!

The virtues, which are turned upside down by other philosophers, who transfer the virtues from “the means” to “the end”, are in no way the end in themselves! The virtues are not ends in themselves, but only the means to the end that Nature has set for us!

This we affirm to be true in the strongest possible terms, and we take it as our starting point for how men should live.

From here, let us suppose that someone asks a naive question. “Who do these virtues benefit?” “Or, for whose benefit should man live virtuously?” The obvious answer is, “man himself.” The virtues do not make provision for the birds flying past, enabling them to fly well, nor do they assist any other animal. The virtues do not desert the man in which they have been born, and in which they live. Rather, it is for the sake of the man that the virtues exist, and it is for the sake of man that the virtues exert their actions.

Similar condemnations of the idea that virtue is an end in itself are found in other surviving Epicurean texts. For example, in Cicero’s Defense of Epicurus, Torquatus states, first, in regard to his Torquati ancestors,

“What their motive was, I will consider in a moment. For the present, I will confidently assert that, if they had a motive for those undoubtedly glorious exploits, that motive was not a love of virtue solely for itself.”

Then in a more extended passage:

“Those who place the chief good in “virtue” alone are beguiled by the glamor of a name, and they do not understand the true demands of Nature. If they will but consent to listen to Epicurus, they will be delivered from the grossest error. Your school waxes eloquently on the supposedly transcendent beauty of the “virtues.” But were those virtues not productive of pleasure, who would deem them either praiseworthy or desirable?”

“As with the other virtues, Justice cannot correctly be said to be desirable in and of itself. Here again, Justice is desirable because it is so highly productive of gratification. Esteem and affection are gratifying because they render life safer and happier. Thus we hold that injustice is to be avoided, not simply on account of the disadvantages that result from being unjust, but even more, because when injustice dwells in a man’s heart, it never allows him to breathe freely, or to know a moment’s rest. Thus Epicurus shows us that the alleged glory of “Virtue,” on which the Platonic philosophers love to expound so eloquently, has, in the final analysis, no meaning at all unless it is based on living happily, because happiness is the only thing that is intrinsically attractive and desirable. It therefore cannot be doubted that pleasure is the one supreme and final good, and that a life of happiness is nothing else than a life of pleasure.

Contrast this with the position by the Stoics (and by the Platonists before them):

In the next place, it is only another aspect of the Stoic doctrine when we say that virtue is its own reward; or, to put it otherwise, that man is made to be virtuous — virtue is the function of his soul. But an organ is not paid for discharging its function : the reward lies simply in its service, says Marcus Aurelius (Med ix 42). “When you complain of some breach of faith or gratitude, take heed first and foremost to yourself. Obviously the fault lies with yourself, if you had faith that a man of that disposition would keep faith, or if in doing a kindness you did not do it upon principle, nor upon the assumption that the kind act was to be its own reward. What more do you want in return for a service done? Is it not enough to have acted up to nature, without asking wages for it? Does the eye demand a recompense for seeing, or the feet for walking? Just as this is the end for which they exist, and just as they find their reward in realizing the law of their being, so, too, man is made for kindness, and whenever he does an act of kindness or otherwise helps forward the common good, he thereby fulfills the law of his being and comes by his own.”1

But if virtue is its own reward, vice is its own severest punishment. “As Zeus has ordained, so act. But if you do not act so, you will suffer loss, you will be punished. What will be the punishment? Nothing else than not having done your duty: you will lose fidelity, modesty, decency. Do not look for greater penalties than these.” Epictetus (Diss. iii 7)

And here is a photo of the statue of the old fool himself!  Chrysippus!  Is this the very statue to which Cicero referred in the passage below, from his “Defense of Epicurus” in “On Ends”? 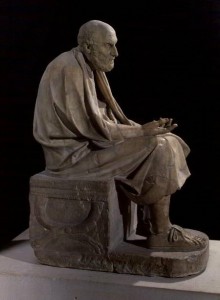 To illustrate this, my father used to tell me (when he wanted to show his wit at the expense of the Stoics) that there was once in Athens a statue of the Stoic philosopher Chrysippus. This statue was fashioned with Chrysippus holding out one hand, in a gesture intended to indicate the delight which he used to take in the following little play on words:

“Does your hand desire anything, while it is in its present condition?’

“But if pleasure were a good, it would want pleasure.”

“Therefore pleasure is not a good.”

This is an argument, my father declared, which not even a dumb statue would employ, if a statue could speak. This is because the argument is cogent enough as an objection to those who pursue sensual pleasures as the only goal of life, but it does not touch Epicurus. For if the only kind of pleasure were that which, so to speak, tickles the senses with a feeling of delight, neither the hand nor any other member of the body could be satisfied with the absence of pain, if it were not accompanied by an active sensation of pleasure. If, however, as Epicurus holds, the highest pleasure is experienced at the removal of all pain, then the man who responded to Chrysippus was wrong to be misled by his questions. This is because the man’s first answer, that his hand was in a condition that wanted nothing, was correct. But his second answer, that if pleasure were a good, his hand would want it, was not correct. This was wrong because the hand had no need to desire any additional pleasure, because the state in which it was in – a state without pain – was itself a state of pleasure.

This is a huge issue, and far too important to cover simply in a Twentieth message.  It’s a subject to return to over and over again.  If one were to try to rank the unifying themes of the Epicurean texts, it would be hard to rank anything higher than the position that “virtue” is not the end of life.

Today, the issue is not often framed in terms of “virtue,” but the issue is exactly the same!  Substitute your preferred politically correct doctrine of the day for the word virtue; choose whatever you will:  “courage,” “temperance,” “equality,” “diversity,” “socialism,” “communism,” “capitalism,” “environmentalism,” “consumerism,” “humanism,” “atheism,” — even values that some think are unchallengable, such as “freedom” — none of these values are “good in themselves.”  According to the standard that NATURE has set, these values are good, they are useful, they are productive ONLY if they happen to be, under the circumstances at hand, productive of pleasure and a life of happiness.  Contexts and circumstances change, at times as swiftly as the atoms themselves.  In the end, only the reality of Nature survives, and that is the guide to which we must always look if we wish to live happily and not be deceived.

As Diogenes of Oinoanda wrote on his wall, this is a challenging doctrine, but with the challenge comes a great reward – the reward of knowing that we are living life according to Nature, and not according to the fleeting whims of the crowd.