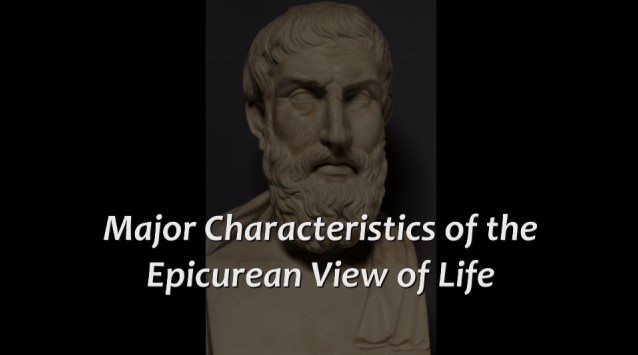 Major Characteristics of the Epicurean View of Life

1 – A Universe that operates by and contains only Natural, not supernatural, forces.

2 – A Universe with nothing divine, mystical, or imaginary outside it, but only a reality within it that is endless in extent.

3 – A Universe neither created by gods nor springing into existence at a single moment in time, but eternal, with nothing coming from or going to nothing.

4 – A Universe where the only eternal things are the ultimate particles which comprise it, with no eternal Platonic forms, Aristotelian essences, or rationalistic ideals constituting a “higher truth.”

5 – A Universe neither ordered nor chaotic, but operating on Natural principles derived from the properties of the ultimate particles and the qualities that emerge from their movements and combinations.

6 – A Universe which contains life that is neither mystical nor unique to Earth, but plentiful throughout eternal time and boundless space.

7 – A Universe in which individual consciousness exists to experience Pleasure and Pain only for a single lifetime, not before birth or after death.

8 – Knowledge that is based on observation through natural faculties, not abstract logic or rationalism.

9 – Knowledge that embraces emotions as things to be felt, not suppressed.

10 – Knowledge that holds with confidence that facts which are based on clear evidence are true, rejecting both radical skepticism and belief that is contrary to or without evidence.

11 – Ethics holding that the goal of life is Pleasure, not virtue or religious piety.

12 – Ethics holding virtue, wisdom, and friendship to be valuable tools for producing Pleasure, but not ends in themselves.

13 – Ethics in which desires are evaluated as to whether they are natural or necessary, not so as to choose only what is necessary or to reduce desires to a minimum, but so that those desires which are chosen will maximize Pleasure and minimize Pain.

14 – Ethics in which the goal of life is to fill experience with Pleasures and to reduce Pains to a minimum, not to set up paradoxical abstractions such as “detachment” or “tranquility” or “absence of pain” in the place of Pleasure as ordinarily understood.

15 – Ethics based on achieving Pleasure within a society of friends, protected and separated from enemies, with political involvement, whether of engagement or withdrawal, chosen or avoided according to its efficacy in achieving Pleasurable living.

16 – Ethics based on embracing free will as core to human existence, rejecting both determinism and wishful thinking that all things are possible.

17 – Ethics in which the decision to engage in sexual love is evaluated – as are all choices and avoidances – according to the total amount of Pleasure and Pain the choice will bring, not as an illusory ideal to be pursued under the intoxication of the moment.

18 – Ethics which does not seek for “meaning” in false religion or idealism, but in living for the goal of experiencing the most Pleasure and the least Pain that our personal circumstances will allow.

20 – Ethics in which “Pleasure” describes the highest goal for each living being, which cannot be improved upon, because Pleasure is the only faculty given by Nature through which we know what to choose, and the highest experience of Pleasure any being is capable of achieving is the complete filling of its experience with Pleasures, undiluted with any mixture of Pains.

21 – Ethics in which in Pains are sometime chosen and Pleasures are sometimes avoided, but for no other purpose than the achievement of the greater pleasure or lesser pain arising from that particular choice or avoidance.

22 – Ethics in which there is no such thing as absolute justice that applies to all people at all times at all places, only relationships which change according to circumstance so as to obtain the most pleasure and the least pain for those who are part of the agreement.

Thank you for the comments I am receiving on this list.  As I work to revise and improve it, please note the following:

1 – I am told that modern science apparently speaks of “multiverses” rather than using the traditional terms “universe” and “universal” to describe all that exists. I find it very confusing to use the term “universal” in its normal context of referring to “everything that exists” while also using “universe” to describe less than the sum of things, so in this presentation I decline to speak of “multiverses” and refer to “the Universe” as a term meaning “all that exists.”

2 –  I note several comments relate to whether Epicurus’ views comport with modern physics. For this exercise I want to primarily focus on fidelity to Epicurus’ actual views, while always stating them sympathetically to allow them to be harmonized with modern views where possible. But wherever there may appear to be something that is irreconcilable I will still state Epicurus’ view and leave arguments that he was wrong for other discussions. This will I think produce the greatest insight into Epicurus’ thinking and the way his views fit together.

Previous ArticleWhy Is the Subject of “Limits” Important?
Next ArticlePeace and Safety For Your Twentieth of May: Better Never To Have Been Born?