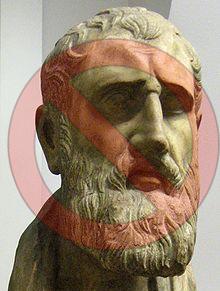 There is an unfortunate strain of thought which poses a significant danger for those who do not discern the important differences between Epicurean and Stoic theory.  Straying onto the Stoic path can easily lead to a very un-Epicurean turn toward apathy, introversion, and passivism.  In order to get to the root of the problem and seek a solution, we can refer to several sections of  Norman DeWitt’s discussion of “The New Hedonism”:

“To return now to the dualistic good, this has been seen to consist, on the one hand, of “the stable condition of well-being in the flesh.” The part that is opposed to the flesh is the intelligence. So far as this is concerned, the perfect condition is ataraxy, which is defined by the New English Dictionary as “Stoical indifference.”  This signifies a confusion with “apathy.” The Epicurean sage did not cultivate indifference. It is even said of him: “He will be more susceptible of feeling than other men nor would this be an obstacle to wisdom.”  If an example be in point, mention may be made of gratitude, of which the sect made a specialty. The general objective was not to attain immunity to feeling but to keep the emotions within natural bounds, Vatican Saying 21: “Human nature is not to be coerced but persuaded and we shall persuade her by satisfying the necessary desires if they are not going to be injurious but, if they are going to injure, by relentlessly banning them.”

“The word ataraxy implies a metaphor derived from the sea and the weather.  One of the original synonyms is “calm,” galenismos, of which the proper application is to the sea, tranquillitas in Latin.  The turmoils of the soul are specifically compared by Epicurus to storms and squalls at sea.  The chief causes of the soul’s turmoils are unreasonable fears concerning the gods and death and ignorance of the natural limits of pleasure and pain.  If a man has attained to true knowledge of these things and keeps his emotions within their natural limits, the reward is comparable to the peace “which passeth all understanding.”  For this statement there is a specific Epicurean text, if only the editors did not emend it, Vatican Saying 78: “The truly noble man busies himself chiefly with wisdom and friendship, of which the one is an understandable good but the other is immortal.” Paradoxical as it must seem, Epicurus knows no higher praise than to call a thing immortal; being opposed in this text to understandable, it must mean “passing understanding.”

“The love of Epicurus for his native Greece is on record and he preferred to live in Athens even in the days of its tribulations, but his philosophy was valid for all mankind. In his day there was in vogue a weird rite for the cure, as it would seem, of depressive melancholy. The participants were called Corybantes. The patient was seated upon a throne while the celebrants circled round and round with song and dance and a tumult of tambourines and horns. In the normal course of the cure the patient was first overcome with bewilderment, then fell into a coma, and finally awoke in ecstasy, a cured man, to join in the tumult. In the light of this custom we must interpret Vatican Saying 52: “Love goes whirling in dance around the whole earth veritably shouting to us all to awake to the blessedness of the happy life.” This tacit allusion to the well-known Corybantic rites should remind us that Epicurus, unlike the Stoics, was not distrustful of emotion; he asserted that the wise man would feel more strongly than the rest of men. His ataraxy, in spite of the dictionaries, cannot be equated with Stoic apathy.”

“While the general attitude toward Fortune is one of defiance, it can happen that this false deity seems to bring a shower of blessings. In such a case the proper attitude is caution and distrust.  These two attitudes are reciprocal to each other and are so expounded by Epicurus himself: “Nature teaches us when unfortunate not to set great store by good fortune and without being upset to accept the good things from Fortune and to take a defiant stand against the seeming evils from her hand.”  These reciprocal attitudes served Horace as a conceit for lyrical admonition to the impulsive Dellius in the ode beginningAequam memento rebus in arduis, “Remember to keep the spirit calm when the going is steep, not less restrained from overweening pride when things go well.”  The good Epicurean was always prepared for either issue, “hoping for the best, contemplating the worst.”  The over-all attitude is succinctly expressed in two words by Horace, nil admirari,” “never to be taken by surprise,” which, he adds, “is perhaps the one and only thing that can make and keep one happy.”  This is not to be confounded with Stoic apathy; the Epicurean did not suppress his emotions but controlled them by preparedness.”

Previous ArticleThe Key To Distinguishing The “Greatest Good” from the “Goal” of Life: “Every supreme good … is meaningless to the dead; every supreme good presumes life.”
Next ArticleVariations On A Majestic Theme – Vatican Saying 47