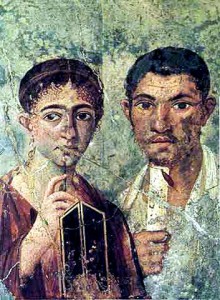 The question frequently arises, “How should one live today as an Epicurean?”  Under the theory that there is really nothing new under the sun, among the best ways of answering that question is to look to see how those who claimed to be Epicureans lived in the ancient world.  In addition to what we know about Epicurus from his biographers, and what we know about Lucretius’ life from his poem, we have another outstanding example from which there is much to learn:  the life of Titus Pomponius Atticus.

We know that Atticus was a devoted Epicurean from his correspondence with Cicero, but we also have left to us today the biography of Atticus written by Cornelius Nepos, a translation of which is available here and here from Epicurus.info.  Nepos does not attribute Atticus’ achievements to his Epicureanism, but we can put two and two together and learn from the choices made by a devoted Epicurean who had available to him all of the important texts and access to the greatest Epicurean scholars of the time.

I will not reproduce the biography in full here, but highlight a number of significant aspects that Nepos recorded.   In these comments we can derive traits of character which are timeless, which apply today as well as two thousand years ago, and which most of all derive directly from the application of Epicurean principles:

Previous Article“Failure of Nerve?” Or “Failure to Pay Attention?”
Next ArticleA Few Comments On An Excellent Introductory Article