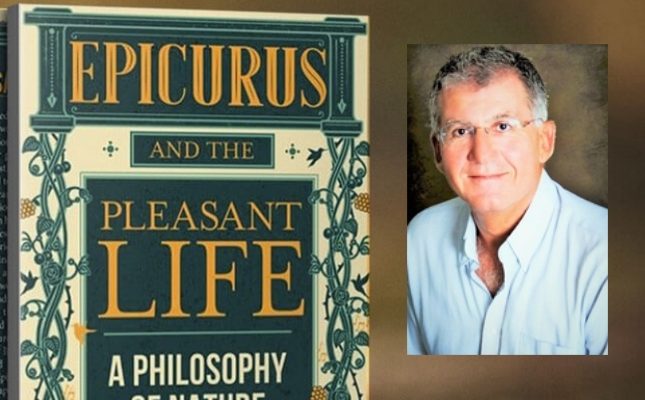 Haris Dimitriadis is author of “The Pleasant Life – The Philosophy of Epicurus.” Born in Greece, Haris studied Mathematics at the Aristotelian University of Thessaloniki as well as Economics at the London School of Economics.  His career spanned the business and banking industries and has settled into retirement. Through climbing the corporate ladder he found it brought little peace of mind and turned his attention to the philosophy of Epicurus.  Haris can be contacted through his website http://www.EpicurusPhilosophy.com.

Epicurus used to follow up on the progress of his students after they left the Epicurean Garden. He knew first-hand the healthy and disturbed aspects of their character, and the students knew well the essences of his teachings on their part. We would expect Epicurus to have been looser in expressing his views in a private letter than he would do in a book. Similarly, we would expect him to have tailored his writing according to the character and the needs of Menoeceus.

Had Epicurus known that this letter would have been the only authentic piece of evidence of his ethical theory left in the world, he would certainly have been more precise in the use of sensitive words to avoid misinterpretation. Therefore, while we may agree that Epicurus made a statement here that may appear to contradict other of his statements, at least  in the form in which it comes down to us, we also acknowledge that the philosophical community made an even greater mistake by drawing conclusions from a single piece of evidence.

Analytically, disturbance in the mind is the awareness of an unfulfilled need or desire by reason. Once the desire is satisfied, the turmoil vanishes, and the mind becomes peaceful. But we know that desire precedes the creation of the emotion. Since there is no way to measure the value of the emotion, we can at least find the upper limit of it by considering the status of our desires. Once a desire is fulfilled, the conscious mind is in peace and simultaneously pleasure reaches its upper limit. The activity that generated the pleasure has come to its end since the desire subsided and there is no reason for pleasure to increase any further.

It is obvious then that pleasure and ataraxia are separate phenomena, with their relationship being that the limit of pleasure corresponds to ataraxia. Their relation is one-to-one, but the two are not equal. It is analogous to the relation of two atoms of oxygen and an atom of hydrogen to a molecule of water. They are separate substances with different properties, except that when one thinks of two atoms of oxygen and one atom of hydrogen, they are instinctively moved to identify it as a molecule of water.

By analogy, Epicurus used to identify pleasure as ataraxia, although he knew that they are not comparable, and therefore not equal.

There is one more reason that Epicurus made himself misunderstood. Let me explain how.

We know that ataraxia is the end of life of the skeptics, and we also know that the Skeptics were one of the two adversary philosophies of his time, along with the Stoics. It seems that Epicurus agreed that ataraxia is an attractive state of mind to be in, but he disagreed that it is the end of life, and he disagreed on the whole with the Skeptics’ way of pursuing ataraxia.

Indeed, Epicurus objected extremely to the central skeptic idea that all things are indeterminate, and therefore we should suspend judgment, live passively, making no decisions, nor planning any actions. Instead, Epicurus praised active search of pleasure, creativity, ingenuity, and sober reasoning in order to maximize the pleasure in our lives and minimize suffering.

Therefore, we have two opposite philosophies (both in ends and in ways of life) who share only a single feature; the Skeptic end of life signals the achievement of the epicurean end. Their relation is one-to-one, but they are discrete.

It is, therefore, ripe time to clear things out and reestablish the true nature of things:

Similarly, the Epicurean life has nothing to do with the Stoic way of life (encouraging one to endure pain in order to achieve apathy), nor has it any relevance to a frugal or ascetic life. Quite the contrary, the Epicurean life rejoices the pleasure of life to its fullest.

Previous ArticlePeace and Safety for Your Twentieth of July – Live Like Epicurus!