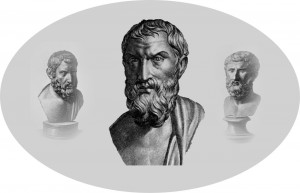 Sorry for the delay in posting this Happy Twentieth Message!  I have been reviewing my own computer files of key Epicurean literature, and recently I have uploaded one of the most important works that in my view every fan of Epicurus should have to Archive.org, where texts can be read easily on-line or downloaded in a variety of formats.  Epicurus – The Extant Remains – Cyril Bailey (1926) is the most comprehensive and authoritative compilation of the surviving works of Epicurus freely available on the internet.  Bailey’s scholarship on the text is excellent, and this book provides both the Greek and English translation, with extensive notes.   This is the text on which many online Epicurus websites is based.  There is more recent scholarship available, such as the Loeb edition of Diogenes Laertius, but that is still in copyright and therefore not free.  This Bailey volume, however is free and equal or superior to anything else out there.  It include the “Life of Epicurus” from Diogenes Laertius and all the important ancient texts other than Lucretius and the excerpts from Cicero.  However be warned:  in my view Bailey’s commentary on the “big picture” of Epicureanism, as well as on several important specialized topics, is not nearly as insightful as that of Norman DeWitt, and in some cases very off the mark.  At least part of the reason for this is that Bailey is personally very critical of Epicurus’ ethical views, and he allows his interpretations of the texts to be slanted and unfairly negative.  In general, however, when he is not criticizing Epicurus’ ethics, Bailey provides the most authoritative version of the texts and their background which is currently freely available.

In addition to Bailey’s book, I have also uploaded a copy of the available excerpts from Philodemus’ On Rhetoric, which was pointed out to me by our friend Ed Lee.  This version is from 1920 and was prepared by Harry Hubbell of Yale University.  The fragments here are much less extensive than those preserved in “Philodemus’ On Methods of Inference, which was translated by De Lacy and is available here.  Both are excellent resources, however.

Here are some other notes on online resources.

Epicurus and His Philosophy – Norman DeWitt (1954) This is currently available only on Scribd, which requires an account where you upload a file in trade, or else a small fee, to access it.  As I understand it, the copyright status of this book is unclear, and this is the only online version I am currently aware of.  Perhaps someone will download this version and upload it to Archive.org at a later date, but it does not appear to be there now.  Wherever you get it, in my view, this book is single most important work for both the best overview of Epicurean philosophy, and the best integration of all important aspects of the philosophy into a coherent whole.  Before you dive into the deeper commentaries and translations, get an overview of Epicureanism first so you will understand what you are reading, and so you will be in position to assess for yourself the controversies that exist in Epicurean scholarship.  In my view this is the modern book that best reflects Epicureanism in the way that ancient Epicureans would have wished to see it presented.

Lucretius – On The Nature of Things – Cyril Bailey (1936)  (Archive.org) Although in many cases I prefer the version by H.A.J. Munro, to which Bailey pays tribute in his introduction, Bailey’s version is probably the best mix of literal translation in understandable form.

A Few Days In Athens – Frances Wright (1822)  In my view this is the most creative, interesting, and pro-Epicurean book written since the ancient world.  The author is listed as Frances Wright, friend of the Marquis de Lafayette and of Thomas Jefferson, but apparently even in her own time there was controversy over whether Wright wrote this herself. Regardless of authorship, the book stands on its own as an excellent fictional account of a young student torn between the Stoic and Epicurean schools in ancient Athens.  The depth of understanding of Epicurean doctrine displayed here is very helpful for setting out the differences between the schools of Epicurus and other competing ancient philosophers.

St. Paul and Epicurus – Norman DeWitt (1954)   This book is interesting mainly for its review of New Testament references and how they likely refer to Epicurean ideas.

The Greek Atomists And Epicurus – Cyril Bailey (1928) (Scribd)  The scholarship here is undeniable, but so is the bias against Epicurean ethics.  I debated whether to list it here, but the book does contain a lot of background on Democritus and other “atomists,” and it can be very valuable if you keep in mind that Bailey’s commentary on Epicurus is unfairly negative.

[info_box]Quick Links: Epicurus – The Extant Remains (Bailey) | Diogenes Laertius Book X (Yonge) | Lucretius: On The Nature of Things | Frances Wright: A Few Days In Athens | Philodemus: On Methods of Inference | Philodemus: On Rhetoric | The Inscription of Diogenes of Oinoinda
[/info_box] ________________