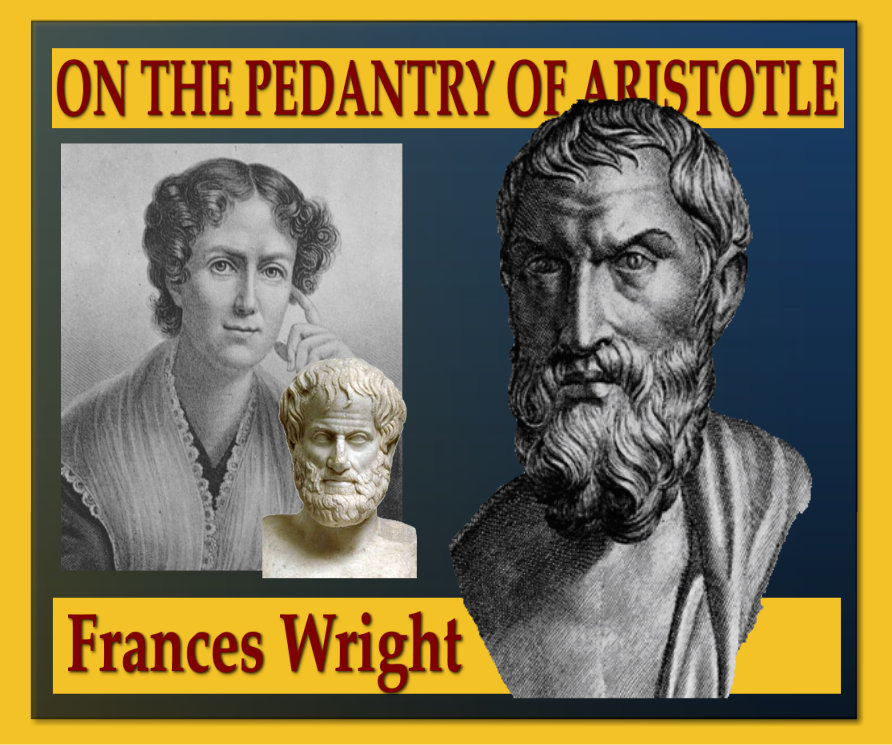 Hiram Crespo recently posted on his blog, The Autarkist, about the work of Michael Onfray and his view of the need for a counter-history of philosophy to free it from the Platonic-Aristotelian orthodoxy.

Tonight I’d like to point out two aspects of Frances Wright’s “A Few Days In Athens” that follow right along with Onfray’s point.

Wright makes the first point in her introduction, when she points out that philosophy on continental Europe in her day (the early 1800’s) was no longer friendly to study of the classics. Instead, the classics had been replaced with more politically-correct reading, to the point where the “scholar who restored the manuscript” (a fictional device which was a screen for Wright herself) was reluctant to identify himself:

Since the establishment of the saintly domination of the Vandals throughout the territories of the rebellious and heterodox Italy, and particularly in consequence of the ordinance of his most orthodox, most legitimate, and most Austrian Majesty, bearing that his dominions being in want of good subjects, his colleges are forbidden to send forth good scholars, it has become necessary for the gownsmen of the classic peninsula to banish all profane learning from their lectures and their libraries, and to evince a holy abhorrence of the sciences and arts which they erst professed. The list of the class-books now employed in the transalpine schools is exceedingly curious; I regret that I have mislaid the one lately supplied to me by an illustrious Italian exile. My memory recalls to me only that in the school of rhetoric, the orations of Cicero are superseded by those of the Marquis of Londonderry, and the philippics of Demosthenes by those of M. de Peyronett; that the professors of history have banished the decades of Livy for the martyrs of Mons. de Chateaubriand; and that the students of Greek, in place of the Odes of Pindar, and the retreat of the ten thousand from Cunaxa, construe the hexameters of the English Laureate, and the advance of Louis the XVIIL upon Ghent. In this state of the Italian world of letters, it is not surprising that the scholar, to whose perseverance, ingenuity, and learning, the public are indebted for the following fragment, should object to lay claim to the honor which is his due.

Later on in the book, a the end of Chapter 15, Wright returns to the warping of philosophy by the orthodox establishment, and she laments the toll it has taken on Epicurean philosophy in particular:

It might seem strange that, while the truth of the leading principles of the Epicurean philosophy have been long admitted by all sound reasoners, the abuse of the school and of its founder is continued to this day: this might and would seem strange and incomprehensible, did we not, on every subject find the same cowardly fear effacing, openly and honestly, the prejudices of men. Teachers, aware of the ignorance of those they teach, develop their doctrines in language intelligible only to the few; or, where they hazard a more distinct exposition of truth, shelter themselves from obloquy by echoing the vulgar censure against those who have taught the same truth, with more explicitness, before them. The mass, even of what is called the educated world, know nothing of the principles they decry, or of the characters they abuse. It is easy, therefore, by joining in the abuse against the one, to encourage a belief that we cannot be advocating the other. This desire of standing fair with the wise, without incurring the enmity of the ignorant, may suit with the object of those who acquire knowledge only for its display, or for the gratification of mere curiosity. But they whose nobler aim, and higher gift it is, to advance the human mind in the discovery of truth, must stand proof equally to censure and to praise. That such lips and such pens should employ equivocation, or other artifice, to turn aside the wrath of ignorance, is degrading to themselves and mortifying to their admirers. The late amiable and enlightened teacher, Thomas Brown, of Edinburgh, whose masterly exposition of old and new truths, and exposure of modern as well as ancient errors, has so advanced the science he professed, is yet chargeable with this weakness. After inculcating the leading principles of the Epicurean philosophy, and building upon those principles, the whole of his beautiful system, he condescends to soothe the prejudices which all his arguments have tended to uproot, by passing a sweeping censure on the school, whose doctrines he has borrowed and taught. We might say — how unworthy of such a mind! But we will rather say — how is it to be lamented that such a mind bears not within itself the conviction that all truths are important to all men; and that to employ deception with the ignorant, is to defeat our own purpose; which is, surely, not to open the eyes of those who already see, but to enlighten the blind!

I will have much more to say about this subject over time, but it is a continuing theme of those who would reinvigorate the study of Epicurus.  Not only is his name disparaged in the popular understanding as a promoter of debauchery, Epicurus’ philosophy is distorted in the academic world from the opposite perspective – by those who make him seem to be more of an ascetic than the Stoics.

Both of these errors need to be exposed if the true philosophy of Epicurus is to take its much-needed place in the modern world.

Note: the graphic attached to this post comes from a previous post on these pages – On The Pedantry of Aristotle – in which Wright makes a point similar to the one discussed here today.