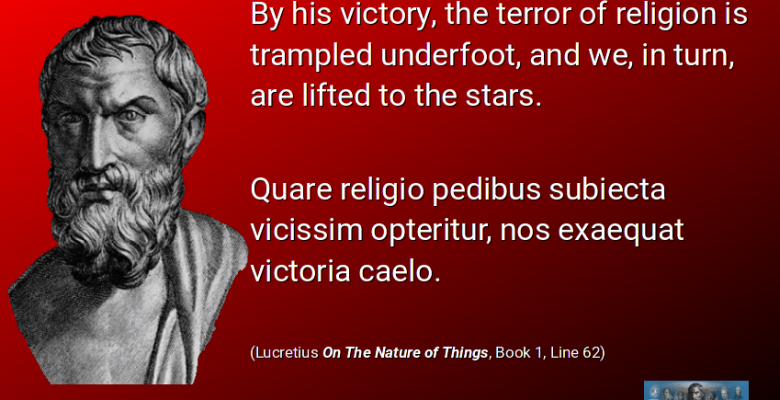 By his victory, the terror of religion is trampled underfoot, and we, in turn, are lifted to the stars.   (Lucretius Book 1, Line 62)

This highly memorable line is a good one to review the Latin and alternate translations. Here are several renditions in English, and all of them make much the same point.

Brown: And so Religion, which we feared before, by him subdued, we tread upon in turn. His conquest makes us equal to the Gods.

Munro: Therefore religion is put underfoot and trampled upon in turn; us his victory brings level with heaven.

Bailey: And so religion in revenge is cast beneath men’s feet and trampled, and victory raises us to heaven.

Loeb: Therefore superstition is now in her turn cast down and trampled underfoot, whilst we by the victory are exalted high as heaven.

Smith: So now the situation is reversed: superstition is flung down and trampled underfoot; we are raised to heaven by victory.

It appears to me that Munro might be the most strictly literal, with Brown and Humphries emphasizing the terror / fear of religion, while Bailey inserts “in revenge.” Humphries’ and Munro’s “trampled” would seem to be a good rendition of “subjected to the feet.”

However Loeb and Smith are particularly disappointing in choosing to deflect the blow against “religion” by inserting “superstition” in its place. While I think that is probably a defensible choice if one takes the position that the Epicureans considered their view of the gods to be “true religion” and the standard views of the majority as “superstition” – that editorial choice really does not seem warranted given that the Latin is “religio” and in our modern context the clear indictment by Lucretius and Epicurus was against what we today regard as “religion.”

At any rate, anyone who seeks to soft-pedal Epicurus’ views on the harm caused by standard supernatural religious viewpoints will be hard-pressed to deal with this passage.