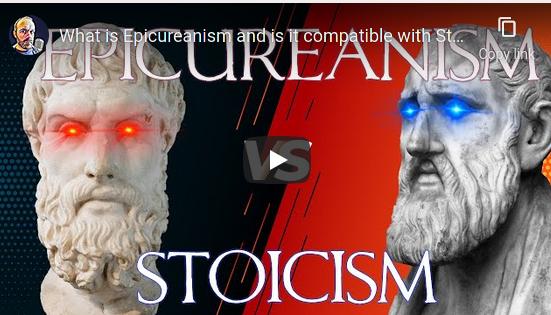 We’re never very far from the “Stoic v Epicurean” debate, and I want to thank Shahab Ghadiri for bringing to my attention a relatively recent (November 2020) video by a Stoic comparing the two philosophies. I would argue the video makes a series of flawed assumptions about Epicurus, and as a result it comes to some very wrong conclusions. However the video is very well produced and focuses on many key issues about while Epicureans need to understand what is at stake. Rather than link to the video itself, I’ll link to a brief review I put together of the key points that I would argue an Epicurean should keep in mind. The video deserves a much longer response, because it is very typical of how many modern presentations of Epicurus are slanted in the Stoic/Ascetic direction. Understanding the issues involved in that “slant” is one of the key challenges we face, and this video gives us a good opportunity to discuss them. You might phrase the issue, as the video contends, that Epicurus and the Stoics are incompatible only “in theory” but are very compatible “in practice.” I will argue that they are incompatible in both theory and practice.