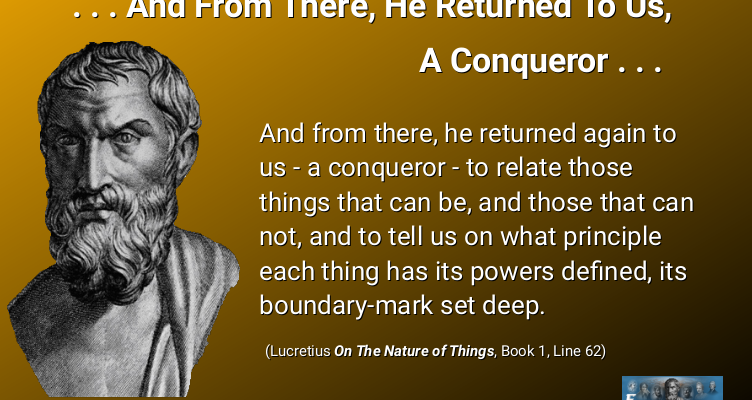 And from there, he returned again to us – a conqueror – to relate those things that can be, and those that can not, and to tell us on what principle each thing has its powers defined, its boundary-mark set deep. (Lucretius Book 1, Line 62)
Here are several observations from this passage:
1- Lucretius is observing that Epicurus figuratively traveled across space with his mind and then returned to us. Maybe this is entirely poetic fancy, and certainly it isn’t meant to be taken literally, but the allusion to traveling to observe something up close may be more than just a poetic device. Diogenes Laertius, for example, explained Epicurus’ concept of “Waiting” to get evidence sufficient to make a decision by analogizing the process to walking toward a tower to see it if indeed is still as round up close as it appears to be from a distance.
2 – Lucretius calls Epicurus a “conqueror” or describes him as returning “in victory” or “triumphant.” That sounds like a description of an active process of grasping hold of something that was not formerly within one’s grasp – which sounds to me like something Lucretius wanted to describe as a process of action, rather than pure contemplation for the sake of contemplation.
3 – “Those things that can be and what cannot” – That sounds like it is at least a reference to Epicurus’ views of free will, in which some things are possible to us and others are not, and it’s probably also a reference to the physical universe in which in Epicurus’ view it is not possible that the universe as a whole had a beginning, or had an end, or that the universe could be reigned over by supernatural forces.
4 – “On what principle each thing has its powers defined.” – Would this not likely at least in part be a reference to how the elementary particles are what give rise to the qualities of the bodies that we see in our level of experience, and how the qualities of those bodes are defined and limited in what they can and cannot do by the way their elemental particles are combined?
5 – “It’s boundary-mark set deep.” One concept that comes to mind here would probably be “finis / end / limit” and its probably very significant that of all the things that Lucretius chose to praise about Epicurus’ accomplishments, it was his work on the elemental particles and how they provide the limits and boundaries of human life that he focused on the most.
Alternate translations:
Bailey: “whence in victory he brings us tidings what can come to be and what cannot, yea and in what way each thing has its power limited, and its deepset boundary-stone.
Munro: “whence he returns a conqueror to tell us what can, what cannot come into being; in short on what principle each thing has its powers defined, its deep-set boundary mark”.
Brown: “from thence returned, triumphant; told us what things may have a being, and what cannot; and how a finite power is fixed to each; a bound it cannot break.”
Discussion at EpicureanFriends.com
Previous ArticleFoundations 003 – “Thus The Living Force of His Soul Won The Day.”
Next ArticleFoundations 005 – “By His Victory Religion Is Trampled Underfoot”