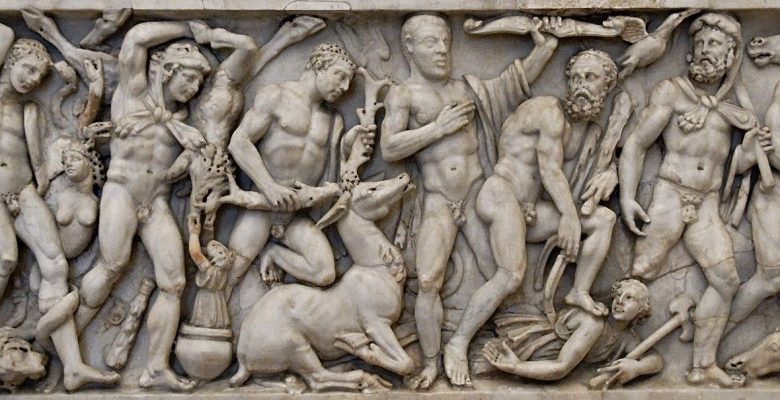 Hercules and his labors are referenced in several places in Lucretius, in at least one instance comparing favorably to them the achievements of Epicurus. Someday when we have time we could pull together a list of references where they appear and see how many are actually referenced. I know I remember the Nemean lion, the Lernaean Hydra, and I think the Cretan Bull. This graphic doesn’t show all twelve but it, along with this list tweeted by the Trimontium Trust, is still a good reminder. https://trimontium.co.uk/

A #Roman relief of the 12 labours of Hercules representing from left to right the Nemean lion, the Lernaean Hydra, the Erymanthian Boar, the Ceryneian Hind, the Stymphalian birds, the Girdle of Hippolyta, the Augean stables, the Cretan Bull & the Mares of Diomedes -3rd Century AD pic.twitter.com/XSAHLRjzpA

Opening of Book 5 (Bailey): “But a good life could not be without a clean heart; wherefore more rightly is he [Epicurus] counted a god by us, thanks to whom now sweet solaces for life soothe the mind, spread even far and wide among great peoples. But if you think that the deeds of Hercules excel this, you will be carried still further adrift from true reasoning. For what harm to us now were the great gaping jaws of the old Nemean lion and the bristling boar of Arcadia? Or what could the bull of Crete do, or the curse of Lerna, the hydra with its pallisade of poisonous snakes? what the triple-breasted might of threefold Geryon? [How could those birds] have done us such great hurt, who dwelt in the Stymphalian [fen], or the horses of Diomede the Thracian, breathing fire from their nostrils near the coasts of the Bistones and Ismara? Or the guardian of the glowing golden apples of Hesperus’s daughters, the dragon, fierce, with fiery glance, with his vast body twined around the tree-trunk, yea, what harm could he have done beside the Atlantic shore and the grim tracts of ocean, where none of us draws near nor barbarian dares to venture? And all other monsters of this sort which were destroyed, had they not been vanquished, what hurt, pray, could they have done alive? Not a jot, I trow: the earth even now teems in such abundance with wild beasts, and is filled with trembling terrors throughout forests and mighty mountains and deep woods; but for the most part we have power to shun those spots. But unless the heart is cleansed, what battles and perils must we then enter into despite our will? What sharp pangs of passion then rend the troubled man, yea and what fears besides? what of pride, filthiness and wantonness? what havoc they work? what of luxury and sloth? He then who has subdued all these and driven them from the mind by speech, not arms, shall this man not rightly be found worthy to rank among the gods? Above all, since ’twas his wont to speak many sayings in good and godlike words about the immortal gods themselves, and in his discourse to reveal the whole nature of things.”