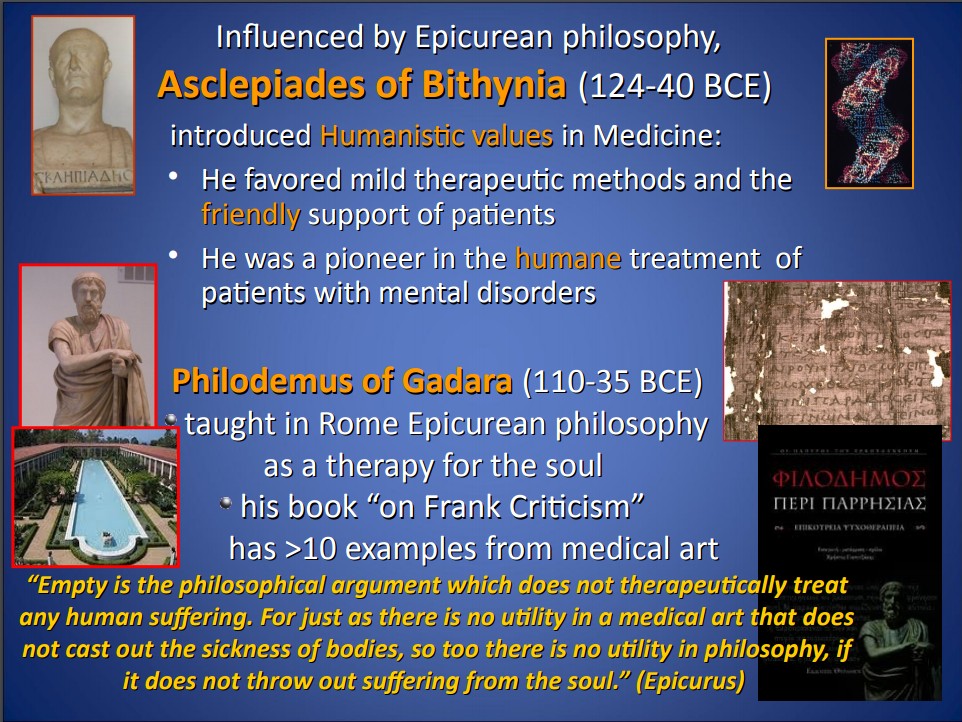 Christos Yapijakis, Assistant Professor of Neurogenetics at the University of Athens School of medicine, has kindly allowed us to share his slide presentation given recently to the 11th World Congress on Controversies in Neurology (CONy) Athens, Greece, March 23-26 2017. Below is an abstract and I will post the full set of slides here:   Yapijakis_PRECEPTS_CONY2017:
HIPPOCRATIC CORPUS WORK “PRECEPTS”: PHILANTHROPY AND UTILITY IN MEDICINE
Christos Yapijakis
University of Athens Medical School
Hippocrates of Kos (460-377 BCE) is recognized as the father of scientific medicine, since he was free from superstitious beliefs and based diagnostic hypotheses on clinical signs. The renown Greek physician and his followers wrote many works, which constitute the Hippocratic Corpus. In this collection of medical texts, some were obviously composed several centuries after Hippocrates, since they contain anachronistic philosophical views and language styles. One such work, written in Greek but also containing latinisms, is ‘Precepts’ (Παραγγελίαι), a book devoted to medical ethics. This text clearly comprises many concepts introduced by Asclepiades of Bithynia (124-40 BCE), a Greek physician influenced by Epicurean philosophy who was famous in Rome for his humane and naturalistic opinions. ‘Precepts’ pronounces that “healing is a matter of time, but sometimes also a matter of opportunity”, as a reference to Asclepiades’ original notion of acute disease. It emphasizes that medical practice should be based on “empirical observation combined with reason and not on theories” and “evident facts transmitted to the mind through the senses”, following the Epicurean approach based on sensual observation and inference by means of signs. It articulates several Epicurean views for the behavior of physicians, including the utility of actions and not pretentious words, the avoidance of arrogant attitude and flamboyant appearance, as well as their concern for the pleasurable state of the patients. Furthermore, Yapijakis_PRECEPTS_CONY2017it contains the Epicurean motive of goodwill to all humans: “For where there is philanthrophy (friendship for humans), there is also friendship of the art (of medicine)”.