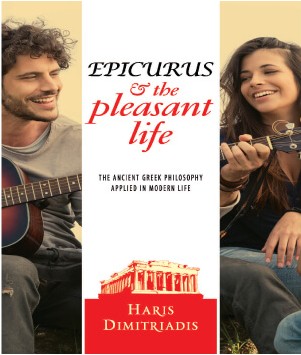 Another Important Step Toward Correcting the Record On Epicurus and Living A Better Life Today – Haris Dimitriadis’ Epicurus and the Pleasant Life.

July 6, 2017 – I hope to come back to this review and add more detail, but I have now finished reading the book and I don’t want to let more time go past without adding my commentary. There are very few books available which convey an accurate and positive summary of Epicurean philosophy and its application to the modern world, and this is one of the best. Mr. Dimitriadis has produced a sweeping and well-researched work that can help everyone, no matter their level of background in philosophy, apply Epicurean wisdom to their own lives. Most works targeted at academics focus so much on details and comparisons with other philosophers as to be useless to the average reader, and most works targeted at average readers convey such a corrupted picture of Epicurus (mostly as a retiring quietist whose main interest seems to be sipping wine and cheese) as to be worse than worthless. In each chapter of his book, Mr. Dimitriadis provides a survey of relevant opinions, provides a concise explanation of Epicurus’ view, and then summarizes the major points in an easily-understandable way.

For those who read this and wish a more thorough grounding in the basics, the work Mr. Dimitriadis has cited as one of his major sources is a great next step: Norman DeWitt’s “Epicurus and His Philosophy.” But for the general reader who wants an introduction and who wants to know how reading further can benefit him, Mr. Dimitriadis’ book provides all the motivation anyone could need. Many of the other commentators whose books are available here on Amazon almost seem to be speaking of a different person. The true views of Epicurus are found by actually reading the texts, as Mr. Dimitriadis has, rather than reading what hundreds of years of adverse commentators have said about his views. There is much more to be done to rediscovering and reintroducing true Epicurean views to the modern world, but Mr. Dimitriadis’ book is an important step in correcting the record.

Would we still be talking about Epicurus if “Live Unknown” were a true and accurate summary of Epicurean philosophy? Of course we would not, and neither would Epicurus have devoted his life to writing and cultivating a “world-wide” community of friends who shared his views of life. Many are the untrue allegations against Epicurus which have been leveled even by those who represent themselves as friendly to Epicurus. Now that Mr. Dimitriadis has produced an important work which combines excellent advice with accurate philosophical explanations, fans of Epicurus have an important tool at their disposal toward the goal of widening their own circle of Epicurean friends. I advise both reading this book and sharing it with others as a step toward building a circle of friends with whom you can say (either with a smile, or with a full knowledge of the accurate meaning of the words, or with both!) that you are living as “gods among men.”

Has someone included this reference already? If not, allow me: Mr. Dimitriadis has “…struck a blow for Epicurus, that great man whose holiness and divinity of nature were not shams, who alone had and imparted true insight into the good, and who brought deliverance to all that consorted with him.”

Previous Article“When the Gospel of Minimalism Collides With Daily Life”
Next ArticleNew Handout – Applications of the Fundamentals of Nature.