WHOSE genius is powerful enough to frame a poem worthy of the grandeur of the Nature of Things — and of Epicurus’ discoveries?

WHO is so great a master of words that he can devise praises equal to those which Epicurus deserves — he who left us such magnificent prizes, won and earned by his own genius?

NO ONE, I think, who is formed of mortal body.  For if we would speak as the grandeur of these things demands, we would think of Epicurus as GODLIKE, for it was he who first discovered a plan of life which we now term wisdom itself.  And it was Epicurus who by practiced skill rescued the life of men from billowing clouds of thickest darkness, and brought life to harbor in perfect calm and brilliant light.

COMPARE the godlike discoveries of others in ancient times.  “Ceres” is famed because he showed men the use of corn, and “Liber” showed men the juice of the grape.  But life subsists well enough without these, and some nations even now live without them.

BUT A HAPPY LIFE IS NOT POSSIBLE WITHOUT A CLEAN BREAST — and so with all the more reason than Ceres or Liber we deem Epicurus a god, for it is from him which come those sweet solaces of existence which even now are distributing themselves over great nations and gently soothing the minds of men.

FOR UNLESS THE BREAST IS CLEARED, what battles and dangers find their way into us!  What poignant cares — inspired by lust  — tear apart the distressed man, and what mighty fears!  Pride, lust, wantonness, luxury, and all sorts of sloth!  What disasters they occasion!

And so when we speak of Epicurus, who showed us how to subdue all these and banish them from our minds by words, rather than by force — does he not justly deserve to be ranked among the gods? 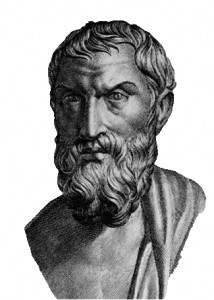 Adapted from the opening of Book V of De Rerum Natura, by Titus Lucretius Carus, as translated by H. A. J. Munro.

Previous ArticleEven For Physicists, It Is Not Possible To Live Happily Unless One Lives Wisely, Honorably, and Justly…..
Next Article“Reasoning In Accordance With The Facts”