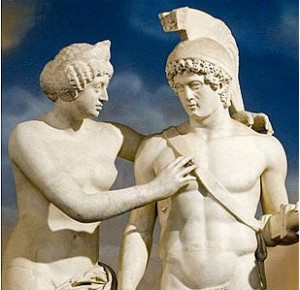 Imaginary Person 1:  “I do believe there is a God, but I don’t really believe all that is written and I have to say it scares me to even say that – but I don’t.  Never have.”

Imaginary Epicurean:   “Our friends in the Christian/Judaic/Islamic world want you to think the alternatives are (A) the universe was created by Jehovah god of Abraham or (B) the universe arose out of nothing — or out of chaos — by accident.  That is a false argument and the root of their deception.  The truth is (C):  the universe is composed of matter that has always existed and always will.  And the matter of which the universe is composed operates according to what Thomas Jefferson wrote about in his Declaration of Independence:  according to the laws of Nature.  And last but not least, among the the things that exist — subject to those same laws just like us — are Nature’s God(s).  The Jehovah, god of Abraham who ordered the slaughter of countless animals, children, and nations in the Old Testament and the Koran never existed, and is not at all the same as the god(s) of Nature.  All we know for sure about the god(s) of Nature is that perfect beings do not have troubles of their own, perfect beings do not make trouble for others, and perfect beings do not sleep quietly for eternity and then wake up one day to create the Earth and start trouble for us.  And aside from their providing an image of perfect happiness that serves as a model for what we’d like to achieve in our own lives, there’s really nothing else we need to know about them.”

Imaginary Person 1: “You would be surprised at the number of people who try to ‘convert’ me, because I say that I believe in God, but that it doesn’t matter if Jesus is the Son of God or Mohammed was a Great Prophet.  I guess it’s really important, but for the life of me – I don’t really understand it!”

Imaginary Epicurean:   “I wish I could say I were surprised.  The followers of those religions try to convert you because they have been brainwashed by the priests to think that your conversion is a litmus test for you to get into heaven and avoid hell for eternity.  Many of these are innocent people of good will, but they have NO evidence to support their argument.  The priests of those religions try to convert you because they know that if you ever stop believing in heaven and hell, and if you stop believing that they hold the key to both, you will forever be free of their threats.  At that point they will have no further power over you, and you will be free of their demands for your obedience and your offerings.  You’ll begin to realize that you shouldn’t look to imaginary gods, or to fancy teachers who have no evidence for their arguments — you’ll begin to realize that you should look to Nature.  Nature lays out for us all the evidence we need to live happily, and although it’s not necessarily easy, all you really have to do is study those Natural laws that Thomas Jefferson talked about.”

Imaginary Person 1:  “Wow – well this Epicurus you like to talk about, I thought all he was concerned about was running away to his own private garden and enjoying his wine, women, cheese, and parties — but you sound so serious, and you sound like you’re concerned about me!  Tell me what Epicurus taught.”

Imaginary Epicurean, smiling:  “I just did.”

Previous ArticleLeave Apathy To The Stoics, and Strive to “Never Be Taken By Surprise.”
Next ArticleSt. Paul vs. Epicurus