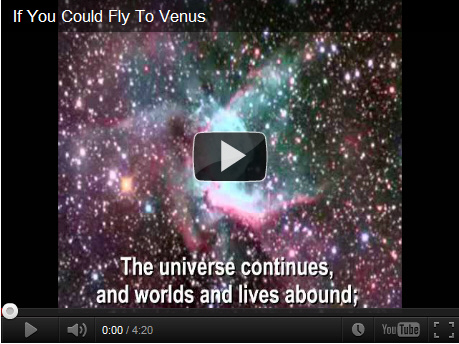 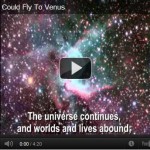 I recently came across the Mormon hymn “If You Could Hie to Kolob,” which I find interesting because  — with only a few alterations — it can be turned from something absurd to something not too different from what Lucretius himself might have written.  I have taken the liberty of adding a running caption with “corrected” wording in accord with Epicurean doctrine, and I have posted the results below.

There are two versions – one which tracks the standard lyrics, and one which tracks a variation that is available on the internet.  Both contain very memorable music, and with these captions I thought readers of this blog might find them enjoyable.  I have also posted the revised lyrics with comments below.  Here are both of these videos in Youtube format:

1. If you could fly to Venus In the twinkling of an eye,
And then continue onward, With that same speed to fly,
Do you think that you would ever, Through all eternity,
Find out a generation where gods began to be?

2. Or see a grand beginning, Where space did not extend?
Or view a last creation, Where gods and matter end?
Me thinks that Nature whispers, “No man has found new space,’
Beyond an outside curtain, Where no thing has a place.”

3. The universe continues, And worlds and lives abound;
Improvement and regression, Have one eternal round.
There is no end to matter; There is no end to space;
There was no time before time; Time has no “end” to face.

1.  If you could fly to Venus In the twinkling of an eye,
And then continue onward, With that same speed to fly,
Do you think that you would ever, Through all eternity,
Find out a generation where gods began to be?

2. Or see a grand beginning, Where space did not extend?
Or view a last creation, Where gods and matter end?
Me thinks that Nature whispers, “No man has found new space,’
Beyond an outside curtain, Where no thing has a place.”

5. There is no end to Nature; Our lives are ours to love;
There is no wind of fortune; There is no Heaven above; no Hell below; no goal but love!

Verses One and Two are stated in the form of questions, which may initially be unclear to some.  Of course the Epicurean answer (which interestingly is also the answer in the Mormon original) is that the person addressed could NOT ever find a place to which matter and space do not extend, because the universe has no limits.  It is also impossible to find a time before gods began, because the Epicurean gods, which are in all respects a part of and subject to Nature, are eternal by their Nature, and there was never a time before the gods existed.  (And thus the gods never experienced a progression in development in which they one day woke up and decided to create men for the gods’ own amusement.)

Likewise, there is no “last creation” that marks any final boundary or that was created by any god, because Nature is eternal and had no beginning.  There is also no space “outside a curtain” — outside the universe — from which any matter or anything else may enter into this universe or escape to another.

Verse Three of the Mormon original also tracks Lucretius.  We are told clearly in De Rerum Natura that other worlds like ours exist and many living beings “abound” in the universe.  This Epicurean doctrine is based on the observation that we see here on Earth that Nature does not make only a single one of any kind of thing, and thus we have compelling evidence – and nothing to contradict it – that supports the conclusion that Nature has not made only one Earth and only one race of men.

It is critical to understand that reference to “Virtue” here is of the Epicurean type.  Virtue is NOT its own reward, as held by Plato, but a description of the strong and proper way of life one pursues in following the path of Nature to achieve happiness.

“Right” is a reflection that Epicureanism is a dogmatic philosophy that instructs us to make clear pronouncements on truth and falsehood based on the canon of the five senses, the pain / pleasure mechanism, and the anticipations.  At the same time, we must not forget that it is right to “wait” and refrain from concluding that something is certain when there is no evidence to support that conclusion, or where the evidence is conflicting.

In Verse Four, in reference to the goal being “love,” the word “love” serves as a synonym for purposeful happy living.  In this sense, love is the action of a living being which willfully values those things which are dear to it and bring happiness to it.  And it is of course core Epicurean doctrine that there is no Fate, no Heaven, and no Hell to serve as obstacles to our attainment of a happy life — our lives are ours to live, and ours to love.

Previous ArticleAn Intersection of Epicurean History With The Modern World: Happy Hanukkah to the Sadducees!
Next ArticleA Song By A Fan of Epicurus – “Letter to Menoeceus”