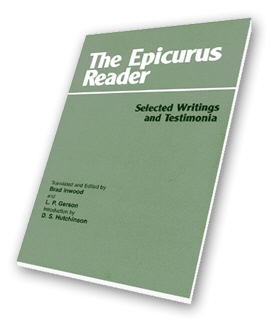 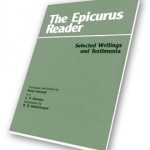 One of the best articles available for explaining the basics of Epicurean philosophy is the introduction to the book “The Epicurus Reader – Selected Writings and Testimonia, by D.S. Hutchinson.  The introduction  is available on the internet here at Epicurus.info.

A friend posted it a link to it today which gave me the occasion to reread it.  In doing so I came across a few minor comments that I will post here for future reference:(1) “Our souls are flimsy things which are dissipated when we die…” <<< Absolutely true, but I don’t care for the word “flimsy” in this context. In my experience the word has a demeaning or dismissive connotation.  A better connotation would focus on “endearing,” as in the “little soul” passage from the final words of Hadrian:
Little soul, wandering, charming,hosted by the frame of this bodywhich now it abandons in place;So pale, so rigid, so exposed,no more to sunlit days will you bring joy.
Flimsy things can be left behind without concern, but — however light and airy the soul might be — “don’t leave home without it.”(2) “If the gods do not exert themselves for our benefit, how is it that the world around us is suitable for our habitation? It happened by accident, said Epicurus, an answer that gave ancient critics ample opportunity for ridicule, and yet it makes him a thinker of a very modern sort, well ahead of his time. Epicurus believed that the universe is a material system governed by the laws of matter.” <<<<< Like “flimsy”, in my experience the word “accident” has a demeaning connotation in everyday use that I don’t think is appropriate. Even worse would be the implication that “accidental” means that “any kind” of fantastic world could exist, rather than one that is consistent with Natural law. Just as is stated correctly in the last part of this passage, the universe arose according to “the laws of matter,” rather than “randomly” or “without any guidelines at all” which are implications many people include in their ideas of “accidental.” The heart of the meaning we are trying to convey is “un-caused by any supernatural or master force,” not that it’s possible for fairy-tale fire-breathing dragons to exist (as in the example Lucretius gave in De Rerum Natura).(3) “Perhaps the best thing of all would be to have friends who shared our Epicurean philosophy with us; many Epicureans lived in small Epicurean communities, as did the followers of Pythagoras in earlier times.” <<<<< This point has bothered me for a while — exactly where is the evidence that “many Epicureans” lived in “small communities?” Certainly Epicurus himself did (he had to live somewhere!) but are there reliable text references that he advocated that others follow a communal lifestyle anywhere but in his own case in Athens? “Schools” are one thing (again, teachers have to live somewhere) but I can’t remember any texts that recommend communal living as a general lifestyle. Friends?- yes. Neighbors? – yes. But “communal compounds” seems to me to be much further than the texts convey. Same comment applies to this from the article: “This way of living claimed many thousands of committed followers, all over the ancient Mediterranean world, in cooperative communities that lasted for hundreds of years.” Is here evidence that ANY “cooperative community” existed other than in Epicurus’ time in his own house, much less “many”? Anyone know any references in the reliable ancient texts to support that? I think a lot of us have the idea that we’re missing something by not living in a commune, but is there really any evidence to support that idea?  {I will revise this post with any good cites I find on this topic.}(4) “One of the remarkable features of Epicurus’ philosophy is that it can be understood at several levels of subtlety. You don’t need to be a philosophical genius to grasp the main points, which is why Epicurus coined slogans and maxims for ordinary people to memorize…. Suppose, though, that you’re not convinced that ‘death is nothing’, for example, and you want proof before you organize your life around that idea.” <<<<<  I do not think Epicurus would want it to be suggested that it is not important to study the proofs. “You don’t need to be a genius” is certainly correct,” but “Suppose…you want proof” might imply to some that it is OK not to care about proof at all. I think that would be a poor conclusion to draw — some familiarity with the proof is essential or it’s inevitable that you’ll backslide. And backsliding due to lack of knowledge is such a danger that it is warned against explicitly by Lucretius, in repeating over and over the passage that the only way to remedy our fears, which are so much like those of children in the dark, is through the study of nature.
******
But to repeat, my quibbles are few and minor. This is an EXCELLENT article!
Previous ArticleHow To Live Like An Epicurean: The Example of Titus Pomponius Atticus
Next ArticleMysticism, The Gods, And the Epicurean Rules of Evidence