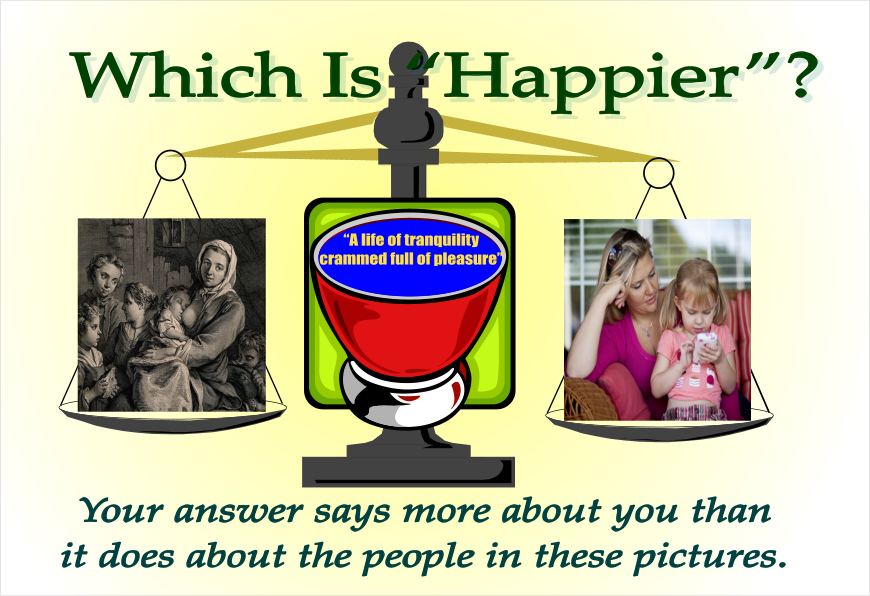 Hiram Crespo recently published a very good article in Humanist Magazine entitled “Whose Pleasure? Whose Pain? Applying the Hedonic Calculus to Public Policy.”  This is a topic that is going to recur frequently, because many people are interested in using modern developments in statistical survey methods to “measure” happiness across groups.  So just like Hiram did in his article, we need to keep several important things in mind as we think about how we frame our surveys and what it is we are really measuring:

So let’s turn to the recent “happiness” survey discussed by Time.com, which includes this in its details:

“The centerpiece of the OECD short module was a life evaluation question, asking respondents to assess their satisfaction with their current lives on a 0 to 10 scale. This was to be a ccompanied by two or three affect questions and a question about the extent to which the respondents felt they had a purpose or meaning in their lives. The latter question, which we treat as an important support for subjective well-being, rather than a direct measure of it, is of a type that has come to be called “eudaimonic.” This is in honor of Aristotle, who believed that having such a purpose would be central to any reflective individual’s assessment of the quality of his or her own life.”

Can anyone cite the part of the letter to Menoeceus where Epicurus advised us to look for “meaning”or “purpose” in life, instead of pleasure?  Should Thomas Jefferson have written that all men are created with life, liberty, and pursuit of “meaning and purpose”? Why is it necessary to separate out “meaning and purpose” from happiness?  Is it possible that Aristotle did not think that pleasure is a sufficient meaning and purpose for life? And that he thought himself qualified, where Nature had failed, to step up to the plate and remedy Nature’s mistake?

Human nature has not changed in 2000 years, and we don’t need a scientist to tell us when we are living pleasurably – if “living pleasurably” is indeed what we are talking about when we discuss “happiness.”

And that is what is not clear about the survey and needs to be examined. Is the purpose of the survey really to measure “pleasure”? Or is it measuring “happiness as defined by Aristototle and similar thinkers” who have their own ideas of what “the good life” really means?  Such surveys tend to turn into political wish-lists rather than anything to do with ordinary notions of “pleasure.”

“Meaning” and “purpose” are words, when used in this context, that are loaded with questions about “higher purpose” and “whose purpose” and “meaning to whom.”   Al of these can easily be confused to presume that the answers have to come from religion or “virtue ethics” in ways that are entirely separable from pleasure as ordinarily understood. “Science” can very easily sneak its own priorities into any discussion depending on who is asking the questions, why they are asking the questions, and what they intend to convey by the questions they ask.  [Note:  No one is as big a fan of true science as I am, but the way arguments are tossed around today the claim of science can never be taken on face value until you verify that you understand what they are talking about. Aristotle is a major case in point. Nobody went to more effort to categorize and subcategorize than he did, but in the end everything for him came back to his “prime mover.”]
So when Epicurus holds that “all pleasures are good” it is very possible that he would reject the idea that it is even possible to stack up one person’s pleasures against another person’s, or even to attempt to evaluate a single person’s level of pleasure for him.  In the Epicurean texts you see nothing, as far as I can tell, about lists of pleasures that could then be ranked according to intensity or quality even with a single person, much less across multiple people.  And here’s the problem with that:

If pleasure is a faculty analogous to a sense (which I think it is), then when you try to isolate pleasures as “things” so you can rank them, you are far off track. If experiencing pleasure is like seeing or hearing, you would be essentially asking, “How would Epicurus measure the things that a world of seven billion people sees and hears? Such a survey might very well be possible, but to what result?  Establishment philosophers like Aristotle tried to come up with lists of pleasures that are “worthy” or “noble” so they could ranked them reason, using factors outside pleasure itself.  Epicurus rejected that whole approach, and evaluated pleasure only by pleasure itself, entirely and solely by the context of the person experiencing it.  See PD10. If the things that produce the pleasures of profligate men really freed them from fears of the mind concerning celestial and atmospheric phenomena, the fear of death, and the fear of pain; if, further, they taught them to limit their desires, we should never have any fault to find with such persons, for they would then be filled with pleasures from every source and would never have pain of body or mind, which is what is bad.

So when you consider the question asked in the graphic associated with this post, your answer says much more about your personal definition of “happiness” than it does about the people in the graphic.  Under the model that Lucretius refers to in the opening of book six, that of a vessel which is leaky and full of holes and therefore cannot be filled with pleasure, it seems to me that the proper way to evaluate any question such as this is to examine the person involved and look closely at their circumstances.  Each person’s “vessel,” as well as their “pleasures,” meaning the activities that they find pleasing, are going to be – within rules and limits set by nature – different.  In Epicurean terms, it is improper to think that the pleasure of playing dice in fourteenth century England is in any way “inferior” to the pleasures of using an I-pad today.  Using an I-pad may lead to greater wisdom and knowledge, and thereby to greater safety and health in many ways, but such a result is still to be measured in terms of “pleasure.”  The wisdom and knowledge brought by I-pads is, just like every other tool of living, only worthwhile and instrumental to the extent that it leads to other and greater pleasures.

If a person’s circumstances are such that they find pleasure in friendship and family and the things that are possible in fourteenth century England, and they have succeeded in excluding most or all significant pains from their life, then such a person may well be living the Epicurean ideal of a life full of pleasure with minimal or no pain.  If a person’s circumstances are such that they are plagued with existential doubts about religion, politics, and the “meaning of life,” then even if such a person lives in a world filled with I-phones and I-pads and all the health care and technology that the modern world can provide, then they may well be miserable and living far less well than someone in the fourteenth century.  It is absolutely Stoic, Aristotelian, and wrong to assert that there is an absolute standard of pleasurable living – some eternal pattern of pleasure in another dimension – by which we should attempt to judge people and fit them like pegs into square or round holes.

Once people see the issue they can make their own decision, but the insight of Epicurus – maybe one of his most important – is that pleasure is something that is not to be measured by abstract reasoning.  The issue is the same as stated by Diogenes of Oinoanda, and calls for the same emphasis:

If, gentlemen, the point at issue between these people and us involved inquiry into «what is the means of happiness?» and they wanted to say «the virtues» (which would actually be true), it would be unnecessary to take any other step than to agree with them about this, without more ado. But since, as I say, the issue is not «what is the means of happiness?» but «what is happiness and what is the ultimate goal of our nature?», I say both now and always, shouting out loudly to all Greeks and non-Greeks, that pleasure is the end of the best mode of life, while the virtues, which are inopportunely messed about by these people (being transferred from the place of the means to that of the end), are in no way an end, but the means to the end.