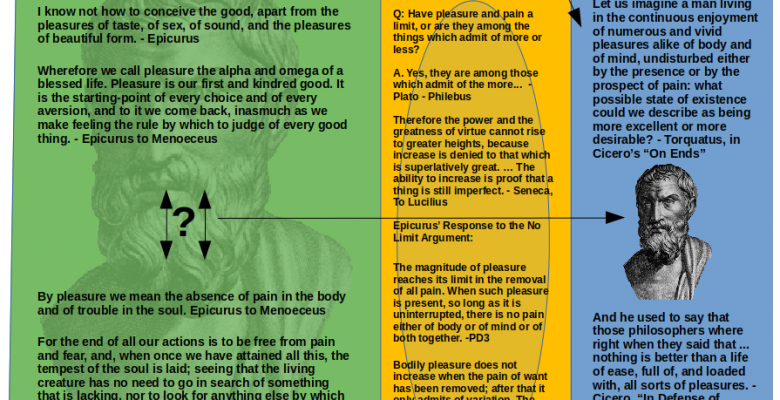 In most “enlightened” circles today it is accepted and even required correctness to teach that the universe is not controlled by meddling gods, and that it is foolish to look for a life after death. Thus far Epicurus enters into polite company with flying colors, and he is praised as a genius beyond his time. But what of the Epicurus who said that he “knew not how to conceive the good apart from the pleasures of taste, of sex, of sound, and the pleasures of beautiful form?”

This pleasure-centered viewpoint is most certainly not accepted by the enlightened orthodoxy, who hold simplicity and austerity as ends in themselves, and as the watchwords of enlightenment.

And so we come to the third of the Principal Doctrines: “The limit of quantity in pleasures is the removal of all that is painful. Wherever pleasure is present, as long as it is there, there is neither pain of body nor of mind, nor of both at once.” This is interpreted by the enlightened orthodoxy as a call to simplicity and asceticism, rather than to pleasure as the guide of life. The orthodoxy cares not that this upends both the doctrine and the philosophy as a whole, because orthodoxy is essentially Platonic and Stoic, and looks for that which it finds most amenable to its own views.

From here I will quote Norman DeWitt, the unorthodox interpreter of Epicurus who has been banished from academic respectability for his willingness to embrace this most controversial of the doctrines of Epicurus:

“Having established body and soul upon a parity, equal partners in life, Epicurus next proceeded to propound a number of paradoxes: first, that limits of pleasure were set by Nature, beyond which no increase was possible; second, that pleasure was one and not many; and third, that continuous pleasure was possible. These new doctrines were the offspring of controversy, because the contrary doctrines had been sponsored by Plato and his followers, who in this instance agreed for the most part with the multitude.”

“The first paradox is part of Authorized Doctrine 3, and by this position its prime importance is revealed: “The removal of all pain is the limit of the magnitude of pleasures:’ The meaning is plain if the pleasure of eating be taken as an example. Nature is the teacher, as usual, and sets the norm. Hunger is a desire of the first category according to Epicurus: it is both natural and necessary. Where this natural and necessary desire for food exists, the pleasure of satisfying it cannot be exceeded….”

“To the youthful Menoeceus Epicurus writes: ‘Plain-tasting foods bring a pleasure equal to that of luxurious diet when once the pain arising from need has been removed. and bread and water afford the very keenest pleasure when one in need of them brings them to his lips.’ This is the fixed ceiling for pleasure. which he endeavors to establish in opposition to Plato. who compared the appetitive part of the soul to “a many-headed beast” and held to the opinion that desires increase endlessly and that pleasure defied the fixing of a limit. …”

“In [the letter to Menoecues] the doctrine of the basic pleasures and the consequent fullness of pleasure is elaborated: “It is for this that we do everything, to be free from pain and fear, and when we succeed in this, all the tempest of the soul is stilled, the creature feeling no need to go farther as to something lacking and to seek something else by which the good of soul and body shall be made perfect.” In speaking of “going farther” and “seeking something more” he refers to the superfluous or merely embellishing pleasures.”

(All quotes above from Chapter 12, “The New Hedonism” – Epicurus and His Philosophy by Norman DeWitt)

In closing, consider also Vatican Saying 63: “There is also a limit in simple living, and he who fails to understand this falls into an error as great as that of the man who gives way to extravagance.” 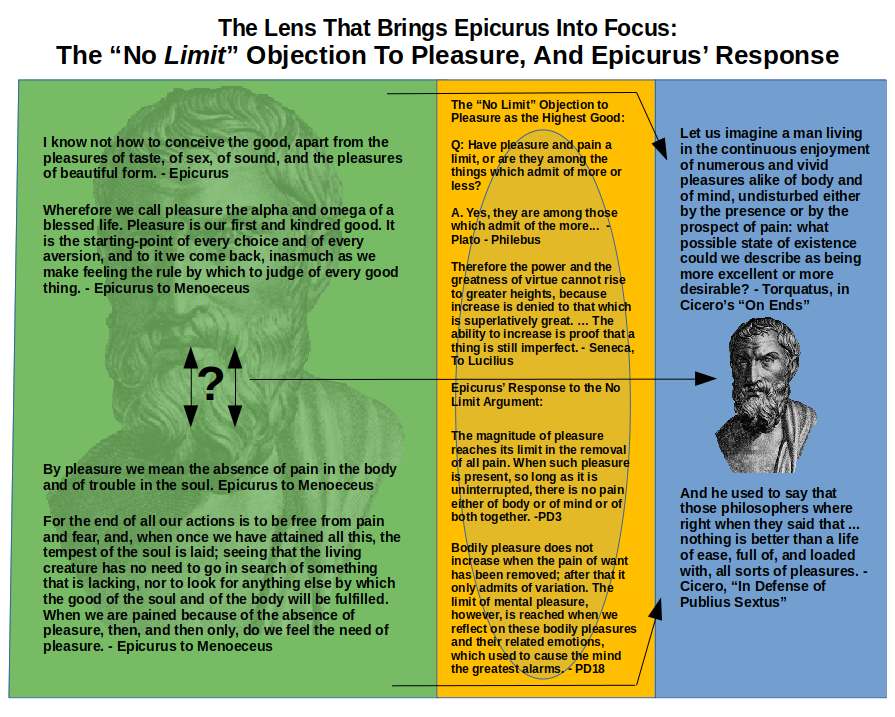 The full gallery of PD3 graphics is here: https://www.epicureanfriends.c…egory-image-list/190-pd3/

Previous ArticlePrincipal Doctrine Two – Death Is Nothing To Us
Next ArticleThree Great Epicurean News Items From Michele Pinto In Italy!