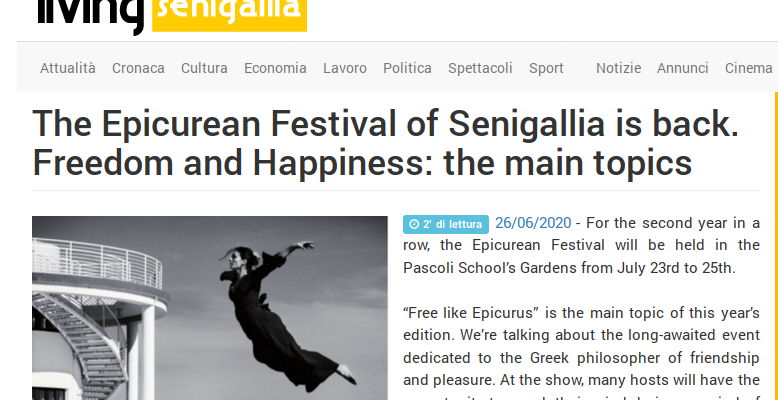 Thanks to Michele Pinto for the following:

The event will take place in Senigallia from 23rd to 25th July 2020. Three days during which writers, youtubers, academic professors, singers-songwriters and artists will perform on stage to spread, to live and to actualize the message of freedom and happiness theorized by Epicurus.

During the Festival, the winners of the award will present their theses to the audience.  Announcement of the winners is below.

As part of the festival there will be recognition of winners in the latest Epicurean thesis competition, including presentation by the authors:

Two theses on the current relevance of Epicurean thought in a draw for the NetoIP award.

Friendship, politics and the ability of summarizing philosophical theories in order to make them accessible to everybody are the topics discussed in the two winning theses of the first NetoIP award for the best degree and PhD theses on Epicurus.

Among all the theses presented, the chairman of the jury, Professor Roberto Radice, has decided to reward those presented by graduate Tiziana di Fabio and graduate Vincenzo Damiani.

Tiziana di Fabio, with her thesis titled “Giustizia e philia: Politica e filosofia nell’ Epicureismo greco” (“Justice and Philia: Politics and Philosophy in Greek Epicureanism”) has demonstrated how the famous Epicurean quote “live hidden” was never a total ban towards the devotion to politics, retracing the steps of many philosophers belonging to the Epicurean tradition who had a voice, some even remarkable, in the administration of greek poleis.

Vincenzo Damiani has examined the literary genre known as compendium or epitome, which was extremely important for Epicurus. The need for this format appeared to Epicurus when he realized that philosophy should be made comprehensible and easy to be memorized by every category of people who wish to reach happiness in concrete terms, both those who were near and far from the Athens Garden.

“We chose two theses, professor Radice explains, but all of them were of a very high-level competence, taking into account of all the technical and communicative aspects.”

Both theses will be awarded by Giacomo Di Napoli, CEO of NetolP, during the event “Liberi come Epicuro, secondo festival epicureo” (“Free like Epicurus, the second Epicurean festival”) organized by the online newspaper Vivere Senigallia from 23rd to 25th July 2020. To the winners Di Napoli will hand over a NetolP phone card as well as the 1.500€ prize to be split between them.

“I love to think and to believe that our work,” Di Napoli explains, “makes possible what has been written and described in the winning theses. What would the philia be like, what would the friendship described by Tiziana di Fabio in her thesis be like, without a good remote talk? All of us know how important the web is for distant teaching. I’m looking forward to meeting the winners in Senigallia during the Epicurean Festival”.

“It’s really appreciated when a local newspaper like Vivere Senigallia puts itself at the service of the city and decides to organize a festival,” Marco Giovanelli, the president of ANSO (Associazione Nazionale Stampa Online – National Association Online Press, sponsor of the initiative) explains. “What we need for a re-start is the capacity to make people discover the world of culture, enterprises and communication”.

“The lesson of Epicurus is valid and contemporary still today,” says Michele Pinto, president of the Associazione Culturale il Mondo di Epicuro (Cultural Association the World of Epicurus) and director of Vivere Senigallia. “That’s the reason why we are so thankful to those whom, by unrolling an ancient papyrus or by doing an academic research, are able to give us back the thought of Epicurus which becomes more and more authentic. Our Festival is the continuation of their work, and we enjoy ourselves in bringing up to date and in making more available an ancient treasure of hope and happiness.”

NetoIP was born in Ancona in 2009. Today, in 2020, it is still fully active. It is expanding itself with services dedicated to fixed and mobile telephony, with a widespread presence in the regions of Marche, Sicilia, Calabria and Toscana, in high-level quality partnership with Lombardia, Piemonte and Sardegna.Some figures? The company is the owner of 42 jig of dedicated Internet broadband, thanks to the investments and to the new contacts, it has reached the 97% of coverage of the national territory, it has touched 5 thousand clients, it owns 14 employees and 15 collaborators and it is growing fast, thanks also to the new projects of development which will place the company by the side of a partner in the field of energy and by the side of another partner in the sport field, a sector in which, after all, the company is active with important sponsorships: the Cus Ancona 5-a-side football and the Accademia volley Ancona. In order to grow even more in the international market, NetolP looks at the Spanish market, where the company is currently active with the participation in the society NetolP Network SL, based in Tenerife.

ANSO was set up in 2003 by a group of editors pioneers of online information. Today ANSO involves 155 headlines and 80 publishers. It reaches 22.000.000 readers each month, the readers visualize 90 million pages. The newspapers ANSO publish 2.900 articles each day. Today ANSO is a bastion in the defense for the liberty of the press in Italy and Europe.