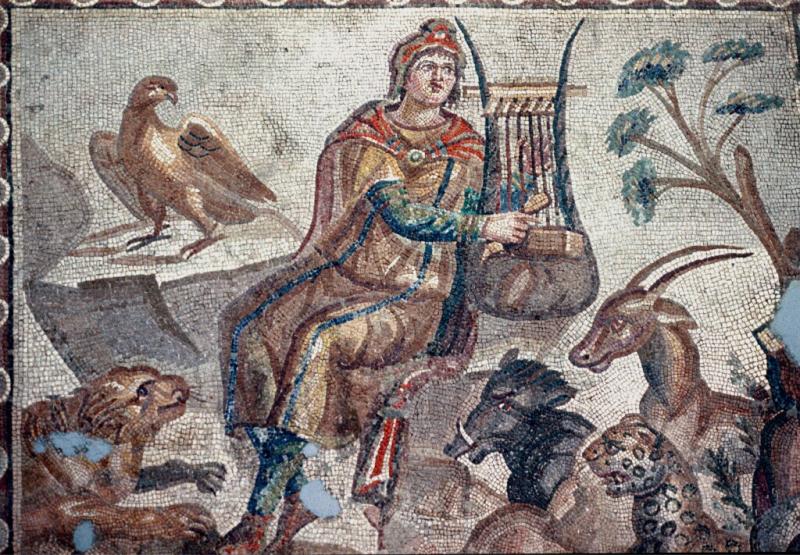 One of the more important proponents of Epicureanism in the ancient world, whose efforts are known but little remembered today, was Philonides of Laodicea.  Philonides was an Epicurean philosopher based in  Antioch some 150 years before Christ.   Here is his entry in Wikipedia:

Philonides (c. 200 – c. 130 BCE) of Laodicea in Syria, was an Epicurean philosopher and mathematician who lived in the Seleucid court during the reigns of Antiochus IV Epiphanes and Demetrius I Soter.  He is known principally from a Life of Philonides which was discovered among the charred papyrus scrolls at the Villa of the Papyri at Herculaneum.[1] Philonides was born into a family with good connections with the Seleucid court.[2] He is said to have been taught by one Eudemus, and Dionysodorus the mathematician.[3] Philonides attempted to convert Antiochus IV Epiphanes to Epicureanism, and later instructed his nephew Demetrius I Soter in philosophy.[2] Philonides was highly honoured in the court, and he is also known from various stone inscriptions.[4] He was renowned as a mathematician, and is mentioned by Apollonius of Perga in the preface to the second book of his Conics.[3][5] Philonides was a zealous collector of the works of Epicurus and his colleagues, and is said to have published over 100 treatises, probably compilations of the works he collected

And here is a more expanded description from Chapter 15 of Norman DeWitt’s Epicurus and His Philosophy:

“The Epicurean school in Antioch is remarkable not only for its strategic importance but also for the fact that its existence is known only from a papyrus. By way of introduction to the story, however, certain warnings are in order, as happens so often in the history of Epicureanism. In spite of the fact that Epicurus seems to have recommended especially the method of extension from disciple to disciple for the propagation of his doctrine, it is quite usual to find his adherents among the teachers of grammar, rhetoric, and even mathematics. The prejudice of the founder against these branches has been greatly exaggerated, especially among modern scholars. Epicurus himself had been a privileged person, enjoying the endowments of generous friends, especially Idomeneus. The sordid necessity of earning a living was more often the lot of his later devotees. They taught their philosophy along with accepted subjects of study.  If this judgment is rendered more credible by examples, the names of Epicureans who essayed to teach grammar or rhetoric in Rome may be found in Suetonius,27 while it is clear that men like Arnobius, Lactantius, and St. Augustine acquired their knowledge of the creed along with rhetoric.

It is in the light of such knowledge that we should read of the distinguished philosopher Philonides, who set up his headquarters in Antioch and surrounded himself with “a throng of scholars.” He made a convert of Antiochus Epiphanes (d. 164 B.c.) and enjoyed not only his patronage but also that of his successor, Demetrius Soter. It was manifestly the ambition of Philonides to make Antioch a capital of Epicureanism. He utilized his privileged position to assemble all the writings of Epicurus for the royal library. Like other leaders of the sect, he was busy with his pen, published 125 books, and rearranged the letters of Epicurus and his three colleagues according to names and subject matter.

That Philonides was also a man of force and persuasion is demonstrated not only by his influence over two monarchs but also by his services as a diplomat. His ability as an administrator was recognized by his appointment in charge of Laodicea on the Sea.

The unique interest that attaches to this school in Antioch is enhanced by other reasons, particularly two: it is probable that it served as a base of operations for the forcible introduction of Epicureanism into Judaea, and it was in this city that, according to Luke, the followers of Jesus were first called Christians. Attention should be drawn to the fact that the word Christian is a Latin and not a Greek formation. Since adherents of the older sect were already known by the name of their founder, it was natural for Roman residents, whether merchants or officials, to designate the adherents of the new sect in a similar way. To these neutral observers, when they heard of Epicureans ridiculing Christian prophecies and the Christians fighting back, the contenders would have been no more than two warring factions. It was manifestly the resident Romans who coined the word Christian.

As for Antiochus himself, his very name was loathsome to the Jews, because his adopted surname Epiphanes means “the god manifest.” He also waged vindictive warfare against them and attempted to force Greek culture upon them and, since Epicureanism was the court philosophy, there can be little doubt that this was part of his program. It is on record that a gymnasium was built in Jerusalem,29 abhorrent to the orthodox Jew not only as an alien institution but specifically because of nudity in sports and the threat of sodomite practices associated with it. It signified also the virtual licensing of public teachers free of priestly control. That some progress was made in this direction is evidenced by the word Ecclesiastes, which means public teacher. Moreover, the book that goes under this name is abundantly sprinkled with atoms of Epicureanism; it was squeezed into the canon only by drastic and incongruous editing.

It derives its startling literary quality from the combination of luminous Hebraic imagery with the stark materialism of Epicurus. Consider, for example, the following, 9:4-5: “A living dog is better than a dead lion, for the living know that they shall die but the dead know not anything.” Here we see transposed into the Hebraic idiom of thought the doctrine of the Garden that the most precious of all things is life itself and “that death is nothing to us”; it is anesthesia. The opinion has been expressed that the author was a Jewish physician of the time of Antiochus Epiphanes

The hatred of the orthodox Jew for the heretical teaching is on record to this day in the rabbinical term apikoros, “unbeliever.” Jewish students were exhorted “to study the Law and know how to make answer to an unbeliever [lit. “Epicurean”].”

It may be added that, even apart from attempts at cultural regimentation, an opening had been afforded for the infiltration of Epicurean doctrines among the Jews by the division between Pharisees and Sadducees. The beliefs of the latter, as recorded by Josephus,32 including the denial of divine providence and the assertion of free will, exhibit an unmistakable coincidence with the teachings of Epicurus. This coincidence is the more noticeable because the reluctance of the Sadducees to hold public office is likewise mentioned. That Epicurus was in the mind of Josephus when penning his account of this sect, even if not mentioned by name, becomes the more probable when it is recalled that his defense of the prophet Daniel concludes with a spirited and extended diatribe against Epicurus and his views on the government of the universe.  On this occasion the arch-heretic is specifically named.”

Note:  The illustration for this post came from the page of Dick Osseman here where there are many outstanding photos of Roman-era mosaics from Antioch.

Previous ArticlePeace, Safety, And Good News For your Twentieth of March – The Translation of Lucretius You Want For Your Library Is Now In EPUB!
Next ArticleAnnouncement of New “Epicurean Philosophy” Facebook Group