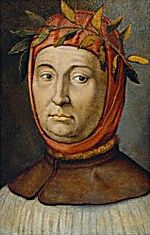 In the Cambridge book that contains the Cosma Raimondi letter cited here several days ago, there is the following paragraph, which is part of an introduction of a brief passage from Petrarch:

“The main interest of the text translated here resides in the fact that it is the first defense of Epicurus written by a Renaissance author. Petrarch was far from an enthusiastic supporter of Epicurus, regarding with contempt his belief that pleasure was the highest good and condemning the subordination of virtue to pleasure which this entailed. Yet Petrarch, as a careful and sensitive reader of Seneca, recognized that many of the statements of Epicurus quoted by the Roman Stoic were of considerable ethical value and not without relevance to his own moral struggles — no matter who had originally spoken them. Petrarch even devised ways of adapting Epicurus’s maxirns to a Christian context. In this way, he initiated the trend — later developed by Lorenzo Valla, Francesco Filelfo, Erasmus and Francisco de Quevedo — of transforming Epicureanism into a philosophy which was broadly compatible with Christianity.”

My comment on this is that it should not be surprising if many people today are confused about the differences between Epicurean philosophy and Stoicism and even Christianity. Other than a very few exceptions, such as Frances Wright and Norman Dewitt, almost all of us have been taught about Epicurus by commentators who for a thousand years have been trying to blur distinctions, and to make Epicurus seem to say what they would like for him to have said, rather than what he meant. In many cases the views they try to sell us are views Epicurus would loathe to be associated with, and ancient Epicureans fought as hard as they could. The simple truth is that Epicurean philosophy is NOT “broadly compatible” with either Stoicism or Christianity or the establishment ethics that have long ruled the world. This is something that Lucian was well aware of when he wrote the following in “Alexander the Oracle Monger”:

“The prosperity of the oracle is perhaps not so wonderful, when one learns what sensible, intelligent questions were in fashion with its votaries. Well, it was war to the knife between him and Epicurus, and no wonder. What fitter enemy for a charlatan who patronized miracles and hated truth, than the thinker who had grasped the nature of things and was in solitary possession of that truth? As for the Platonists, Stoics, Pythagoreans, they were his good friends; he had no quarrel with them. But the unmitigated Epicurus, as he used to call him, could not but be hateful to him, treating all such pretensions as absurd and puerile.”

Also, here’s one more significant passage from the Cambridge book, this one from a letter by Francesco Filelfo. He’s making a point that ought to be obvious, but we hear so much criticism of Epicurus that it pays to make sure we are absolutely clear: “Pleasure” is not something only of “the body” – it is also of “the mind.” When we say that Pleasure is the goal of life, we are not *solely* referring to good food and drink! Here is how Filelfo stated it in the year 1428:

“There are, however, people who insinuate that pleasure is only related to the body and that it is also a shameful thing; as if, when we say, ‘Your letter gave me extraordinary pleasure‘, we were to mean by this that it was not our mind that was filled with joy, but our body -— and shamefully, to boot. Let us firmly reject all these perverse explanations, for pleasure is related both to the mind and to the body. Nor does the word voluptas [pleasure] have any other meaning in Latin than hedone in Greek. Hédone, too, is experienced both by the mind and by the body; and it can be respectable or disgraceful according to the degree of thoughtfulness or thoughtlessness involved. Moreover, Aristotle ranks pleasure, just like prudence and virtue,
among the goods of the mind. Besides, I do not think that the objections raised against Epicurus are well-founded. It is said that he was addicted to pleasure, lewd and lascivious, whereas it is an established fact that he was sober, learned and venerable.”

Note: The cite to the Cosma Raimondi letter refers to this link  :https://www.facebook.com/groups/EpicureanPhilosophy/permalink/764261280289501/

Previous ArticlePeace and Safety For Your Twentieth of December: Follow the Evidence to Happiness and Health
Next ArticleToward A Better Understanding Of Epicurus: Eight Areas Of Focus For 2015