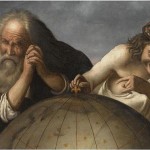 I’ll have to quibble with Johannes Moreelse‘s depiction of Democritus (he seems to me to look more impish than simply laughing) but otherwise this early 1600’s painting is a brilliant contrast between Heraclitus (the weeping philosopher) and Democritus (the laughing philosopher).

For a better portrayal of Democritus, check here (apparently a self-portrait of Rembrandt, but entitled The Young Rembrandt as Democritus the Laughing Philosopher (1628-1629)).

In this context we can recall what Lucretius recorded about Heraclitus (Bailey translation, Book I):

Wherefore those who have thought that fire is the substance of things, and that the whole sum is composed of fire alone, are seen to fall very far from true reasoning. Heraclitus is their leader who first enters the fray, of bright fame for his dark sayings, yet rather among the empty-headed than among the Greeks of weight, who seek after the truth. For fools laud and love all things more which they can descry hidden beneath twisted sayings, and they set up for true what can tickle the ear with a pretty sound and is tricked out with a smart ring.

Of course in Diogenes Laertius it is recorded that “Heraclitus he [Epicurus] called ‘The Muddler.’”

And don’t deceive yourself into thinking this is all ancient history.  One of the most influential German philosophers of recent centuries, G.W.F. Hegel, was profoundly influenced by Heraclitus.  According to Wikipedia,  Hegel asserted that in Heraclitus he had an antecedent for his logic: “… there is no proposition of Heraclitus which I have not adopted in my logic.”  Further, “[a]ccording to Hegel, Heraclitus’s “obscurity” comes from his being a true (in Hegel’s terms “speculative”) philosopher who grasped the ultimate philosophical truth and therefore expressed himself in a way that goes beyond the abstract and limited nature of common sense and is difficult to grasp by those who operate within common sense.”

And to complete the contrast, remember this from Epicurus:

VS41.  “At one and the same time we must philosophize, laugh, and manage our household and other business, while never ceasing to proclaim the words of true philosophy.”

I don’t know about you, but I choose to follow the laughing philosophers!

Previous ArticleAnnouncing the Launching of “AFewDaysInAthens.com”
Next ArticlePeace and Safety For Your Twentieth of January!