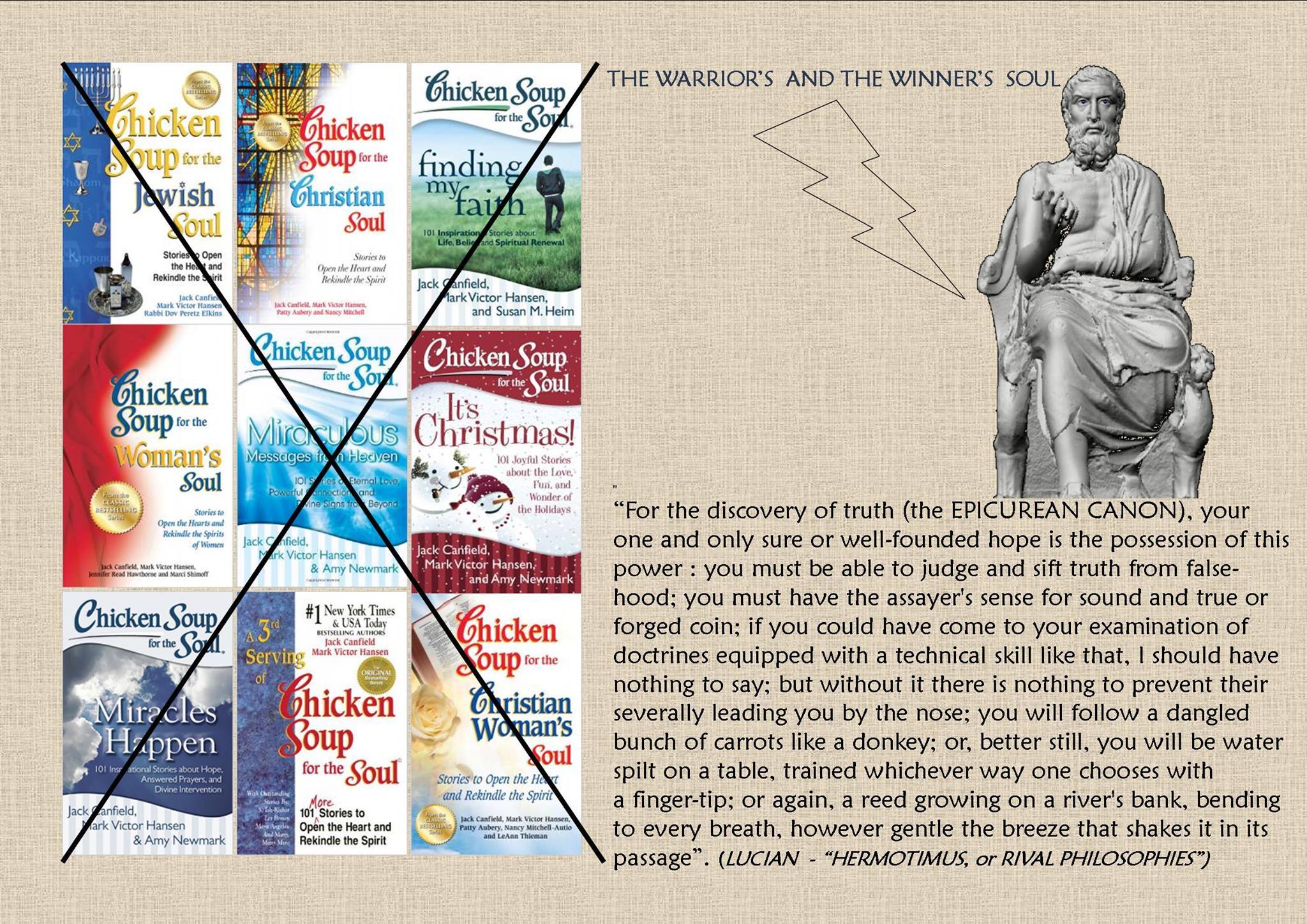 [For those readers of this blog who do not read the “Epicurean Philosophy Facebook Group,” here is a post of special interest, in slightly modified form, that originated there.  It is not the intent of this post to slam the “Chicken Soup for the Soul” series of books in particular – they are used here only as an example of how to contrast modern “pop” psychology with the philosophy of Epicurus.]

The attached graphic by Elli deserves a post of its own so more people see it. We have had a discussion today about excerpts from the “Chicken Soup for the Soul” series of books that highlights something very important. Epicurus devoted his life to studying nature, other philosophies, and other religions, and from them he took the information from which he shaped his own views. Epicurus encouraged as much observation as possible, and it helps us to do the same.

But there is a hugely important distinction between what Epicurus did and what people think about in being “eclectic.” People today tend to think of themselves as bees flitting from one flower to another, drinking nectar at every stop. And they tend to think the the trip from flower to flower is the point of it all – to gather new experiences like pearls on a necklace.

One of many problems with that analogy, however, is that people are not bees. Bees know what they are looking for; they are programmed firmly by nature to know what is pleasurable to them, and to avoid what is painful. They are not constantly distracted with questions about their basic purpose in life. They do not ask themselves “Should I buzz to the next flower, or should I take a vacation on the beach?” They do not have legions of philosophy bees telling them that life is meaningless, or legions of religious bees telling them that they should look to god to tell them which flowers to choose.

Epicurus cut through the haze of false philosophy and religion by looking straight to Nature for his guide. He knew of the corrupting influence of cultures, religions, and philosophies, so he looked to the source where he could find men free from those corruptions. Epicurus looked to newborn child, who lives free and prior to any influence of any corruption, and he looked to see what Nature led infants to seek and what to avoid before they could be taught self-destruction.

At the same time, Epicurus looked to Nature to understand the basics of how the world works. He saw that nothing comes from nothing, and nothing goes to nothing. And so from this he saw that the universe as a whole has existed eternally. He saw that things constantly change, but within fixed patterns, and so he knew that there was some basic fundamental particle which did not change, and by which the patterns of nature are preserved.

Epicurus looked and saw that children have some degree of control over their lives. From this he saw that the elemental particles must possess the power to swerve, and thus men have the power to break through past the chains of determinism that would otherwise bind them as robots.

He looked and saw the message of philosophers and religions who preached that knowledge is not possible, but who expected their listeners to accept this nonsense as knowledge. And so he explored the laws of nature and developed his understanding of the faculties of knowledge that Nature gave us, which he then taught to his students as the canon of truth.

Never along the way did Epicurus collect information “randomly.” Never did he decide to include something in his philosophy arbitrarily. Epicurus saw that it was worse than useless to think that a man can substitute his opinion of the goal of life in place of the wisdom of nature. He saw that labeling something as “the best” or as “virtuous” or as “good” means nothing unless you define the standard by which you are assigning these labels.

So that is why eclecticism — looking for “the best” wherever we think we can find it — is the opposite of the Epicurean viewpoint. Epicurus did not have the arrogance or effrontery to tell people that he knew better than nature, nor did he tolerate those who do. Epicurus labeled Platonists as “golden” and “toadies of Dionysius.” He labeled Aristotle as a “profligate, who after devouring his patrimony took to soldiering and selling drugs.”

Epicurus did not call people names for no reason. He wanted his students to understand that not all philosophies are created equal, and not all fountains contain truth.

As Elli quotes Lucian so well in this graphic, our task is to gain and keep the power of judging and sifting truth from falsehood:

“…[Y]ou must have the assayer’s sense for sound and true or forged coin; if you could have come to your examination of doctrines equipped with a technical skill like that, I should have nothing to say; but without it there is nothing to prevent their severally leading you by the nose; you will follow a dangled bunch of carrots like a donkey; or, better still, you will be water spilt on a table, trained whichever way one chooses with a finger-tip; or again, a reed growing on a river’s bank, bending to every breath, however gentle the breeze that shakes it in its passage.”

There is much to learn from other people, and we need to study especially those philosophies and religions which have the most impact in our personal circumstances. But the goal is not to be a bee, or like water on a table or reeds in the wind. Our goal is to live happily because Nature directs us to that goal. To follow Nature, we must learn what paths lead to happiness and which lead to disaster. Once we learn those paths, we don’t merrily resume flitting from flower to flower. We expand our knowledge and understanding of the correct paths. We assist our friends in the same goal. And while we live we follow this advice from Epicurus:

VS41. At one and the same time we must philosophize, laugh, and manage our household and other business, while never ceasing to proclaim the words of true philosophy.