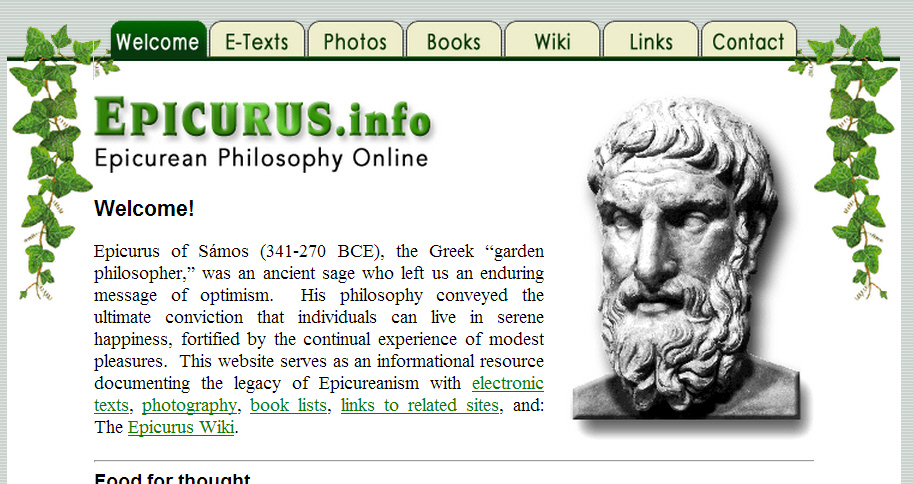 This is just a short post to remind fans of Epicurus that there are two great resources at Epicurus.info (among many others) that don’t get the attention they deserve.  One is the lengthy collection of references to Epicurus collected by Hermann Usener, and the other is the “fragments” collected by Cyril Bailey.

Due to the fragmentary nature of the texts that are left to us, it is sometimes necessary to look to one of these statements, for which we no longer have the original context, for important aspects of doctrine.  One of the most important of these is the following fragment which appears to be a direct statement to address the meaning of “the good” as it is used in philosophical discussion:

That which creates insuperable joy is the complete removal of a great evil. And this is the nature of good, if one can once grasp it rightly and then hold by it, rather than walking about tediously babbling about the good.

Plutarch, That Epicurus actually makes a pleasant life impossible, 7, p. 1091A: Not only is the basis that they assume for the pleasurable life untrustworthy and insecure, it is quite trivial and paltry as well, inasmuch as their “thing delighted” – their good – is an escape from ills, and they say that they can conceive of no other, and indeed that our nature has no place at all in which to put its good except the place left when its evil is expelled. … Epicurus too makes a similar statement to the effect that the good is a thing that arises out of your very escape from evil and from your memory and reflection and gratitude that this has happened to you. His words are these: “That which produces a jubilation unsurpassed is the nature of good, if you apply your mind rightly and then stand firm and do not stroll about {a jibe at the Peripatetics}, prating meaninglessly about the good.”

Dewitt comments on this passage as follows:

As a criterion the Feelings may take precedence over reason. Plato, for example, argued endlessly about the meaning of “good.” Epicurus scorned this dialectic and arrived at a simple solution. His line of attack is as follows: the greatest good must be associated with the greatest pleasure. This greatest pleasure is easily identified: “What causes the unsurpassable joy is the bare escape from some terrible calamity.”  This joy arises from the saving of life, the escape from shipwreck, for instance. Therefore life itself is the greatest good. To think of pleasure as the greatest good is an error; pleasure is the telos and is not to be confused with the greatest good. The testimony of the Feeling functioning as a criterion is decisive. More will be said of this in the chapter on the New Hedonism.

The specific teaching that life itself is the greatest good is to be drawn from Vatican Saying 42: “The same span of time includes both beginning and termination of the greatest good.” If this seems to be a dark saying, the obscurity is dispelled by viewing it as merely a denial of belief in either pre-existence or the afterlife. As Horace wrote, concluding Epistle i.16 with stinging abruptness, “Death is the tape-line that ends the race of life.” Editors, however, misled by the summum bonum fallacy, equate “the greatest good” with pleasure and so are forced to emend. The change of a single letter does the trick but fundamental teaching is obliterated.1

While this quoted statement is first-hand evidence of the Epicurean attitude, the syllogistic approach is also known from an extant text, of which the significance has been overlooked. The major premise is the assumption that the greatest good must be associated with the most powerful emotions, that is, the worst of all fears and the greatest of all joys. Now the worst of all fears is that of a violent death and the greatest of all joys is escape from the same. The supporting text runs as follows: “That which occasions unsurpassable joy is the bare escape from some dreadful calamity; and this is the nature of ‘good,’ if one apprehend it rightly and then stand by his finding, and not go on walking round and round and harping uselessly on the meaning of ‘good’.”  This passage marks the summary cutting of a Gordian knot, the meaning of “good,” upon which Plato had harped so tediously. Epicurus finds a quick solution by appealing to the Feelings, that is to Nature, as the criterion; it is their verdict that the supreme good is life itself, because the strongest emotions are occasioned by the threat of losing it or the prospect of saving it.

Previous ArticleObjectivism: The “Worst and Most Dangerous” Philosophy In America
Next ArticleFrances Wright on Epicurean Virtue vs. “Virtue” In The Other Philosophies