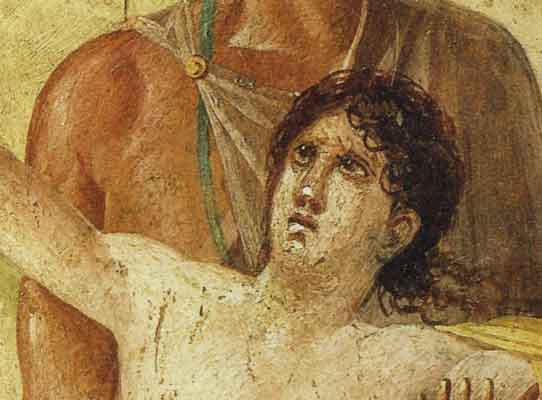 Readers of this blog know that I post comments on my reading as I study.  Today I have an excerpt from R.D. Hicks’ “Stoics And Epicureans” that I think illustrates one of the bigger problems people have in understanding the Epicurean view of pleasure.

Hicks was, of course, a recognized expert and translator of many ancient texts, including Diogenes Laertius.  His scholarship far exceeds anything I can aspire to.  And yet I think that when one digests so much raw material about ancient philosophy, it is tempting to let the dominant strain one has studied color one’s interpretation of the dissenting strain.  That is what I think Hicks and the mainstream academics do with Epicurus, and I think the passage below illustrates this well.

At the point in the book where this passage appears, Hicks has already given a lengthy commentary on Stoicism and its views of pleasure and “the good.”  He then proceeds to Epicurus, but in evaluates him mainly in Stoic terms that leave a false impression.  Let me ask a few questions before proceeding to the excerpt:

1)  What would you say is the “ideal” for Epicurus?  Would it not be the ideal man described in the Torquatus speech by Cicero?  Let’s recall that first, because it illustrates the Epicurean goal which Nature sets out before us:  “Let us imagine a man living in the continuous enjoyment of numerous and vivid pleasures alike of body and of mind, undisturbed either by the presence or by the prospect of pain: what possible state of existence could we describe as being more excellent or more desirable? One so situated must possess in the first place a strength of mind that is proof against all fear of death or of pain; he will know that death means complete unconsciousness, and that pain is generally light if long and short if strong, so that its intensity is compensated by brief duration and its continuance by diminishing severity. Let such a man moreover have no dread of any supernatural power; let him never suffer the pleasures of the past to fade away, but constantly renew their enjoyment in recollection, and his lot will be one which will not admit of further improvement.”  Ok, that’s what I see as the “ideal existence” for an Epicurean.  Remember that when Hicks concludes:  “To be independent of circumstances is his ideal; that a man should find his true good in himself.”  This can be twisted and turned into a true observation if one works at it, but one should not have to work so hard.  Yes, independence can be good, but it is not always a good (many of our most joyful experiences come through friends), nor is independence  itself the goal of life, any more than frugality is the goal of life.  The goal of all these, which are mere tools toward the goal, is living pleasurably.

2) And think further about Torquatus’ ideal man, who lives “in continuous enjoyment of numerous and vivid pleasures alike of body and of mind, undisturbed either by the presence or prospect of pain.”  Is not the focus there on the positive experience of enjoying those numerous and vivid pleasures of body and mind?  Remember that when Hicks concludes that ” positive pleasure … is itself a mental disturbance.” And remember it when Hicks likewise concludes that the “natural end and aim [is] a state which is neither want nor desire nor the pleasurable excitement of satisfying want.”  Such a conclusion could make sense only to someone steeped in the word-games of Stoicism or the Academics.  It is a twisting and turning to fit a Stoic model of apathy and indifference, and it is a manner of approaching the subject that breeds nothing but confusion.

3)  Hicks then pursues his vision of equating Epicurean pleasure with Buddhism.  I do not know whether this is fair to Buddhism or not, but  it is not fair to Epicureanism.   Hicks cites the metaphor of the agitated sea, setting up the sea swept by storms or tempests as bad, and the sea in gentle motion as good.  In so doing, he misses the main context, which is (to follow his metaphor) that the sea passes its existence in unbroken fidelity to its nature, a huge powerful strong entity that endures, true to itself, regardless of whether it is stirred temporarily by pain or anger.   In the case of men and living things, Epicurus recognizes that Nature has set up pleasure (not endurance) as the goal and therefore the guide to life.  Hicks and the Stoics/Academics would relegate pleasure, along with pain, to the role of distracting sidelights in their pursuit of the mirage of “virtue.”

Such is the kind of conclusion one reaches when one falls for the lure of “virtue” as the standard and goal of life.  Here now is Hicks (from page 166), and this is the argument I suggest needs to be understood and dismissed as erroneous.

We now get a clearer notion of the end of action, which turns out to be the maximum of pleasure to the agent after subtraction of whatever pain is involved in securing the pleasure or directly attends upon it. At this point Epicurus parts company with Aristippus, whose crude presentation of hedonistic doctrine identified the end with the pleasure of the moment. So soon as conditions and consequences are taken into account, pleasure tends to become an ideal element capable of being realized in a series of action, or in the whole of life, but not to be exhausted at any given point of the series. More important, however, for determining the exact significance of this conception is the incursion which Epicurus makes into the psychology of desire.

Desire is prompted by want; unsatisfied want is painful. When we act in order to gratify our desires, we are seeking to remove the pain of want, but the cessation of the want brings a cessation of mental trouble or unrest, and this must carefully be distinguished from positive pleasure, which is itself a mental disturbance. Experience shows a succession of mental disturbances, painful wants, the effort to remove them, and the pleasurable excitement which attends their removal. But all this shifting train has for its natural end and aim a state which is neither want nor desire nor the pleasurable excitement of satisfying want. All of them are fugitive states as contrasted with the resultant peace and serenity in which they end. The former are compared to an agitated sea, whether swept by storms or tempests or in gentle, equable motion, the latter to the profound calm, waveless and noiseless, of a sheltered haven.

Beyond this neutral state of freedom from bodily pain and mental disturbance it is impossible to advance. We may seek new pleasures by gratifying new desires; we are only returning to the old round of painful want, desire, and pleasurable excitement of removing the want. There is only one way to escape from this round, and that is to be content to rest in the neutral state. After all, this is the maximum of pleasure of which we are capable; any deviation from it may vary our pleasure but cannot increase it.

“The amount of pleasure is defined by the removal of all pain. Wherever there is pleasure, so long as it is present, there is neither bodily pain nor mental suffering, nor both.” The consideration of these elementary facts should regulate preference and aversion. Prudence demands the suppression of all unnecessary desires. Epicurus does not carry renunciation so far as the Buddhists, who hold that to live is to suffer, and explain the will to live as that instinctive love of life which, partly conscious, partly unconscious, is inherent in all living beings. They look for their rest in Nirvana. Certain things, says Epicurus, we must desire, because without them we cannot live, and life to Epicurus is worth living; and yet the repose which consists in the cessation of desire is, after all, not altogether unlike the Nirvana of the Buddhists.

In this negative conception of happiness as freedom from pain, whether of body or mind, Epicurus must have been influenced by the ethical teaching of Democritus, who also made happiness in its essential nature consist in the cheerfulness and well-being, the right disposition, harmony, and unalterable peace of mind which enable a man to live a calm and steadfast life. Democritus also exalted mental above bodily pleasures and pains, and laid stress pon ignorance, fear, folly, and superstition as causes of those mental pains which tend most to disturb life. With Epicurus the great obstacle to happiness is neither pain nor poverty, nor the absence of the ordinary good things of life; it is rather whatever contributes to disturb our serenity and mental satisfaction, whatever causes fear, anxiety—–in a word, mental trouble. To be independent of circumstances is his ideal; that a man should find his true good in himself.

In this negative conception of happiness as freedom from pain….