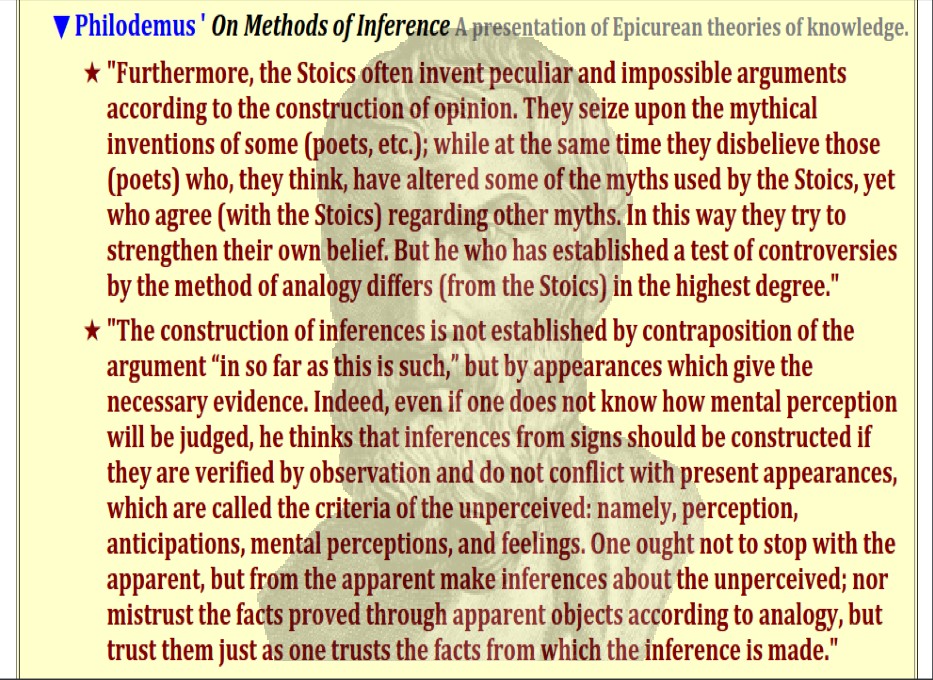 What do we do when we are confronted by differences of opinion among people who believe very strongly in their ideals, even though those ideals vary tremendously from person to person?  Do we decide that it is impossible to decide because there is no solid standard of proof when it comes to religion, philosophy, politics, or other contentious subjects?

The ancient Epicureans thought it was very important to answer that question in a way that contributes to, rather than undermines, our confidence in our capacity to live happily.  What follows is a brief passage from Philodemus’ “On Methods of Inference” that give us clues to the Epicurean approach.  The text is taken from Phillip and Estelle De Lacy’s translation published 1941 by the American Philological Association, “Philodemus – On Methods of Inference – A Study In Ancient Empiricism.”

But before we can make much sense of the text, let’s put into perspective several key terms which are necessary for us to begin to see what Philodemus is driving at:

With that background, let’s turn to Philodemus, as translated by De Lacy:

“Furthermore, the Stoics often invent peculiar and impossible arguments according to the construction of opinion. They seize upon the mythical inventions of some (poets, etc.); while at the same time they disbelieve those (poets) who, they think, have altered some of the myths used by the Stoics, yet who agree (with the Stoics) regarding other myths. In this way they try to strengthen their own belief. But he who has established a test of controversies by the method of analogy differs (from the Stoics) in the highest degree.”

“The construction of inferences is not established by contraposition of the argument “in so far as this is such,” but by appearances which give the necessary evidence. Indeed, even if one does not know how mental perception will be judged, he thinks that inferences from signs should be constructed if they are verified by observation and do not conflict with present appearances, which are called the criteria of the unperceived: namely, perception, anticipations, mental perceptions, and feelings.

One ought not to stop with the apparent, but from the apparent make inferences about the unperceived; nor mistrust the facts proved through apparent objects according to analogy, but trust them just as one trusts the facts from which the inference is made.”

The explanation given above should be of some help in grasping the background of the passage.  But what has not been commented on already is the most important aspect:  the conclusion Philodemus reaches.  And the importance is critical because the issue of how to think about difficult subjects is not just a matter of debate for philosophers – it’s crucially important if we are to live our lives happily.

And what Philodemus is saying is that it IS possible, and appropriate, to reach firm conclusions about difficult subjects.  In other words, we “ought not stop with the apparent.”  It is not necessary, for example, to stop once we realize that we are alive, and conclude that we can say nothing with confidence about death because we have never spoken with someone who is dead.

Even though we ourselves have never been dead, it is fully appropriate that we “make inferences about the unperceived.” and we do so “from the apparent.”  We take the evidence we have observed ourselves throughout our lives about dead things, and reason from that evidence about the deaths of ourselves and those who are still living around us.

Examine Lucretius and you will see that Epicurean philosophy is one long discussion of starting with that which is apparent, and from the apparent drawing inferences on which we base our lives and our pursuit of happiness.  If we are to live with confidence, we must not “mistrust the facts proved through apparent objects according to analogy.”  Even though we have never been dead ourselves, we must not mistrust the observations we have made about all who have died before us.  We can and must have confidence in our conclusions about death – a condition we have never been in ourselves – even though we have never been there to see it first hand.

In last paragraph I used the example of reasoning about death to make the point understandable.  The principle is extremely broad, however, and certainly not limited to death.  We face many questions in life which are much less emotional than death but are yet just as insolvable during our own lifetimes.  In facing those questions we must decide whether we are frozen in fear, like a deer in headlights, or whether we will have confidence in our decisionmaking.  The Epicureans counseled confidence but not foolhardiness – and the Epicureans counseled that we should certainly avoid the foolhardiness of those who come to believe that their abstractions are real.

Nature provides us faculties for living, and we are to trust those faculties and use them to the best of our abilities.