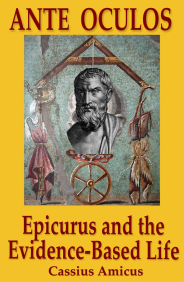 When humanity – BEFORE EYES – foully with life lay prostrate upon the earth, crushed down gravely beneath religion, which showed its head from the regions of heaven with hideous aspect, scowling down upon mortal men, a man of Greece was the first who dared to lift his mortal eyes and stand up against it. This man neither the fame of the gods, nor thunderbolts, nor even the deafening roar of heaven could quash, but those things only spurred on the eager courage of his soul, filling him with desire to be the first to burst the tight bars on Nature’s gates.  Thus the living force of his soul won the day, and on he passed, far beyond the flaming walls of the world, traveling with his mind and with his spirit the immeasurable universe. And from there he returned to us – like a conqueror – to tell us what can be, and what cannot, and on what principle and deep-set boundary mark Nature has established all things. In this way religion is thrown down and trampled underfoot, and his victory raises us equal with the sky.

The above lines are taken from Book I of the great Roman hymn to Epicurean philosophy, On The Nature of Things, written by Titus Lucretius Carus in the first century BC.  In Lucretius’ day there was no need to specify the famous name of the man of Greece who had burst the tight bars on Nature’s gates and trampled religion underfoot.  Today, however, the name of Epicurus, the man known to the ancient world as the “Master-Builder of Human Happiness,” is all but forgotten, and what memory of it remains is clouded with misunderstanding and misrepresentation.  The means by which this cloud may be dispelled is referenced in a phrase Lucretius uses –almost in passing – in the lines above, and for that reason this phrase has been chosen for the title of this book.

Epicurus won the devotion of Lucretius and millions of followers through the ages because he founded his school on the proposition that truth is not subject to the claims of priests, professors, or princes.  Epicurus taught that truth and reality do exist, that they can be found by men, and that on the foundation provided by Nature men can live in peace and happiness.  Thus when Lucretius employed the term before eyes, he was referring to truth established according to the faculties provided by Nature – a method of establishing truth recognized and taught by Epicurus with which religious revelation, philosophical skepticism, and the caprice of the rich and politically powerful are wholly incompatible.

Because so much of Epicurus’ work has been lost over the ages, there is a great need for new texts for the use of those who seek to study Epicurus for themselves, perhaps for the first time.  It is for the purpose of making the Epicurean texts more readily accessible that this volume has been prepared.  Thus the emphasis here is not on new analysis, but on providing new accessibility to ancient material in a new and understandable form – material which can then assist in providing a foundation and motivation for many future works.

Those who are unfamiliar with the personal history of Epicurus should turn first to the Appendix and refer to the biographical section of the work of Diogenes Laertius.  This ancient author wrote while Rome still ruled the western world, and the Epicurean movement was still strong, and it is he who preserved for us the majority of what is known today about the life of Epicurus.  The text of Diogenes Laertius forms the raw material from which most modern biographies of Epicurus is drawn, and it is here that the student who wishes to know Epicurus for himself, directly, rather than through the often-biased eyes of later commentators, should start.  For those who find this present volume and wish to move deeper into the study of Epicurus, this author recommends one book above all:  Epicurus and His Philosophy by Norman W. DeWitt.  No other work has done more to reacquaint the modern world with the true teachings of Epicurus.

As for this current work, our main text has been prepared in what is essentially a series of outlines proceeding sequentially from lesser to greater levels of detail.  The unavoidable result of this outline form is a frequent repetition of major principles at each level, but as the purpose of the work is to serve as a textual reference for the new student of Epicurus rather for than entertainment, it is to be hoped that this flaw will be forgiven.  The basic scheme is simple:  Chapter 1 provides a general overview of the main themes with which most new students of Epicurus are probably unfamiliar.  In turn, Chapters 2 through 8 address in greater detail a number of particularly significant aspects of Epicurean thought.  The greatest level of detail is found in Chapters 9 through 13, which contain selected narrative excerpts from the primary surviving documents of the Epicurean period.  Chapter 14 closes the main section of this work with an exercise in visualizing Epicurean doctrine through an ancient mosaic discovered in the ruins of Pompeii.  Chapter 15, the Appendix, provides additional primary source material, much of which is incorporated into the main text, if at all, only references for footnotes.  Much of the material here, for example the references to Epicurus in the letters of Seneca, is very valuable in its own right.

Just as with those Epicurean texts circulated in the ancient world, this text is not meant to be read once and set aside.  The student who wishes to apply the wisdom of Epicurus to his own life will regularly wish to refer, at a minimum, to the following selections:

The Principal Doctrines of Epicurus

The Vatican Collection of the Sayings of Epicurus

Epicurus’ Sayings About “The Wise Man”

Before closing this foreword, there is an important but disturbing aspect of this study which must be addressed.  As one proceeds in the study of Epicurus, this matter will grow from a nagging concern and eventually burst forth in questions that demand to be answered:

How has the wisdom of Epicurus become so nearly lost to the world?

How has the reputation of one of mankind’s greatest benefactors been consigned to such abuse?

The material in this work will answer these and many other questions, but be prepared to learn this bitter truth:

The material in this work will assist you in learning Epicurus’ means for overcomung these opponents.  But your time is limited:  as Lucretius wrote, life is a gift to no man, only a loan to him.  While life is in your possession you must exert yourself – as Nature provides – to achieve the happiness that is possible to you.  The wisdom to which this book is only a brief introduction is your legacy from the greatest mind of the ancient world.  Study and apply it, and it which will assist you in finding your own place in the Nature of Things.  Your goal is no less than that which Epicurus described to Menoeceus, no doubt with a smile:  the goal of living your life as “a god among men.”