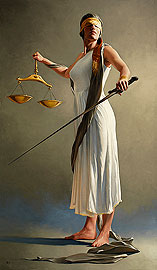 Wikipedia reports that use of a “blindfold” on symbols of “Lady Justice” is a modern innovation:

Since the 15th century, Lady Justice has often been depicted wearing a blindfold. The blindfold represents objectivity, in that justice is or should be meted out objectively, without fear or favor, regardless of identity, money, power, or weakness; blind justice and impartiality. The earliest Roman coins depicted Justitia with the sword in one hand and the scale in the other, but with her eyes uncovered.  Justitia was only commonly represented as “blind” since about the end of the 15th century. The first known representation of blind Justice is Hans Gieng‘s 1543 statue on the Gerechtigkeitsbrunnen (Fountain of Justice) in Berne.

I have not reached a final conclusion about this, but I question whether the blindfold reference would meet the approval of Epicurus.  Although certainly justice should be dispensed without fear or favor, the allusion to applying justice “objectively” concerns me as implying the Stoic view that justice is established by the gods or by the Fates and is therefore “absolute.”  It also seems to slight the Epicurean view that all sensations are to be valued and judged, and thus that it is essential to evaluate all the facts in judging a particular case.  Use of a “blindfold” seems to promote the view that one should intentionally blind oneself to certain facts, and that seems to me to be asking for trouble.

Here are several of the ancient texts that stress the importance of gathering and processing all available information (text from Epicurus.net):

PD22. We must consider both the ultimate end and all clear sensory evidence, to which we refer our opinions; for otherwise everything will be full of uncertainty and confusion.

PD 23. If you fight against all your sensations, you will have no standard to which to refer, and thus no means of judging even those sensations which you claim are false.

PD 24. If you reject absolutely any single sensation without stopping to distinguish between opinion about things awaiting confirmation and that which is already confirmed to be present, whether in sensation or in feelings or in any application of intellect to the presentations, you will confuse the rest of your sensations by your groundless opinion and so you will reject every standard of truth. If in your ideas based upon opinion you hastily affirm as true all that awaits confirmation as well as that which does not, you will not avoid error, as you will be maintaining the entire basis for doubt in every judgment between correct and incorrect opinion.

PD 25. If you do not on every occasion refer each of your actions to the ultimate end prescribed by nature, but instead of this in the act of choice or avoidance turn to some other end, your actions will not be consistent with your theories.

And here are the references to justice not being “abstract” but deriving directly from the facts of each individual situation:

PD 33. There never was such a thing as absolute justice, but only agreements made in mutual dealings among men in whatever places at various times providing against the infliction or suffering of harm.

Based on the Epicurean stress on evaluating all the facts, I tend to think the sculptors had it right in ancient times:  Lady Justice has no use for blindfolds.  What she does need to use is the wisdom that comes through the study and application of the principles of Canonics, Physics, and Ethics identified and left to us by Epicurus.