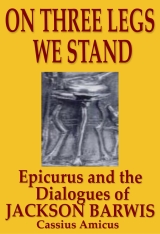 I have found the work of eighteenth-century writer Jackson Barwis to be of great interest, and I commend it to fellow students of Epicureanism.  Barwis’ work is built on his development of ideas that seem directly parallel to Epicurus’ concept of Anticipations.  The ebook now includes not only Barwis’ Dialogues Concerning Innate Principles, which is his most direct statement on the subject, but also his Three Dialogues Concerning Liberty and A Fourth Dialogue Concerning Liberty, which contain his expansions on how innate principles should be applied to concepts of good government.  The new title, On Three Legs We Stand, is intended to emphasis the crucial role of Anticipations in human life.  As of March 25, 2011, I have also added a new cover picture, this one taken from the famous Boscoreale skeleton cup.  The tripod is obviously the focus of the book and therefore the cover, but it seems appropriate to use this photo (rather than the first photo, which was a replica of a tripod from Herculaneum) because this one alludes to directly to the Epicurean connection, with Epicurus’ hand visible at the top left, and the snout of a hog from Epicurus’ herd visible at right.

I do not currently have the time to develop all the parallels that appear to exist between Barwis’ thought and Epicurus’ principles, but I hope to develop that in future editions.  In the meantime, if any readers have downloaded the first edition and read only the first Dialogue, please download the updated edition.  I am confident you will find that Barwis’ work is an excellent supplement to Epicurean studies, which will likely set off lights in your mind as to how many of the Fundamental Doctrines, and other references in Epicurus’ works, apply to how men should live.

The latest updated version can be downloaded for free here.

Previous ArticleThe Same Span of Time – The Major Works of Thomas Cooper, M.D.
Next Article“…I’m happy because it happened once.”