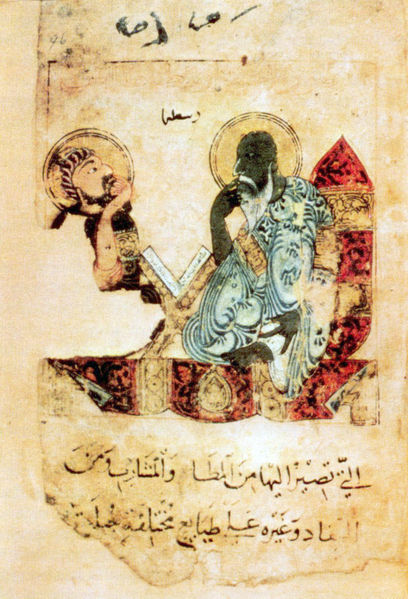 I am launching a study of Aristotle to document the differences between his philosophy and that of Epicurus. This is a filler post to keep track of those contrasts; these first few entries are very basic. Your contributions are welcome!

04/26/15 – My reading in “The Greeks on Pleasure” has finally produced what I have wanted for many years – a good quote to answer my friends who praise Aristotle to the sky on the advice of the Objectivists. Earlier today I got hit with the link below from the “Objective Standard, which for the umpteenth time credits Aristotle with all that is good in Western Civilization, with never a mention of Epicurus in sight.

For my friends in Europe, this is the kind of worship of Aristotle that has led large numbers of people in the USA to think that the only Greek philosopher worth reading is Aristotle: “By observing Judaism, Christianity, and Islam relative to the ideas of the ancient Greeks, we can see that the essentially secular approach of Greek culture—especially the rational method Aristotle developed—is responsible for golden ages and renaissances, both in the West and in the Middle East; and that the faith-based approach of religion, when intellectually dominant, is responsible for cultural stagnation and dark ages.”

You would think that paragraph would lead to at least a mention of Epicurus. I can’t access the rest of the article (link below) and I’m not going to pay a penny to find out – I know from long experience that references to “the Greeks” in Objectivist literature mean nothing but Aristotle, and only a demeaning word – if any – about Epicurus.

But the Objectivists, who pride themselves on their atheism, never get around to citing many quotes from Aristotle himself. Here’s one they will NOT want to cite anytime soon – a clear statement that the absolute good is “contemplation of God,” and what is bad is “any mode of choice and acquisition that either through deficiency or excess hinders us from serving and from contemplating God.”

From Eudemian Ethics, final chapter: “And since man consists by nature of a ruling part and a subject part, and each would properly live with reference to the ruling principle within him (and this is twofold, for medical science is a ruling principle in one way and health is in another, and the former is a means to the latter), this is therefore the case in regard to the faculty of contemplation. For God is not a ruler in the sense of issuing commands, but is the End as a means to which wisdom gives commands (and the term ‘End’ has two meanings, but these have been distinguished elsewhere); since clearly God is in need of nothing. Therefore whatever mode of choosing and of acquiring things good by nature—whether goods of body or wealth or friends or the other goods—will best promote the contemplation of God, that is the best mode, and that standard is the finest; [20] and any mode of choice and acquisition that either through deficiency or excess hinders us from serving and from contemplating God—that is a bad one. This is how it is for the spirit, and this is the best spiritual standard—to be as far as possible unconscious of the irrational part of the spirit, as such. Let this, then, be our statement of what is the standard of nobility and what is the aim of things absolutely good.” 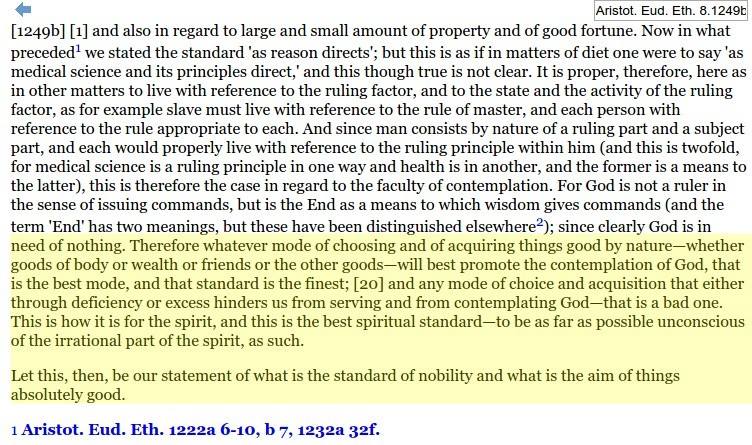 Here is commentary by Gosling & Taylor in “The Greeks on Pleasure” on the topic: 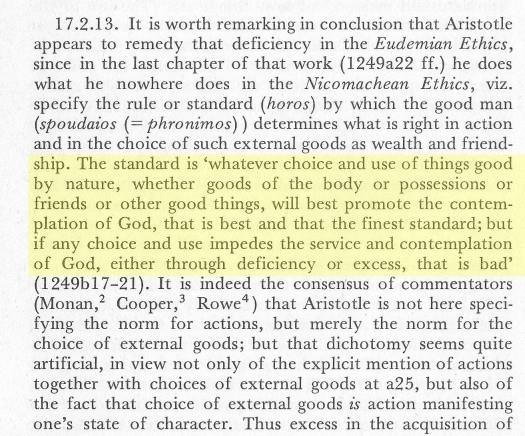 You won’t see this passage popping up in Ayn Rand circles, but for anyone reading this who has Objectivist-influenced friends, this is a passage they need to see. Maybe if they did, they would begin to be curious about the Greek philosopher who DID stand up to the mysticism and other-dimensionalism of Plato in a way that Aristotle never did. There was one philosopher of ancient Greece – and only one – who deserved this praise of Lucretius – and his name was *not* Aristotle:

“When human life, all too conspicuous,
Lay foully groveling on earth, weighed down
By grim Religion looming from the skies,
Horribly threatening mortal men, a man,
A Greek, first raised his mortal eyes
Bravely against this menace. No report
Of gods, no lightning-flash, no thunder-peal
Made this man cower, but drove him all the more
With passionate manliness of mind and will
To be the first to spring the tight-barred gates
Of Nature’s hold asunder. So his force,
His vital force of mind, a conqueror
Beyond the flaming ramparts of the world
Explored the vast immensities of space
With wit and wisdom, and came back to us
Triumphant, bringing news of what can be
And what cannot, limits and boundaries,
The borderline, the bench mark, set forever.
Religion, so, is trampled underfoot,
And by his victory we reach the stars.

You can access the original Aristotle quote at Perseus here:  http://www.perseus.tufts.edu/hopper/text…

Link to a share of the Objective Standard article:https://www.facebook.com/the.objective.standard/posts/10152834381479077

And the article itself: https://www.theobjectivestandard.com/…/aristotle-versus-re…/

References below are from Wikipedia.

2. Considered all men as friends, potential friends, or else people with whom to have nothing to do. Warned against indulging in political power.

1. “In metaphysics, Aristotelianism had a profound influence on philosophical and theological thinking in the Islamic and Jewish traditions in the Middle Ages, and it continues to influence Christian theology, especially the scholastic tradition of the Catholic Church. Aristotle was well known among medieval Muslim intellectuals and revered as ‘المعلم الأول’ – “The First Teacher”.

2. “Aristotle encouraged Alexander toward eastern conquest, and his attitude towards Persia was unabashedly ethnocentric. In one famous example, he counsels Alexander to be “a leader to the Greeks and a despot to the barbarians, to look after the former as after friends and relatives, and to deal with the latter as with beasts or plants”.[/one_half_last]